Abiy and Isaias, Radwan in the Middle. 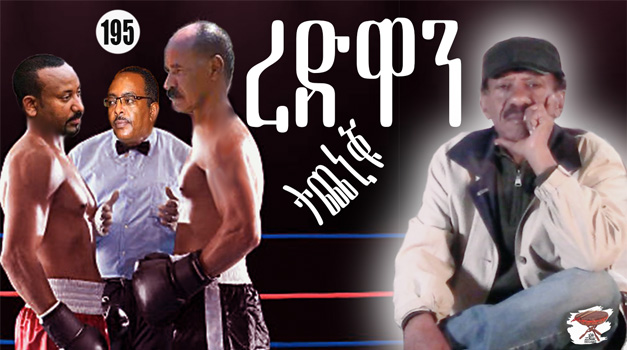 Ser’e is something forbidden by tradition be it mentioning or consuming. For instance, traditional women do not mention the name of their husbands and must refer to them as “father of so-and so”. Ser’e also forbids the consumption of certain foods and additives, like goat meat or salt. Likewise, partisans have Ser’e not to appreciate spelling out TRUTH that might expose the hidden stuff the officials they support. Luckily, I follow the dictum of no modesty or shame in defending people and their nations and I am not beholden to any ser’e.

This is the first in a series of the burning topic in the Horn of Africa, specifically the Ethiopian civil war and its outgrowth. It is a background to the current controversial agreement between the Ethiopian political parties, the current situation and what the future will look like—particularly focusing on Eritrea and it is expected to lose or gain.

Today I will present you the genesis of Isaias’s grudges as far as the peace deal is concerned and it has to do with his dislike of Radwan Hussein, the chief of the Ethiopian negotiations team.

Not a writer’s block but interruptions

Decades ago, in Baghdad I watched a Syrian television series, and it stayed fresh in my mind (yes, Syrians produced superb shows before the civil war destroyed their country). In a segment of the show, a writer, Hosni AlBurazan, who strayed in a hotel room started to pen something, but he never went beyond the first sentence: “If we want to know what’s in Italy, we must know what is in Brazil.” He couldn’t continue because an annoying cleaner, or the talkative landlady repeatedly knocked on his door and interrupted him. The writer stayed stuck in the first sentence.

I remembered the show after November 2 when the Ethiopian peace negotiators in Pretoria issued a statement. Many people hastily read their wishes in the statement, not what the actual articles of the agreement stated. That was followed statements by certain officials stating there were several draft versions of the agreement. That didn’t help the situation. The debates worsened and some partisans celebrated and declared victory, whatever that meant.

I imagined Isaias Afwerki saying, ‘If you want to make peace with me, remember I don’t like Radwan Hussein.’

Forecasting without studying the past leads to wrong conclusions, like prematurely celebrating anything. Awate.com and Gedab News have been providing ample information but unfortunately, many were blinded by partisanship and prejudice to grasp what was developing. Some keep driving with a broken rearview mirror and do not care to check available information published three or four years ago, forget ten or twenty years.

For those who remember the events, you may skip the refresher, those who might have forgotten, I will try refresh your memories, and those who are oblivious to the past, I hope this episode will provide you with a glimpse of the past so that you will navigate with a clean rearview mirror. My slogan is Awate.com’s slogan: Inform. Inspire. Embolden. Reconciliation.

Isaias has invested heavily to stay in power indefinitely. I would dare say he thinks of himself as Methuselah who will live for centuries. That’s why he endlessly squanders the resources, the wellbeing, and the goodwill of Eritrea to serve his policies. He is a vengeful person who harbors grudge for real or delusional reasons. That explains the never-ending, on-and-off feud with his nemesis, the TPLF.

How about the rest of the PFDJ leaders, do not have a say? Not at all, they are helpless wagons pulled by a train that takes them wherever it wishes. But there is a deeper explanation to the primordial PFDJ-TPLF rivalry. They are locked in a decades old feud each pursuing a goal to become the senior partner among the Tigrinya speaking elite of Abyssinia. But that includes the Amhara elite as well, they always come at the right moment to force the postponement of the rivalry. But in calmer years, the other social and political groups are put in the receiving end.

This time the team spirit of the two was broken by Abiy’s prosperity party. It encouraged the segments of the region that felt historically victimized by the Abyssinian hegemony, to rally behind the warring parties and get involved in the fry. While the Ethiopian segments rallied behind Abiy, the Eritrean side stood behind Isaias under mediocre pretenses. Now that (at least until recently) Isaias and Abiy are allied, the Ethiopian and Eritrean politically disposed segments are riding on the Abiy-Isaias wagon.

Of course, the nostalgic Eritrean Ethiophiles are on that train as well. In addition to the Tigrai-Tigrinya fascists who seem temporarily neutered, if they have run out of steam, the Agazian Tigrinya nationalists, the racists, the supremacists, and the Werobella— (the equivalent of a bandit, but literally it means one who invaders for food.

Radwan squeezed between Abiy and Isaias

On July 9, 2018, Isaias Afwerki and Abiy Ahmed signed the first so-called “peace agreement” in Asmara. They signed it again in Abu Dhabi, UAE, and again in Jeddah, Saudi Arabia where they were given expensive gold necklaces! In Norway, they awarded Abiy the Nobel peace prize; his partner Isaias Afwerki was excluded and didn’t even attend the hasty ceremony.

The two countries had recalled their ambassadors in the wake of the 1998-2000 Baddme border war about two decades earlier.

On his first visit to Ethiopia in July 2018, after the agreement he made with Abiy, Isaias “reopened his country’s embassy in Addis Ababa.” On November 15, 2019, Gedab News reported, “after more than a year in Limbo, Radwan Hussein presented his credentials to Isaias ” The report irritated several Ethiopian and Eritrean officials who didn’t like the expose of the crisis.

Isaias is not fond of Radwan Hussein; when Radwan was the minister of communication of his country from 2013 to 2015, he made a few statements that irritated Isaias, a reason for Isaias’s refusal to accept Radwan’s ambassadorial credentials. Also, the issue discomforted Abiy and the UAE intervened. It urged Isaias to help dispel the negative media by resolving the issue. After fifteen months in a limbo, on December 4, 2019, Ambassador Radwan finally presented his credentials to Isaias Afwerki. Consequently “an Ethiopian cultural troupe was hastily assembled to tour Eritrea to eliminate the negative news about the Radwan crisis which could harm the relations between Abiy and Isaias.”

As a coverup, Ethiopia planned a hasty visit by an Ethiopian cultural troupe to Eritrea. Radwan Hussein was so busy organizing the shows of the troupe, that some Eritreans likened him to a bride’s mother, (ummalArous, abbo-merAt), who hectically prepares a wedding ceremony. Radwan had enthusiastically planned the Ethiopian cultural troupe’s tour in Eritrea.

When Isaias visited Addis Ababa during Christmas week of that year, Abiy agreed to pull Radwan out of Eritrea. A few days after Isaias returned to Asmara, Radwan was ordered to pack and return to Ethiopia and was appointed the Minister of State at the Ethiopian Ministry of Foreign Affairs replacing Marcos Tekle. However, at about the same time, an internal crisis was brewing between the Ethiopian Federal Government and the Government of the Tigray State.

At Bole Airport, a six-member Chinese delegation were asked to disembark from an airplane which was about to leave for Mekele. The Tigray government accused the federal government stating it was not the first-time travelers were denied permission to travel to Tigrai. While Marcos Tekle, the previous minister of State at the ministry of foreign affairs, stated that the Bole Airport incident happened without the knowledge of his ministry. And that created an inter-government friction.

Gedab News reached out to several keen news observers in Ethiopia for information on Marcos’ resignation and they said, “no one is sure if Marcos resigned or was forced to resign from his position to complete the Radwan Hussein puzzle.” But most likely, “Marcos Tekle became the fall guy to trivialize and cover up the Radwan Crisis” with Isaias.

Did Isaias forget his grudge against Radwan? Of course not. The vengeful man would not forget Radwan’s statements during the pre-Abiy era and considered him a pro-EPRDF person. To irritate Isais more, now Radwan come as head of the Ethiopian negotiations team in Pretoria.

Anything Radwan or others did in the past is looked at through Isaias’ grudge measuring lenses; in Isaias’s memory, grudges do not age with time, forgiving and forgetting is only a character of noble persons.