Time To Clean Your Own Courtyard 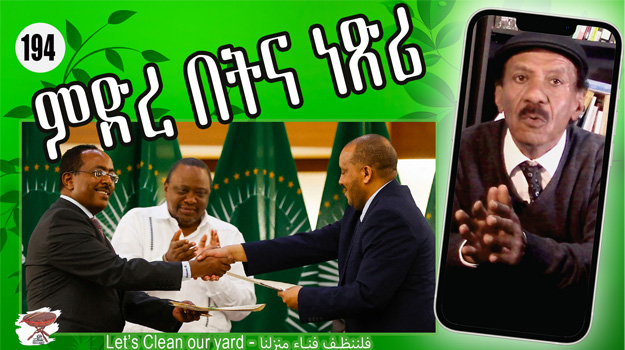 During the Baddme war that ended in 2000, I wrote that finally the leaders will sign a paper and it happened after so many lives were lost. I have been repeating that for decades, and as recently as two weeks ago. Last time I was relieved when the guns stopped and an agreement was signed, The Hague court passed its verdict to close the case. Unfortunately, the political mischief did not stop but continued for over two decades, denying the people of the region peace of mind and stability. People continued to be incarcerated, killed and humiliated for that long. Worse, a new cycle of hostilities was ignited two years ago, and it wasted more lived than the previous war did. This time it didn’t spare cites and villages that were razed to the ground by drones and fighter planes.

Finally, about two weeks ago, the two parties of the conflict were brought to a negotiations table in Pretoria, South Africa. Ethiopian delegates, together with African and international statesmen and diplomats engaged in a marathon negotiation that went on for twelve days.  On Wednesday, they reached an agreement to stop hostilities and a host of other issues pending technicalities and implementation. Now I started to worry.

The last time around, neither the signing of the Algiers agreement or the International Court verdict stopped the hostilities. It failed to bring about peace. The people were denied the right to live in peace and dignity. And I worried for a while: Will the fate of the Pretoria agreement be the same as the Algiers Agreement?

This time, the stakes are higher, and the destruction so far is colossal–I am hoping the Pretoria Agreement will bear fruit, and we cannot afford but be positive.

However, I have a concern: will the criminals who wreaked havoc in the region be punished for all the crimes they committed? Will the killers and looters be left Scott-free? Will they be brought to a court to set an example, a lesson that Africa miserably failed to learn? I hope the AU will set a tribunal to try the hate mongers, the inciters, the agitators, and they enablers so that potential criminals know there is a consequence to every wrongdoing. Victims have a right to seek retribution for the crimes inflicted on them. But still, this time I hope the Pretoria Agreement will lead to a lasting peace though I wish the following practical steps are taken seriously to help in the process:

Most Eritrean propagandists were emotionally vested in the Ethiopian civil war with the excuse of protecting Eritrea’s sovereignty. Anyone who ignores the sovereignty of Eritrean citizens is not qualified to pretend to care for the sovereignty of the territory—both are inseparable.

What is sovereignty of a nation if its people do not enjoy basic rights and basic legal procedures?  Of course, it’s well established that Eritreans do not respect their government, but they fear it. The nation is terrified by their supposedly national government! If a government is unfair, unjust, cruel, and inconsiderate, it can’t win the respect of its citizens. But it can make them fear it because it uses the military might, the security control, and the monopoly of trade and national resources. It controls the fate of the nation; the instruments of governing have equated its sovereignty with that of the nation and thus made the people feel it’s divine.

Some Eritreans cannot understand the concept of sovereignty in alienation of the army, or its leaders, or wars. In their minds, they are inseparable. If the army wins a battle, the sovereignty is protected, and they rejoice. If it loses a battle, the sovereignty is at risk and must start another round of battles. Thus, ruling has become akin to commanding a military barrack. That is why political acumen, diplomacy, and statesmanship lost their meaning in the understanding of the rulers of Eritrea who are experts on failed governance.

Hopefully the Pretoria Agreement will hold. For a change I wish this time the urge to renew the conflicts is subdued, and the culture of a non-stop war is shunned. Only then will the elite of the region demand tens of thousands of lives to sacrifice for the demons in cycles of one generation or so. This 850 years old ritual of bloodshed in Abyssinia must stop.

It’s time for a reconciliation, for a sober assessment of the last three decades of instability and oppression. Our tools of governing must be changed, starting with the main actors who failed thus far. Of course, this will make more sense once the books are reconciled to show the number of lives lost, the opportunities missed, and the psychological trauma inflicted on the people. I hope the armed forces understand they are the protectors of the people, not unelected rulers. The first task of an army is to protect the sovereignty of its own territories. It can march outside its territories only by a dully approved decision of its legislators. Otherwise, it must step back march towards its barracks… after protecting the people elect their government. The army remains the guardian of the peoples’ choices and security. And is that condition is met, citizens are obliged to throw their full support with their elected government and the army. That is what is expected of true patriots; any less is pseudo-patriotism, fake patriotism.