Berekhet Mengisteab on the Answering Machine 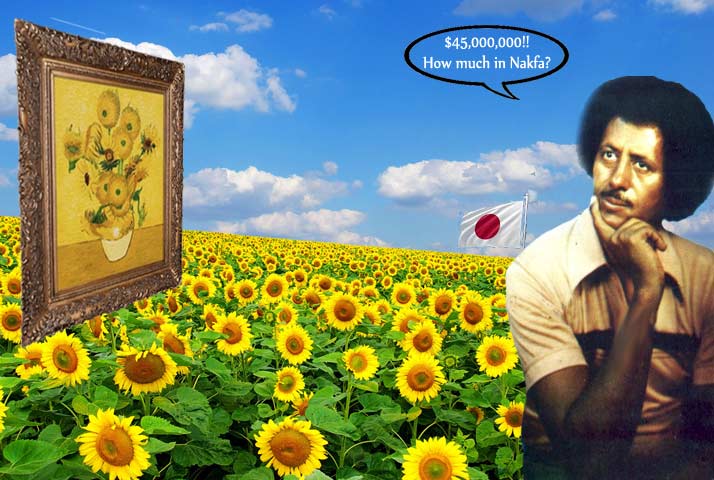 [‘Nonsense’ is the secret word, which is no more secret. If you have something better to do, I suggest you do not waste your time reading this nonsense. However, if you can spare the time ….]

He was very excited when he showed me a rock sitting on his palm, and said, “Look, this rock is 2 Million years old.”

He was furious because I underestimated the importance of his rock.

Earlier I had called a number to apply for a job, and there was a recording on the other
side of the line: For sales, press 1; for accounting, press 2; for the hiring department, press 3; for……

I needed a job, I pressed 3. The recording echoed: The line is busy right now, if you want to hold, press 8; if ….

I decided to hold and pressed 8; to my surprise, there was an oldie playing: anta baal karrosa mlesa mlesa ….

Excellent! Berekhet made it to the answering machine! I was optimistic I will get a job with this call-not-replying-Berekhet-playing corporation. I am still unemployed.

Yes. You are absolutely right, I want a job.

“What can you do?

He frowned and said, “Do you want to live and work in Afghanistan?”

Afghanistan? Yes, why not? I am not afraid of dying. Furthermore, the great poet Abu Tayeb Al-Mutenebi said, ‘m’n lem-yemotu bisseifi mata bqeyrehu. teAadedet al asbabu wel maotu waHidu’ (He who doesn’t die by a sword will somehow die. numerous the means might be, but death is always the same.)

He interrupted me. “Okay. Stop that. Poetry is the last thing you need in Afghanistan. The whole life in that damned country is an inspiration for tragic and sad poetry.”

I nodded, well, you said you have a job for me, yes? What kind of job?

He hesitated and then said, “Three jobs. A grave digger, and a scrap-metal trader. The third job is gone.”

What was the third job? Who took it?

His reply came in a matter-of-factly way, “farming hashish. A compatriot of yours took that job. He added, ‘While some of his compatriots are Afghanistaning their country others are busy intoxicating the people.”

I sympathized with him. Talking about getting high, are suicide bombers high when they blow themselves into pieces?

“The Russian colonel said that was the case.”

How about the fruit vendor?

“The fruit vendor said, Shalom. When all is said and done, only the two original people of the area will remain: Arabs and Jews. But the Russian it seems, was high on the wicked weed.”

Helplessly I said, maybe I should go to Rwanda, or Burundi.

Because I am an African!!

“Land mass! You think you belong to a land mass? Was your grandfather an African? Did it occur to you that he might have been Asian, before they tore the two continents apart… by digging the Suez Canal?”

I don’t know. But I live in that land mass. Besides, it is safe to say I am an African. Nobody will try to bite my head off. That ID is cool, and trendy. Like in the 60s. Harambe Africa! Uhuru!

He started to give me a lesson in geography, “The Saudis, the Indians, Koreans, and
Chinese are all Asians.”

So they are, so what?

“Congo, Nigeria, Chad, and Eritrea are in Africa. Singapore. Yes, Singapore is in Asia.”

Still confused, I asked: So they are, so what?

He assured me “I am just thinking loudly.”

I pleaded, “Could you think a little louder.”

He volunteered another tip: “The Afar claim they lent their name to the continent, true?”

I was dumbfounded. Could be–Afar……Afreeqya!! Could be! It is just a name.

He bit his lips and said, “You are hallucinating. You have become crazy. May God save your troubled soul and your left-minded brain.”

“Amen of the corner?”

He was getting into my nerves. No. I do not do my Amens on any corner. I do them in
open spaces.

“What is wrong with Amen in a corner?”

I protested: too narrow. I do not like to be cornered. Do you see that!

He became edgy, “I do not see it! Are you calling me blind?”

I tried to calm him down. Well, No. I am saying this is ‘Helmi derho’…

He burst, “what does that mean? I know ‘derho’ is chicken. Are you calling me a blind chicken?”

I tried to be assertive. LISTEN! If our chickens go blind, we grill them for lunch. We do not keep blind chicken. I am talking about culture, heritage, posterity… We want to preserve ‘Helmi dorho’ just like nature preserved your 2 Million-years old rock. If chicken can dream, why can’t we?

He suggested a solution. “Why don’t you try something else?”

He confidently replied, “May be became a bourgeoisie.”

Uninterested, with a smile I said: Someone is already trying to become one, for over two months now, from inside a shell!!

He wanted to know. “How is he doing?”

With bitterness I said, “I wish I could smoke him out of his shell so that I can find out. But, I think he is still a proletariat–rehitse bella’e, he will not be promoted to the Bourgeoisie class that easy.

He shouted “Stop. Stop. You have done enough smoking already.”

I assured him: No. I will call the ghostbusters if that is what is needed to get this man out on the Dehai screen.

He looked fed up. “What if he refuses?”

Again I assured him: Don’t worry, he will not. He is coming out soon.

With pity I said, nonsense! Okay. Here is a tape for you. Enjoy it: anta b’aal karrosa mlesa mlesa … The karrosa needs to be steered straight ahead.

He wouldn’t give up the topic, “why is it important to become a bourgeoisie anyway?”

Simple. Because only then you can buy expensive paintings by weirdos with weird names: Pistachio, Fan cough, etc. How else could you buy a Sunflower painting for 45 million Dollars?

In surprise he said, “What? You can buy the entire sunflower farms in Italy for that much. And, it will not be on a canvas, but real sunflowers.”

I borrowed his favorite word: nonsense. Can you imagine a Japanese tycoon framing an Italian sunflower farm (though Italian Signoras don’t let go of their farms easily) and hanging it over his fire place?”

He thought for a while and then he said, “I wouldn’t put anything that cost more than
50 Dollars near any fire!”

I smiled, unless you have a fire brigade on alert, 24 hours a day.

He looked worried, “and the Signora?”

He was annoying me, forget the Signora. She has become like a sunflower always leaning towards the sun. Hell breaks loose if clouds appear on the sky. She sells lots of real sunflowers and counts a few Liras, when a small imitation sunflower fetches millions of dollars!

I told him what has happened: the Signora called the Japanese tycoon on the phone with a proposal. She was put on hold and, you guessed it, Berekhet was playing on the answering machine, on the Japanese side: abti Edaaga aitebzHa wagaa….

“Pronto. Hello, this is Signora…”

The Signora asked the tycoon: “can I send you a fresh sunflower every morning, by courier, for a fraction of the price you paid for that stupid thing you call a painting?”

The tycoon was angry. Before he slammed down the phone he screamed “Stup-pido. Igno-ranto…Tora. Tora. Tora.”

From that day on, it has been Tora, Tora, Tora on the heads of all Italians, and Tora, Tora coupled with Zeraf, Zeraf on the heads of the rest of us. My advice: Find yourself some classical Berekhet tapes and listen to them until you became deaf and mute.