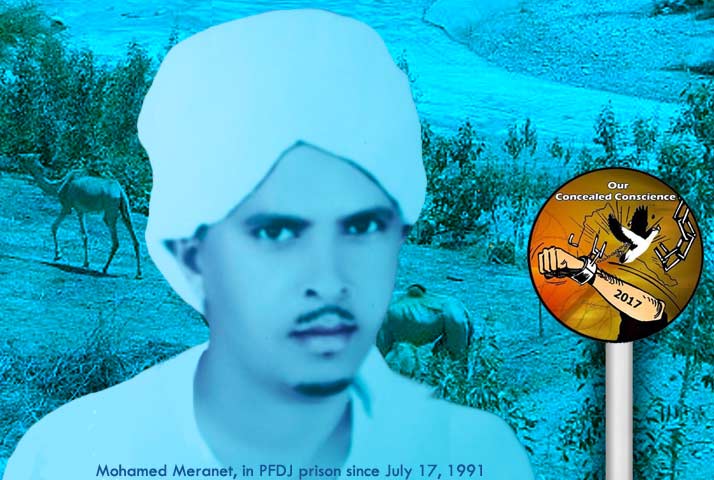 The 14th of April is when the Prisoners’ Day is commemorated. It’s a day that Eritreans remember their prisoners to spread awareness of the plight of their loved ones, and they remember so many of them. Some who grew old in the dungeons of the cruel Eritrean regime, others rumored to have died in captivity, still others who are suffering from serious illness, lost a limb, eyesight or something else. But they all lost the most vital thing in life: Freedom.

I couldn’t also write about Am Abdulrahman Younis, the nonagenarian who treated me like his friend, like his peer, and who shared taboo jokes with me, and who told me stories about old Keren that is now a knowledge I own. I could write about Abdulaziz Neberai, the brother of the martyr Beshir Neberay, my closest childhood friend. He was snatched from his bed over twenty years ago never to be seen again. I could write about many others whom I knew through the thin and thick of the struggle era, but they are too many.

That is why I settled for writing a representative story, and I chose to write about Mohammed Mranet, the man in whose hands I was initiated to join the organized Eritrean struggle. Unfortunately, I never met Mranet again since we met in his hut in Ad-Habab some forty-years ago. Mranet is from Betjuk, but when I was there, he was arrested by the Derg and was languishing in jail. Ironically, he was jailed by the Derg for being a patriot, and now he is jailed by the PDFJ, who were supposed to assure his freedom, but instead they imprisoned him in worse conditions than the Derg, for since Juy 17, 1991, for 27 years, and they have made him disappear. They stripped him of his freedom, and they probably murdered him.

I tried to immortalize Mohammed Mranet in my book, “Of Kings and Bandits”, through the character name Osman. In this Negarit edition, I decided to disclose his real name, Mranet. Mohammed Mranet was a judge who was imprisoned by the PFDJ in the early 1990s and made to disappear in their dungeons, nothing was heard about him to this day.

Below is a part of the story from my book “Of Kings and Bandits”; I revised it to reflect his real name: Mohammed Mranet.

….Jemal never thought of the swirls when he threw pebbles into the Shfshfi Lake. He believed the river would carry his pebbles miles away to some bank, or maybe over time dissolve in the water like grains of sugar in a hot cup of tea. He never thought of the ripples and its silent swirl as a forecast of the future of his generation being pushed out.

For a while he dreamed of growing up, aspiring to become a professional, to have a family of his own. But his generation stopped dreaming the moment it learned to have them and if they did, they were extremely short dreams that didn’t go beyond the present—Janhoi seemed to own their future. Only those who joined the rebellion could own their dream. The moment they joined the rebellion, they became role models and celebrities and made the young feel jealous. They visualized the older boys armed with kalashnikov guns, clad in khaki shorts and shirts, avenging the helpless civilians who were abused too much, for too long. They were convinced beyond any doubt the Jebha rebellion was a noble and selfless resistance—a cause worth living and dying for. Jemal was eager to grow up, quick!

The summer he finished seventh grade, his voice got huskier. Thanks to Am Raki, the circumciser, he had become an adult two years earlier. He heard of secret cells that operated among the students to support the rebellion and wanted to be part of the big cause. Ahmed the shopkeeper had smiled in a way that assured Jemal he would help him realize his wish of becoming part of the rebellion. “Friday,” he had said without explaining further.

On a Friday afternoon, Jemal walked with Ahmed to the Ad-Habab area on the edge of town and arrived at a small creek, where a man sitting by the side stood up the moment he saw them. Jemal remembered him, Mranet, the man to whom Bakri and his friends handed wads of money. They shook hands with Mranet and then he led them up the edge of a hill to a hut whose doors opened towards the creek. Ahmed introduced Jemal: “He wants to be part of the struggle,” he told Mranet.

He then talked about secrecy, loyalty and courage and that Jemal was joining a cause that might cost him his life if he was not careful. Then he lectured Jemal about the rebellion, patriotism, sacrifice, and dedication. He kept emphasizing, “Make sure you finish school before anything else.”

Mranet asked Jemal to choose a secret identification number. “Any number that you can remember,” he said.

Jemal remembered his sixth-grade student ID number: 471. Mranet noted it in a small notebook and asked Jemal how much he would afford to contribute. Qerrab, 25 cents, a month, Jemal had said.

The tense wrinkles on Mranet’s face were now relaxed. He repeated the same warning, about secrecy and loyalty to the cause, before he stood up and walked towards the door. It was a sign that they had to leave. “Ahmed is your contact,” Mranet had said before shaking hands as he saw them out.

Jemal became a member of a clandestine cell of Jebha, he felt like a real man; but he didn’t know he had bid his childhood goodbye. He had the urge to talk to Mranet about Degiat but he didn’t. He remembered that as a new-recruit, he is supposed to begin walking before he can run.

Jemal felt like a man: circumcised, thanks to Am Raki, and a member of the rebellion, thanks to Ahmed and Mranet. His teeth that had embarrassed him for too long had filled in. He felt a man on all counts. Jemal touched his teeth—both had fully grown back, thanks to Dr. Ahdeh.

Bakri had taken Jemal to Dr. Ahdeh’s clinic when his top incisors refused to grow after he lost them as a child. For years, he had suffered waiting for his teeth to show. They didn’t. Jemal resisted smiling because children ridiculed him for his sheraf, window-teeth. It was even more embarrassing around girls, at a time Jemal yearned to be an adult and tried hard to act like one, finding it impossible to act older with missing teeth. Bakri recognized his anxiety and Jemal ended up in a chair in Dr. Ahdeh’s clinic, in a building across the Grand Cathedral in Asmera. The X-ray showed that two extra teeth inside the gums blocked the incisor teeth from growing. Ahdeh had extracted the hindering teeth and assured Jemal his teeth would grow in a few weeks time. They did. Jemal liked Dr. Ahdeh and thought of him as the best doctor in the whole world. Whenever he visited Asmera, Jemal made sure to visit his clinic; it was almost a ritual.

Earlier, a relative had suggested that Jemal visit Mubarek, the healer, “Maybe the devil is blocking your teeth,” he had told Jemal.

Everyone in the town knew that Mubarek the healer controlled jinnis and treated patients with mental problems. “I am not insane, it is just my teeth,” Jemal had protested.

“Believe me, it is the devil,” the relative had said.

Sick people from all over the country flocked to Mubarek for treatment with a mixture of roots and herbs—and prayers. If that didn’t work, a serious type of treatment followed—he knew how to deal with evil spirits that caused most sicknesses. Mubarek whipped and slapped insane people until the unruly jinnis that possessed them came to their senses; most calmed down after a slap or two when the jinni could not bear the pain anymore.

A car once brought an Italian man from Asmera to be treated by Mubarek. The uncombed man sat in the middle of the backseat restrained by two men sitting on his sides. Jemal never thought Italians could become insane until then.

After a few weeks of treatment the condition of the Italian patient must have improved. Mubarek allowed him to roam the streets and the man went straight to a grain mill, jumped into its engine pit, and began to toy with the machine. He had refused to get out until a muscular butcher who happened to pass by jumped into the pit, carried the man out like a sack of grain, and took him back to Mubarek. The healer beat him up so hard the man fell down to the ground and begged for mercy. “Why did you make him do that, why did you put his life at risk?” Mubarek shouted. The man stuttered and spoke gibberish; some people thought it was the jinni speaking in tongues.

The jinni didn’t reply, but the patient wept and pleaded for mercy. Mubarek brought a chain, tied the man’s hands with it, secured it with a padlock, and led him to a room like a dog on a leash. The patient followed obediently.

Jemal was happy he didn’t heed his relative’s advice. He was thankful to Bakri for taking him to Dr. Ahdeh the dentist.

You can order “Of Kings and Bandits” here