Major Dawit woldegiorgis: A Politician or a Soldier? 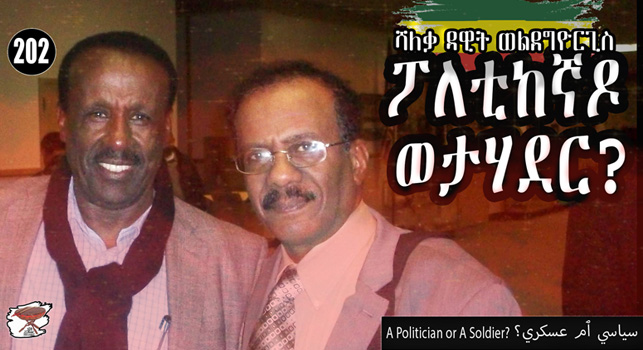 I have followed Shaleqa Dawit for a while and we had a brief exchanged views a few times. In weeks he has been active on Ethiopian diaspora circles, and I was curious to know what he is up to. To my dismay, he is still insistingly spreading his misconceptions about Eritrea and I would like to volunteer some corrections.

If you are wondering why I am interested in Shaleqa Dawit, it’s because he is the embodiment of the typical Ethiopian politicians and elite with all its deficiencies.

Thanks to Meaza Birru who conducted an extensive interview with him on Sheger FM (my favorite Ethiopian channel), now I know more about Shaleqa Dawits Woldegiorgis.

Shaleqa Dawit is a graduate of the Harer Military academy and Debrezit air force base (trained as an airborne officer). His first assignment was in Eritrea where he witnessed the abortion of the Federal agreement by Haile Selassie. He later studied at Haile Selassie university and graduated with an LLB, followed by a law degree from Columbia university. Under the Derg, he worked as a deputy foreign minister, as a representative of the Ethiopian Workers Party, as governor of Eritrea, then as a commissioner of the Ethiopian famine relief program. In 1985 he abandoned the Derg and applied for asylum in the USA . In 1989, he was engaged in a coup attempt against Mengistu Hailemariam by the Ethiopian military commanders stationed in Asmara—over a dozen senior commanders were killed after the coup failed. Shaleqa Dawit claims to have been coordinating between the EPLF and the coup leaders. He has also worked with different NGO’s and to this day he is active in Ethiopian (and Eritrean) politics. Several Eritreans have told me that Dawit’s rule in Eritrea was compassionate, and he saved a few people from ultimate death.

Now that I provided a glimpse of Shaleqa Dawit’s background to those who didn’t know him, let me proceed to tell you about my problem with him.

The Shaleqa has been hyper-active in Ethiopian media channels promoting the Isaias-Amhara alliance. Never mind his “our alliance with Eritrea,” he means the Amhara alliance with Isaias. I wish to remind him (though he knows it) that Isaias represents only himself and his ruling cult, not the rest of Eritreans.

In the extensive interview I mentioned above, the Shaleqa makes some mistakes; I am volunteering some information or corrections.

1. Ayn-Seba’e (according to Dawit, Ye-Saba ayn or Saba’s eyes). Wrong. In Arabic, Ayn means “mnch” or source, not the human eye. It’s like Lake Tana is the eye of Abay. Abyssinians claim the Queen of Sheba as their own and by making connections to her, he is pushing the Isaias-Amhara alliance. There is a river in Eritrea called Anseba, from Ayn-Seba’e. It’s like referring to Haile Selassie as King Ethiopia instead of the King of Ethiopia.

2. Most Abyssinians think of Saba as the legendary queen’s name when Saba is a region, a kingdom in ancient Yemen. There was no queen named Saba in history but Belqis (for the Arabs) or Makda/Makeda (for the Abyssinian). For the rest, it’s the Queen of Sheba, not Queen Sheba.

3. The capital city of the Kingdom of Seba’e was Maareb, and there is a major river that flows from central Eritrea to Sudan, it is also called Mereb.

4. There was a commonly used tole painted beer can in Eritrea that carried a bust of king Minelik. But it was not thus named because Eritreans adored king Minelik as Shaleqa Dawit claims. Minelik was a brand name and a product positioning. It was made and introduced by the Italians when they ruled Eritrea. But for Eritreans, they couldn’t even pronounce his name properly and corrupted the Minelik to Mlelikh. Eritreans accepted the new cup (Milelikh) slowly replaced the traditional bull horn cups.

5. I am sure most of you know the Eveready battery. All over Western Eritrea, it was known as Abu-Kedis (Sudanese slang for cat) or in Ethiopia “Bale Dmmetu batri dngay” (the cat battery). Eveready’s logo is a black cat passing through the circle in the Number ‘9’–a clever tie with the superstition—cats have nine lives.

Major Dawit’s presence at the Parliament

The Major sounded as if he and his soldiers were at the parliament in boy scout uniforms! But they were armed to the teeth to make sure the parliamentarians were intimidated enough to vote as required. Why would soldiers attend a major voting session inside a parliament? They were not innocent bystanders or in a ceremonial parade. Incidentally, I have responded to this misleading information when he wrote an article (link below). But since he keeps repeating that in his interviews, I will keep repeating it as well.

I can’t blame Dawit for emphasizing on the ELF as Muslim organization. Most Ethiopians (and Eritreans are so brainwashed they wouldn’t change that perception—but one would expect a little honesty. Were there Christian entities? Dawit wouldn’t mention it.

True, most Eritreans who rebelled were the underprivileged though ahead of the Derg who woke up decades later to declare Meriet L’Arashu (Land for the Tiller). I am sure Major Dawit talked about that in the ESAPA progressive party meetings. Incidentally, the land reformation act was the only thing worthy of my admiration.

Dawit knows all those who voted for union with Ethiopia were privileged degezmatch and qenazmatch dignitaries. They were just like the feudalists his derg party deposed along with Haile Selassie. They were loyal to the king because he provided them with income, privileges, and stature. Ironically, Shaleqa Dawit mentioned how the king has linked many of the feudal class through marriages [and through titles and benefits]. Then, why would one expect them to vote against their master, and provider of their livelihood?

Knowing my position on Isaias, would anyone bring me to be a judge and try Isaias? That would be against neutrality and shouldn’t happen.

That Zewde Retta block was a diplomate serving Haile Selassie, and he very biased. His bias is evident. Annoyingly, Zewede Retta described the great emancipator Ibrahim Sultan as a brute! Take note, it’s Ibrahim Sultan who emancipated the downtrodden Eritrean serfs. No unbiased person would quote Zewde Retta to support his case against Eritrea–Zewde was a servile partisan!

In the 1950s, a big chunk of Eritreans lived in the rural areas that Shaleqa was not familiar with. There were protected areas of loyalists where the clergy coerced into supporting the dissolution of the Federal agreement and union with Ethiopia under King Haile Selassie. Of course, those who didn’t support that position, or were members of competing parties, were excommunicated from the church. Any Christian, and Dawit attended church school, knows the consequences of excommunication in the lives of the religious people of the countryside. They don’t want to end up in hell—they wanted peace in this world, and paradise in the hereafter. That’s what the blackmailing clergy preached, Haile Selassie Amlak said so. They were intimidated, blackmailed, and fear God’s anger; they voted for the unionist party.

Correction about the Founder of EPLF

The EPLF was not founded by Isaias whose group was named Selfi-Natsenet; PLF was founded by Osman Saleh Sabbe who split from the ELF. Initially it was called ELF-PLF but in the mid-seventies it changed its name to EPLF. The split of Sabbe and PLF had led to a power struggle and internecine battles. Isaias and his group were left alone but then joined the Sabbe group in a battle. Soon they merged with Sabbe to secure funds and supplies. I will leave the religious affiliation of these groups to Shaleqa Dawit.

The four fragments of the PLF merged under the field command of Ramadan Mohammed Nur, but soon, the field command rebelled against Sabbe. Just like Mengistu stayed under the surface below Teferi Banti and Atnafu Abate, Isaias stayed below the surface and finally took over. He erased all history; a substitute history is being taught by Major Dawit.

Now to the biggest intoxicant (and our biggest predicament) the king Solomon myth, his rape of Sheba, and the fable of Minelik, the child born of that relation.

1-First, it’s mythology and shouldn’t be brought up when discussing politics to support a position. Unfortunately, Ethiopian debates are loaded with mythology presented as facts.
2-There are diametrically different stories, one fable refers to the woman that Solomon raped (as per the myth) Saba, while another fable calls her Makda.
3-Also, he mentioned another Abyssinian myth regarding the imagined birth of Minelik in central Eritrea–there are several versions of it in the region.

If I wanted to debunk the argument that Eritreans were loyal Ethiopianists, carried the flag and other anecdotes that are peddled by successive Ethiopian politicians, propagandists, and partisan elite (most of them by the way), including Shaleqa Dawit’s conclusions based on medieval and primordial mythologies, they can easily be shredded to pieces. Now, if you are wondering why that is annoying, here’s why:

1. Shaleqa Dawit didn’t care to compare the other perspective, that of the non-unionists, the underdogs, who spread the idea of freedom by challenging the feudal lords. Eritreans did that not to replace a king with another king, but to be the masters of their destiny. That is what the Derg inherited from the Eritrean revolution and started the trajectory which unfortunately the whole region has not channeled towards modernity or even manage to take advantage of the opportunities the Eritrean revolution ignited.

2. Shaleqa Dawit has interfered in Eritrea for too long, and every time he does, he leaves it messier. Since the 1950s, Eritrea went through three successive oppressing regimes. a) Haile Selassie regime, Dawit was an officer then, b) The Derg military Junta, Dawit was a senior member of its ruling party, c) and now he is an ally of the Isaias regime. What have Eritreans done to you Shaleqa Dawit?

3. In his article entitled “The Moment of Truth for Eritrea and Ethiopia” (Linked below) published on June 28, 2018 Shaleqa Dawit invited me to join the Dr. Abiy’s Medemer wagon, however, soon he turned into an avid opposition to Aby Ahmed and his Medemer! What if I had heeded his advice and added myself to the mix only to see him disembark leaving me alone?

There is something Dawit doesn’t know about me: I do not catch a ride that doesn’t take me to my destination, and I do not disembark unless the Weyala mentions my station and asks “Weraj alle?”

4. The most disappointing remark I ever heard from Shaleqa Dawit, (the main reason for my reaction) is, his justification for his new round of alliance with Isaias. Dawit always involves Eritrea in his people’s feud that started with Yekono Amlak centuries ago and is continuing! At one-time he was a “progressive Derg” politician; what would he say to people like me who have suffered from successive Ethiopian governments and now by Dawit’s favorite ally? Is it a coincidence that Dawit is always on the side of our oppressors? I wish he would have mercy on us.

5. In justifying his switching of position, and his alliance with Isaias, Dawit said, “politics is like that, you change allies, it’s okay!” I have a tip for him, courtesy of Herui Talla Bairu, the witty politician who make smart and succinct quips. Someone once remarked, “politics is dirty”. Herui snapped, “Stop that! Politics is neither dirty nor clean, it can only be dirty or clean depending on the hands that handle it.”

Now, for fear of spoiling everything I said so far, I will leave you with Herui’s timeless wisdom.