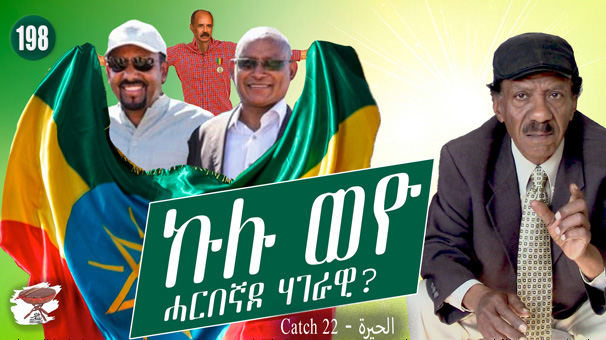 Your always long for Gondar
Will you go to it or it will come to you!
(a traditional wailing in Tigrinya)

When famine was spreading in Tigray due to the war, I suggested that Assab and Massawa ports be accessible for receiving aid for shipment to the suffering regions of Ethiopia. A few who were bitten by the war bug didn’t like my suggestion. But not everything should be considering power politics, there are long- term human concerns that must supersede rivalry and militaristic adventures. Refugees trekking to all direction and Eritreans should have been sympathetic to the victims more than others—after 50 years or so, Eritreans are in refugee camps in Ethiopia and Sudan, including the war-torn regions of Afar and Tigray.

But well to do Eritreans and Ethiopians are flying daily between Addis Ababa and Asmara in fully loaded planes.

When many Eritrean refugees make it to the West, they feel victorious for finding another haven. Some even forget their compatriots who are languishing in the makeshift refugee camps of the region. Though the refugees in the region could be marginally safer than in Eritrea, their lives are still miserable, without any rights or minimum requirements of a human being.  Worse, the ex-refugees in the diaspora make their lives difficult; they are exposed to the wrath of the regional authorities as a revenge whenever the diaspora or the Eritrean regime annoys them.

A month after the signing of the Ethiopian peace deal, some saboteurs have emerged to derail it. And the Ethiopian government has taken measures to suppress vile propaganda and hate speech. But I fear the decision to control the hate mongers, inciters, and fake-news spreaders could be seen as an opportunity to muzzle the free press. Understandably, the click hungry crazy Ethiopian social media groups will not stop, even the tough measures didn’t make them refrain from playing the game of Chinese whisper.

I first learned of the game many years ago when I was in Hong Kong. There are many versions of it but what I first heard was that a group of people sat at a round table in a restaurant. That day, the famous cook was not there, instead his wife cooked the food. When ready, she approached the host and showed him a dish and explained her husband is sick, but she cooked the food. The host passed the information to the person next to him, and he in turn passed the Information to the next, until it reached the last person who heard that the wife has a fight with her husband, and she killed him. Then she cut him in pieces and that is what she cooked for the dinner they are eating. That is the type of breaking news on offer in the Horn of Africa.

Breaking News was popularized by CNN, particularly during the first Gulf war when Peter Arnette reported live from the rooftops of Bagdad. Slowly, everybody started to claim breaking news. But no one needs to be told it’s a breaking news because everything is presented as such when it was broken long before the Youtubers plagiarized the news, spiced it up, and delivered it in a partisan, loaded with fake elements, and spread their propaganda pretending it’s news. Sadly, that says more about the maturity of the listeners than the deliverers’ maturity.

The war fronts are calmer, but Eritreans are still in the dark because the government doesn’t provide information and doesn’t allow others to do so. Now that the war has calmed down, citizens in some parts of the region are a little relaxed. But in other parts, the penful wait to know about the whereabouts of a loved one, and the search for missing soldiers and conscripts is continuing. Still, missing or displaced, and jailed relatives are in abundance.

What is the difference between Patriotism and Nationalism? The concepts are not clear in Tigrinya, most of us use Hagerawi and Harbegna interchangeably. I will use Patriotism for Harbegnanet, and Hagerawinet for Nationalism.

Patriots stand with their country when it does good and advice or oppose it when it errs. That is in contrast with the Ultra-nationalists whose motto is, “good or bad I will stand with my country.” Of course, the poor country does nothing on its own—good or bad are the work of its children, mainly its government that must earn the support or be removed.

When ultra-nationalists claim they support their country, mostly they mean the power of the day, the government, not their people and their country. They fail to make a distinction between the two. In their eyes, the country and authority are inseparable, and they lend it their support even in committing heinous crimes, exposing citizens to great risks in wars, or jailing them without trial. They exile some citizens forever, like the Eritrean refugees in Sudan who have been in exile for three generations. Totalitarian regimes and their supporters are so creative in finding trivial reasons for support an anti-citizen government

The patriots question every public decision by the government and take positions in support of justice, and in support of the citizens never against them. Unlike ultra-0nationalist, they refuse to act or be treated like a herd. So, you Harbegna or Terruf hagerawi? Do you look the other way when injustice is being perpetuated or you fight against it? If you find reasons like “I don’t do politics” you are an ultra-nationalist hiding behind fake patriotism. Why would a sane person espouse fascism in this age? Yes, fascism and racism flourish in an environment of totalitarianism. Is there an injection that clots ultra-nationalism, like Vitamin K does to blood?

How many vitamin injections will be enough for our region to clot all the bloodshed?

There are three ways to pronounce Vitamin in Eritrea: 1) Vitamin, correctly, 2) in the lowlands it is popularly known as Fetamin, 3) in the highlands, it’s Bitamin. However, we pronounce it, vitamins are essential to our health, and in war zones and countries that are run like battlefields, vitamin K is more important because it clots blood. Beside Chloroquine, anti-malaria medicine, Vitamin K is one the most sought-after medicines in the Eritrean struggle era.

If a wounded person, or a bleeding woman during childbirth cannot find Vitamin K, they will likely bleed to death. And I am wondering if the passion to shed blood could be cured by Vitamin K?

Maybe pour barrels and barrels of it in the rivers and drinking water supply reservoirs drinking water! Would it help? Doctors, please don’t rush to say it doesn’t. You haven’t tried it, maybe it’s a cure. The trouble is, where will the money to buy millions of vitamin K barrels come from? See, it’s always a catch 22 (and that is the book I am recommending for those who have missed the hilariously funny classic book of WWII history).

But what if we open our ports for the free flow of aid to Ethiopia? 1) it might start a healing process that would blossom to full peace after, eventually, something happens to the PFDJ, I don’t exactly know how and when. 2) The aid community stated billions of dollars will be spent on reconstruction of the war-torn regions. There will be food, machinery, gas, and many other things that must be imported, and Eritrea could benefit from it through its ports. Besides, Eritrea could reclaim its market share of maritime port services, mainly with Djibouti to whom the PFDJ voluntarily (and stupidly) gave away its share. The whole business that we should have kept is left due to the PFDJ’s reckless politics and village economics. No! That’s what I thought the PFDJ wouldn’t admit. Nothing of what it did improved the Eritrean economy—because everything it did was wrong. A country cannot run on economic policies charted by military minded people and partisan hucks. You have destroyed the loittle economy you inherited and subjected Eritreans to your medieval governance. Get off their back.