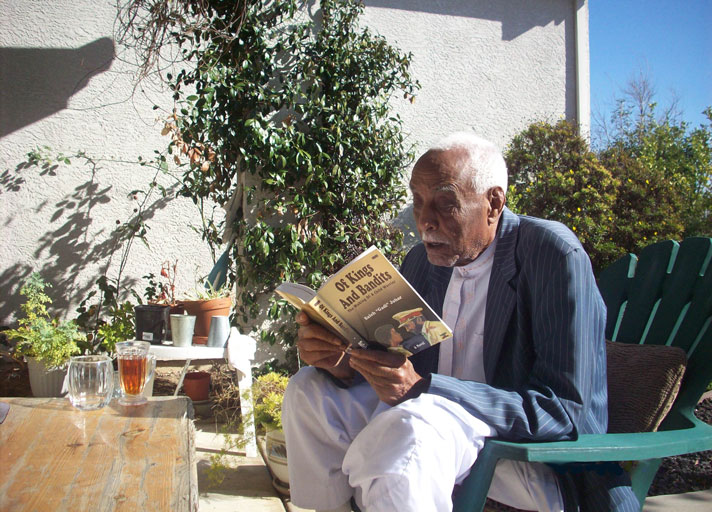 A famous commercial tagline goes, “Never let them see you sweat.” And there was a man who never let them see him sweat. A free-spirited man who faced adversity, jail, and deprivation, but never capitulated. How could he? How could he when he was blessed with a free, stubborn soul that refused to depart except on its own terms! That stubborn soul didn’t die, it just left the body.

I am describing a man for whom the world seemed so small, a man they forced to stay confined within the fence of his house. Maybe, despite the risk, he ventured out and walked around a few blocks near his house, nowhere further. Imagine being denied the freedom to walk in your own streets, in your own city, in your own country. They decided enjoying freedom was a crime. They tried everything, to see him broken. They failed miserably. He never broke down. He never surrendered his free spirit.

On Thursday, that proud gentleman, Abdulrahman Ahmed Younis, was buried in Asmara and the city bid farewell to one of its famous, walking landmarks.

Amm Abdu’s fate is a depiction of the fate of many Eritrean elders. The death of several of his peers was hastened by the inhuman, and monstrous regime lording over Eritrea: Hassen Kekia, Sunabera, and Captain Ahmed Faras are among the many octogenarians who scared the ruling party’s gang before they were scared by Hajji Musa and Sheikh Abrar.

We cannot help but be enraged by the actions of the brigands in Asmara who are dismantling families and communities. Amm Abdu raised enough children to assemble a football team, yet, none of them were by his bedside in his last moments! How could they? Some of them are exiled, or refugees. Even one of his sons has been put in jail since 2012 by the vengeful brigand rulers of Eritrea, when Ali Abdu Younis, the ex-minister of information abandoned the regime. In revenge, the regime immediately jailed his father, his brother, and his sixteen-year old daughter, Ciham. They are still in jail without charges, forget a trial. Also, there is no case to be tried! It is all revenge and cruelty. However, they let Amm Abdu out of prison when his health deteriorated—and put him under house arrest, and denied him an exit visa when he wanted to seek medical attention outside Eritrea. Yes, don’t be surprised: after 26 years of ill managing Eritrea, the regime failed to provide basic medical care.

Admirably, despite all of that, Amm Abdu never lost his sense of humor and his smile. He never bowed down to tyranny but remained a free-spirited, proud man. And we are left with that memory of Amm Abdurahman Ahmed Younis.

Since his early adulthood in Keren, to his final moment in a hospital bed in Asmara, Amm Abdu has lived an adventurous life. He lived and worked in many places in Eritrea, Ethiopia, Saudi Arabia. He traveled all over the world, from Europe to the Soviet Union, to North Africa, and to the USA. He simply adored life and lived a colorful life of class and friendships. His list of friends, people he helped, and many who knew him and fondly remember him, are scattered all over the world. Not surprisingly, hardly a person skips mentioning his unmatched taste and elegance–the way he dressed up, and the way he carried himself, is too obvious to miss. But for me, what strikes me is, despite his long life, he remained a jovial and youthful character.

Among the first Eritreans to receive the luxury of modern education, he was a true embodiment of a cultured Urbanite. “My generation is genuine Asmarino, not fake ones” he used to boast. That is true. And the evidence is what the breed of Asmarino street boys that followed the jovial generation of Amm Abdu are doing to Eritrea–that group of bloodsucking parasites ruling Eritrea is so embarrassingly displaying its ugliness for all to see.

Indeed, Amm Abdu lived a classy Urbanite life that he proudly and ably represented. And that was reflected in the way he dressed, the way he selected even the mundane necessities of a modern life–he would spend hours choosing the right shaving cream, the right balsam, while explaining the qualities of each.

After living in the luxury of the Gulf states for years, where one easily gets the best of everything, and takes them for granted, I never knew there existed three or four bladed razors. He smiled at my ignorance and explained to me the difference.

When I was growing up, as usual, Amm Abdu was bigger than life. No child of my age would think of rubbing shoulders with him because his stature, his presence, and his charisma was so intimidating. But then the ice broke after my marriage. Since he attended our wedding party where he stole the spotlight, I started to become closer to him—and he was someone I can call both, a father and a friend.

When Amm Abdu visited the USA over a decade ago, I spend so much time with him. I fondly remember him insisting that I drive him for an hour to Oakland, to an Italian coffee shop where he said they brewed a perfect coffee… and of course, a perfect cappuccino—he took his Macchiato or double-shot espresso very seriously, never settling for a paper cup, but a ceramic one.

A conversation with Amm Abdu is quite an experience and an educational moment. Thankfully, he patched up several empty parts in my knowledge about history. And he did it in his usual calm, insightful and humorous way, switching between Arabic, Italian, English and Tigrayit to make a point, with amazing details. One just forgot Amm Abdu was an old man because his youthful character was overwhelmingly self-imposing.

My book that he is holding in the picture was taken one cold morning as we basked under the sun, sipping tea in the backyard of my old house. As you can see in the picture, all the time Amm Abdu is at least half-formally dressed; notice the formal jacket over his casual Jalabiya! That is him. He has to appear that way, otherwise, he might not recognize himself.

It was in those days that I expressed my serious nostalgia, “I miss my childhood streets. I miss Eritrea.” He smiled and said, “Paciencia!” Patience I have a lot of, but the nostalgia is becoming too painful. Still, I plead guilty, I wrote many notes about topics that Amm Abdu told me about, though not enough. My worst crime, I don’t have a single audio recording from him, and I will never forgive myself for that.

One day, Amm Abdu seriously berated me and Saleh Younis: “why don’t you compile what you write in a book? Documentation is important!” Saleh Younis was not as touched as I was. Immediately I asked Amm Abdu to convince Saleh to commit himself to help me with editing. Saleh agreed, as always. And I began to write “Of Kings and Bandits”. Now I am proud to say that his push made me write it.

Today, as I express my feelings, in what I thought would be a eulogy, all I can think of was that Amm Abdu defeated his jailers by not breaking down. He took everything with courage, with pride. He never succumbed to despair and resisted the humility the gangs subjected him to. Neither the mean-spirited Isaias nor his minions could break Amm Abdu who lived through whatever they threw at him. He defeated them because he never broke down. He lived proudly and left a proud man. Yet, certainly heartbroken to leave alone as if he was a childless man. His son Hassen and his grandchild Ciham Ali were languishing in jail as he was breathing his last breath. That hurts. And that is what is happening to the young and the old of Eritrea. The corrupted ruling gang in Eritrea has subjected the people to much pain, and they should be made to pay for it all. Still, I am angry. I am still enraged. Nothing will calm me down except the demise of the parasites and their entire ruling edifice.

Have a nice journey Amm Abdu, my dear friend.

A tribute to Amm Abdu by his son Saleh Younis written in 2004: For the Man You Are