Posted on December 19, 2017 by Ismael Ibraheem Al-Mukhtar in Articles 200 Comments 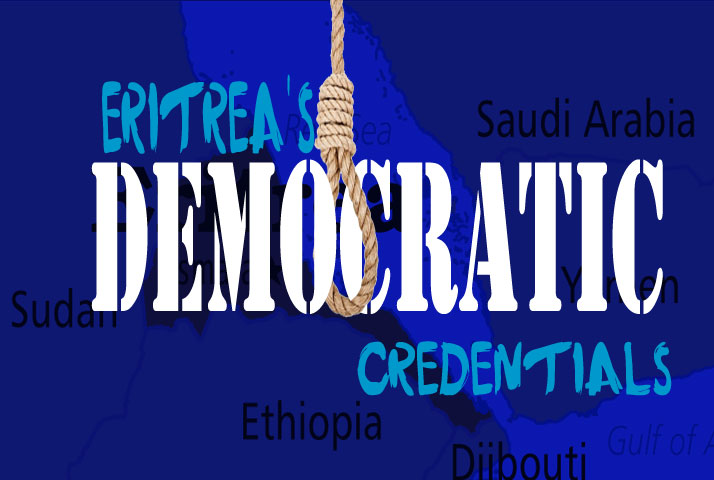 During the United Nations deliberations on the future of Eritrea in the 1950s, one particular claim was made consistently to justify the annexation of Eritrea to Ethiopia. This claim was economical in nature and it maintained that Eritrea was a poor country that can’t sustain itself as an independent nation. This claim was sarcastically refuted by Pakistan’s representative at the UN who stated that if Eritrea was such a poor country as claimed, then why should Ethiopia be burdened with it?!

These days a similar claim is often made when it comes to democracy in Eritrea. A claim is made that Eritrea doesn’t have a democratic experience nor a democratic tradition and thus it isn’t ready for democracy. However, a careful review of Eritrean history and its traditions reveals that even though Eritrea didn’t have a long-lasting democratic experience – in the modern sense – it did have an impressive short-lived experience that was sabotaged by external interferences. Further, Eritrean tribal norms and traditions are relatively more pluralistic and egalitarian in nature. They are aligned more with democratic and participatory norms than the feudal autocratic norms.

Democracy is commonly defined as ‘a form of government by the people for the people’. This simple definition embodies a number of essential values such as freedom, equality, justice and rule of law. Four important institutions play a pivotal role in establishing and upholding a democratic system. These four are: the Legislative, the Executive, the Judiciary and the Media (Press), all supported by a strong civil society. Each of these need to function independently to ensure checks and balances are in place.

Formation of the first Eritrean government:

Following the passing of the UN resolution 390 (V) in December 1950 and after lengthy deliberations, the first Eritrean government was established in 1952. The formation of the Eritrean government was overseen by the UN envoy, Mr. Enzo Matenzo. It came after a painful process in which attempts were made to sabotage, derail and dilute the federal UN resolution. There were relentless pressures from the emperor and his agents on the UN envoy to accept their demands and follow their directives. Matienzo mostly stood his grounds, but he accepted some of their demands that had far-reaching consequences for the newly born Eritrean government. One of these demands was the appointment of the emperor’s viceroy in Eritrea. The formation of the Eritrean government was preceded by the establishment of the first Eritrean Representative Assembly.

Despite many challenges and limitations, parliamentary elections were run relatively well across Eritrea for the first time in Eritrean history. The election produced a parliament made up of 68 members, representing all the major political groups; 32 from the Unionist party, 18 from the Democratic bloc, 15 from the Muslim League for Western Eritrea (separatist party) and 3 from other parties.

As observed by the historian Alemseged Tesfai[i], not all elected members of the assembly had a clear understanding of their parliamentary roles. Among them, there were members who were illiterate and members who were receiving their directives from emperor’s agents. But despite all of these shortcomings, the parliament had some very strong parliamentarians who made the parliament a strong voice of the people. Included among them were Mohammad Omar Akito, Qadi Ali Omar, Abu Daoud, Qadi Mussa Imran and many others. These members of the assembly kept the Executive branch at bay and argued forcefully against the continuous interferences and violations of the UN resolution by Emperor’s viceroy. Beginning from the opening of the parliament where Qadi Ali stood to challenge the viceroy’s speech in parliament to the downfall of the Executive branch under Tedla Bairu, they were relentless in their effort to uphold the constitution, to raise the concerns of the people and to question the measures taken by the government. They stood firmly against government’s attempt to curtail freedom of speech and shutting down of critical newspapers.  When the government kept on ignoring them, they took their case to the court; when the violations of UN resolution continued, they considered taking the case back to the UN. They argued on point of law with courage, consistency and sometimes with across party alliances. The odds facing this first parliament were huge. The emperor and his agents, with so many strings in their hands, were determined on killing this parliament. However, this parliament, despite all the challenges it faced it proved itself to be a thriving and robust parliament. Even though it was later killed by the emperor and his agents, it went down in history leaving behind a shining legacy that demonstrates to the world the spirit of resilience and courage of the elected representatives of the Eritrean people.

A full-fledged judiciary was established with a mix of Eritrean and British judges. The Supreme Court was chair by Justice James Shearer, a British national. As noted by Sheik Ibraheem Al-Mukhtar[ii], who was a member of the Supreme Court, the judiciary at this stage acted independently, free from any interferences.

The courts were able to act autonomously and revoke, on constitutional grounds, a number of decisions made by the government. Two cases are noteworthy. The first was the case of two prominent newspapers, Sawt Eritrea in Arabic and Dehai Eritrea in Tigrinya. These were independent newsletters that published articles critical of the government. They exposed the continued violations of the UN resolution and Eritrean government’s capitulation to the wishes of the emperor. The emperor and the Eritrean government were extremely irritated by the newspaper and accordingly, they closed the newspaper and laid charges against their editors. The editors took their case to the courts and the courts rejected the decision of the government, restored the newspaper and dismissed all the charges against the editors.

The second was the case of the prominent parliamentarian Mohammad Omar Akito. Akito was an exemplary parliamentarian who was a powerful and independent voice in the parliament. Despite all attempts by the government of Asfha Weldemicael to defeat him in the 2nd parliamentary elections, he won his seat for the second term. However, the government of Asfeha with support from its puppet parliamentarians dismissed his elections on bogus grounds. Akito took his case to the Supreme Court of Eritrea, the court rejected the decision of the government and reinstated him as a legitimate representative of his region, Dankalia. There were many similar cases were the judiciary dismissed government decision. Because of their independence, the courts became another target of the emperor and his agents. Through a continuous process of manipulation, the courts were sabotaged from within and its capable judges, including Mr. Shearer, were replaced. This shinning judiciary experience is permanently carved as a momentous landmark in Eritrean history and a cherished proud legal legacy.

One of the first tasks of newly elected parliament was to elect Chair of the Eritrean government. Three names were put forward; Tedla Bairu, Abraha Tesema, and Saleh Hineet. The latter was disqualified because he didn’t meet the age requirement. Tedla received more votes than Abraha and accordingly, he became the Chief Executive of the Eritrean government. The newly elected government took charge of the affairs of the country with somewhat curtailed power and resources. The emperor’s viceroy was running – unofficially – a parallel government with much resources and support from the emperor. Accordingly, this new government was born with major limitations. However, the government had still sufficient room to maneuver and leave a lasting legacy. But, ironically, even though it was democratically elected government, it became resentful of the independent media and had a mostly antagonistic relationship with the parliament. This government only lasted for 3 years, it came to an end after it lost the trust of the parliament. Tedla was replaced by Asfeha through a parliamentary vote. Qadi Ali, the most vocal parliamentarian, objected to his election citing the fact that he was the deputy of the emperor’s viceroy! Qadi Ali was visionary, Asfeha’s ascendancy was the beginning of an end of Eritrea’s short-lived democracy.

A healthy independent media is a backbone of a functional democracy. From early days of the national discourse in Eritrea, many independent newspapers were established in both languages, Arabic and Tigrinya. Prominent among them were Sawt Al-Rabita, Hanti Ertra, Sawt Eritrea and Dhai Ertra. Articles by prominent writers and editors such Yasssin Batouq, Woldeab Weldemariam, Mohamed Saleh Mahmoud, Ilyas Tecklu were featured in these newspapers. During the federation, Sawt Eritrea (Arabic version) and Dehai Ertra (Tigrinya version) emerged as a strong voice of the people. They raised issues affecting ordinary citizens, they published articles critical of the government, they exposed the violations of the UN resolutions and the constitutions and they published petitions submitted by leaders of the independence block. Sawt Eritrea and Dehai Eritrea’s independent voice alarmed the Emperor and his viceroy, they used every means available to kill them. But, with the support of the courts and courageous parliamentarians, they survived many of these attempts. But, finally, the emperor and his agents found their way and the newspaper was closed, its editors were sentenced 3-6 year in jail. Sawt Eritrea and its predecessors are another democratic milestones in the history of Eritrea. They remain as an inspiring legacy of Eritrea’s deeply rooted free speech traditions.

Along with the independent media, Eritrea also saw the emergence of vibrant syndicates and active civil society. The Eritrean labour union, chaired by Woldeab and later by Siraj Abdu; Youth organisations, student groups, and others were instrumental in enhancing and enriching the democratic experience of Eritrea. Many of the leaders and activists of these syndicates were brutally suppressed and silenced. Their history of activism and continuous resistance was another manifestation of Eritrea’s yearning to freedom and active engagement.

This short-lived thriving democratic experience of Eritreans came to an end not because it was incompatible with Eritrean norms, but because of external interferences, namely the autocratic feudal system of the emperor. This historical experience highlights the fact that democratic norms are not alien to Eritrea and Eritreans have adopted them wholeheartedly when the opportunity became available. Eritreans stood firm in defense of their democratic right and made the greatest sacrifice. Eritrean struggle wasn’t just for a piece of land, but more importantly for a land where democratic values of equality, freedom of expression, rule of law and human rights prevails. This short-lived democratic experience needs to be remembered, told to next generations and kept alive in the memory of the nation. It should be a source of pride for all Eritreans and a yardstick for our current and future social and political systems.