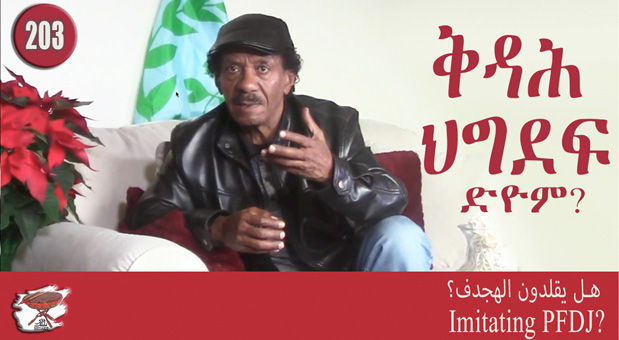 Usually, when PFDJ supporters return appalled by what they witnessed while in a visit to Eritrea, they recount their experiences with bitterness to the extent one would think they have joined the opposition to the regime. But soon they meet like-minded friends and enter the echo chambers where they are overwhelmed by the feel-good sentiments. Each friend pretends to be more patriotic than the rest. Then they revert to watching the PFDJ media and its affiliates; they forget what they witnessed and echo propaganda belaying what they witnessed. It’s time to switch to the PFDJ cult behavior.

Every now and then they attend a public meeting, sometimes known as hzbawi mekhete (peoples’ defense activity) where an authoritative cadre delivers a lengthy briefing about the “Reality on The Ground”. No one can explain the realities better than a PFDJ cadre; the higher the rank the more believable. You wouldn’t expect a non-believable cadre, would you! But the audience is made of loyal listeners. Just listeners. Then follows a question time and the audience reverberates what they listened. Rarely, they ask carefully phrased shy questions not to veer off the PFDJ line. Then it is like when the judge’s gavel slams the desk; the briefing is “Final and Binding”.

Then they meet the comfort circles of close friends and relatives. They release some steam: “what are they saying, what do they want us to do? This is wrong.” A few would nod carefully in agreement; others will wrinkle they forehead in disapproval. But still, even in such a setting, comments are very reserved. The suffering continues and Eritreans ask themselves: ‘why have we failed in challenging the PFDJ injustices?” Indeed, a house divided among itself, doesn’t resist a feeble push, let alone a ruthless tyranny. Specially when the victims are broken, humiliated, and intimidated people!

Let me tell you what I know about the PFDJ meetings

When I lived in Kuwait, there was a man whose job was to act like a maestro of an orchestra. He would make coded gestures to the PFDJ loyalists on how to act during voting in the community center. After every motion, he stands up, looks around and raises his hand. He is the signal. All the loyalists in the orchestra raise their hands. If he looks around and didn’t raise his hand but sits down. They don’t raise their hands.

Once in a meeting I was sitting with the panel and a nice woman who takes care of the kitchen came out to the meeting hall in the middle of a voting session. She exclaimed, “oh! It’s time to raise hands”! She looked around the hall for the maestro; he had raised his hand. “Here!” she said and raised her hands. Had the signal maestro not raised his hand, she wouldn’t have.

Those who are likely to be offended know that; don’t be offended. It’s not a criticism but a diagnosis of what ails the loyalists, and Eritrea.

Eritreans and Their Common Country

The honest would testify that the Eritrean governance is unlike what the nation struggled for. Though the country was liberated with heavy sacrifices, the result is unsatisfactory, and Eritreans couldn’t secure a normal life. That’s why they embarked on a second struggle; this time against injustice caused by native oppressors. And the results achieved thus far are appalling. Many insist on a serious assessment, but Eritreans are also divided on the diagnosis. The solution is for everyone to make their own thorough assessment and then arrive at a common diagnosis. I will make mine:

1. Many times, Eritrea’s miserable social, traditional, and historical burden proves to be lethal, but there is a tendency to ignore that.
2. There are serious self-inflicted injuries due to trivial conflicts that weakens the resistance that follow haphazardly formulated ideologies, impractical… and a hinderance.
3. The resistance is chasing grand designs with no leverage to implement them inside Eritrea—and often they forget the wishes of most people living inside Eritrea.
4. Religious fanaticism, sectarian, fascistic and supremacist plans does not represent the genuine Eritrean stakeholder’s spectrum. The worst is the outrageous assault on the idea of Eritrea, its history, and martyrs. The above is an almost all-encompassing social ailment and no sect, region, or ethnicity is totally free from it.
5. The loose alliance of the resistance opens a gap for infiltrators to the resistance infrastructure and some gain ascendancy. The specializations and goals of the plethora of entities are unclear and fade into each other’s domains damaging attempts to build a robust resistance.
6. The line between political organization and non-political organizations is so blurred it seems non-existent; civic, professional groups, and others structure themselves as political organizations.

Why would a media outlet that clams to inform the public engage in partisan propaganda? Why would inexperienced activists believe they are top notch politicians? Why are the political entities so weak in challenging the activists who are supposed to be allies of the political entities, but instead focus on destroying them? Why are most activists grouped along regional, ethnic, and sectarian lines?

A national resistance cannot be effective and succeed if not led by political entities, not by community leaders and the like. Activists are supposed to support the political entities by lobbying, funding, or promoting them. Thus far, that failure is the major setback and has weakened the resistance instead of contributing towards creating a robust organization.

I believe that the following suggestions and diagnosis will help.

1. Membership in political organizations must be open. There should be proper registration and conditions for accepting a new member and conditions for expelling others who violate the organization’s policies. True, membership is voluntary, but it shouldn’t be left loose, open for infiltration, lack of discipline, and endangering the security of the organizations. The stagnated lax procedures and functioning of the resistance must stop.
2. Many times, I have been in public meetings where in the end, the organizers (or speakers) ask the attendees to vote on a motion concerning their group! Once I questioned such a process and refused to vote; one of the speakers looked surprised! He said, “It’s a public undertaking, you and everyone here is the public!” I objected, “only members of the entity should vote, but invitees like me should not be ambushed.”
3. Social media platforms are not resistance headquarters. People could add your name to a Facebook group, or you may join for different reasons. Surprisingly, sometimes the administrators consider you a member of an entity you didn’t know existed. Membership should be stricter than that.
4. If an organization is not visible in the events happening around Eritreans, slowly it will fade away and disappear. Organizations should influence others, solicit their support to increase their membership. Better, they must achieve some success in diplomacy, lobbying, funding, and other achievements.
5. Organizations that do not have intelligence and security protection, should better close shop instead of perpetually complaining about PFDJ infiltration. They need to make the membership names public, at least the names of their leaders if they want to interact with the public.
6. Media is not a political entity, and a media conglomerate is a media monopoly akin to tyranny. Media outlets should compete and the effective should be supported. However, there is a destructive element to that—loyalty and supporting a media outlet (and political organization) is generally based on primordial affiliations not on ideas or quality of service. And that is not helping the quest for a cohesive resistance.
,
Reorganizing and Reorientation! Then What?

Papers and roadmaps are good, but they are useless unless they are followed by action. Politics change, and in the last decade or so, it has been changing fast all over the world, including in Eritrea’s proximity. How many opportunities have the resistance missed to make itself relevant, or make its presence noticeable? How relevant did the resistance make itself in the recent crisis in the Horn of Africa? Not much.

Issuing press statements is good, but when every activist is issuing one, they lose their value. And statements by political organizations should be more effective than that of an amateur activist. And it must be coordinated. Why would an entity issue a separated statement when it is a member in a resistance umbrella! Such acts do not encourage new members to join; it can’t even keep old ones.

Serious political organizations should not be preoccupied with high school type of activism that do not make a dent on the oppressor’s strength. Egos of overly ambitious individuals should not be inflated without a test and a track record, especially the ego of activists who think of themselves as the next replacement of the Eritrean regime. That would be fine if their character and work supports their dream, but what we see is far from that.

Success can only come about through a combined, streamlined, disciplined organization—all members knowing their roles and limiting their ambitions to the possible because activism is not a license to leadership. If one is a bystander with that kind of ambition, the proper way is to first join an established political party or form one. And the Diaspora should always be aware that its number is just a fraction of the Eritrean population. Importantly, those living in Eritrea are not dummies waiting for a leader to be shipped from abroad—like Shelebi who parachuted to Bagdad to replace Saddam but couldn’t secure a parliamentary vote. Connections and ties with people inside Eritrea should be strengthened (where there some) and established (where there are none). And never forget the major stakeholders live inside Eritrea and its surroundings, and they are well placed to affect change. Also, Eritrea is the only home they have, no other choices like the Diaspora.

The resistance can only succeed if it sheds off the loads of issues that can only be addressed by an elected parliament. Issue like group or individual rights, property rights, the rights to accessible courts and proper trials is a constitutional issue that can be postponed until Eritreans replace the rotten system and reach transitional phase towards constitutionalism.

Finally, look around you, no single issue can be resolved separately unless it’s packaged together with all other Eritrean issues. And that doesn’t mean lip-service solutions with carefully uttered words, but through a genuine pursuit of justice. It’s the foundation of everything from pluralistic democracy to human rights, to property rights, to peace, and “all the good things in life.” Only a just system solves the grievances and realizes the aspirations of Eritreans; only that kind of system can usher peace and stability.