Finale of an Eritrean Struggle

Posted on January 22, 2023 by Awate Team in Negarit, Videos 0 Comments 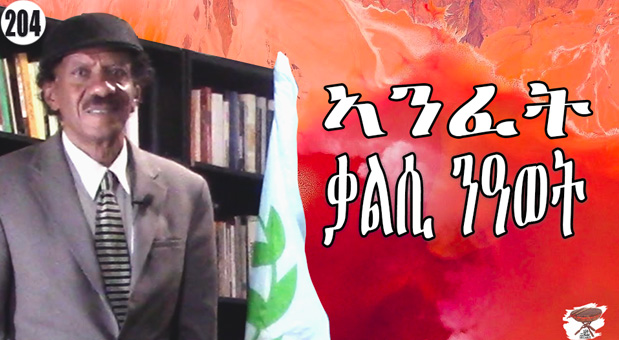 In the previous two phases, we talked about things that must be done at the individual level.  An individual must decide whether they want to support the Eritrean regime, oppose it, or be indifferent to it.

If they decide to resist its injustices at the individual level, they decide their degree of resistance. Is it passive or assertive resistance? Is it secretly, or publicly?

Equally importantly, related to the next phase, do you oppose the government for all the right reasons? Is it because you don’t think it’s cruel enough? Do you have a vision of what its replacement should look like? And what is your motivation for resisting until it’s changed it: is it because you want to say “my conscience is clear” or do you want to be a change agent?

If you decide to be a change agent, you need to remember a few things:

If that’s not for you, or if you are not willing to commit yourself, then you have no power other than the power to complain.

Whether you call it a Front, a Union, a Party, or a Social Movement, we are talking about the same thing: it’s when people realize they can’t bring change on their own, or when others oppose their lone efforts to bring change, and they agree to work with others towards the same goal.

What we decide to call it is a discussion of form and structure.  For example, the F in PFDJ stands for a Front and how it has decided to structure itself is by putting all the decision-making process in the hands of a handful of people (they are the front) and relying on the base for resources and mobilization.

The Resistance has also tried its own: they were Alliance, Coalition, Bloc, Forum, Assembly, Bayto, Mejlis, etc.  The structure the Resistance aimed for was a “democratic” one, but then there are many forms of democracy: based on individual vote, consensus, slates, etc.

Yes, this also happens within PFDJ.  The exiled or the disappeared or those in prison or “frozen” are people including senior PFDJ officials who disagreed with the Chief or his lieutenants who had the power to do all of that.

There is a moment in all movements when they realize they are not identical and react to incidents differently.  Joining a movement has demands on your time and your money, you must believe that it’s necessary.

Critics of the Resistance

Imagine you and many others are in bus and being taken to a prison. Then some ingenious prisoner plans to get out of the bus and set you free. If they are sure you will succeed, the prisoners might support you, unless they always saw you making noise, and crying, with no power to free you. Worse, you are caught in the action. Now they will hate you for disturbing their peace. More than they will hate the person who made the decision to imprison you or the bus driver taking you to prison, or the armed guards. See what you have done! They guards were going to let you look out the window into the darkness but thanks to your whining they have order you to put your head between your legs and they turn the lights off; you are not allowed to even see the darkness through the windows.

Such a people have a fatalistic view of Eritrea.  What will happen will happen you have no power to stop it, just stop reminding us constantly of it because we just want to pretend it’s not there.

If you are one such a person, this phase 3 is definitely not for you.  And the best you can do is to change your mind (after all it’s been 30 years as you passively waited for change to come spontaneously with no cause); but if you can’t, please don’t join the resistance and create chaos.  The PFDJ is doing that on its own; it doesn’t need your help.

Back to Collective Action

Do you believe that the change agents must reflect the diversity of Eritrea or are you saying let’s get it started with people who look, and talk like me? Regardless of which group you belong to; I am talking to you.

During the Ethiopia Tigray war had you taken a side with Tigray or Ethiopia? Do you see those who took a different position from you as your enemies or people who were caught in the confusion of the time but still are opposed to the Eritrean regime and are your allies?

When is the last time that the resistance took a collective action (demonstration, letter-writing campaigns, lobbying) to express its opposition to the Eritrean regime? You shouldn’t even describe yourself as a member of the resistance to the regime but an ally of all its victims.

When is the last time the resistance won friends for its cause?

So, the solution is what you already know: Organize, Organize, Organize. Organize on whatever comfort level you have.  But then, since you are facing a potent adversary, you must do the next thing and scale up.  Good intentions are not enough: the magnitude of the effort must meet the task.

The resistance is not starting from scratch.  There are established organizations.  Small, yes. Fragmented, yes. But it’s enough to start the fire in the belly.  All the existing organizations (all those whose platform, charter, manifesto) is about bringing change to Eritrea must meet.

They must meet with only one agenda: how do we create a Supra structure that can create, build, sustain our ability to work together towards our common goal?  This cannot be just two organizations’ representatives meeting for coffee and issuing a joint declaration.  But an actual infrastructure with shared leadership.

That’s the only way the resistance will have a chance to put an end to the misery the people are going through.  So, we can just, separately, cry about it or collectively confront it.

And my call is for all the organized entities, (whether they have started it or are thinking of starting to, or are halfway through it, that) to adopt that as a main timely goal: an all-inclusive conference to create the All-Eritrean Alliance.