Ahl Al-Kahaf: The Sleepers of Ephesus 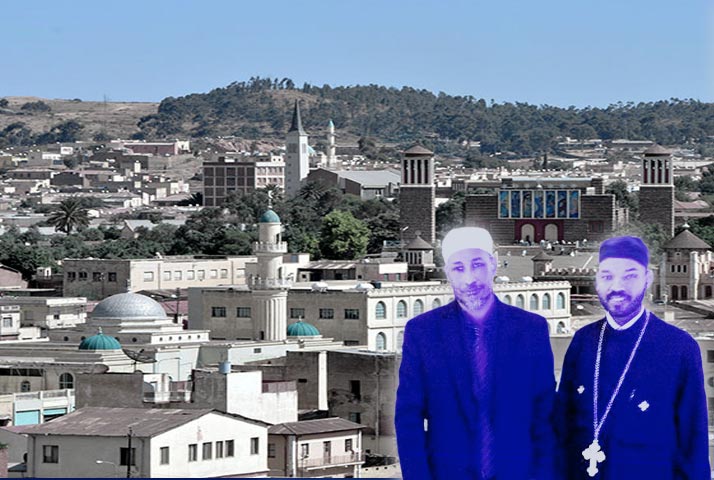 Let me begin by wishing success and fruitful discussions for the organizers and attendants of the Sheffield Meeting, planed for tomorrow, Saturday, July 22, at 2pm.

The two honorable men in the picture are Shiekh Mohammed Juma Abu Rashid, and Abba Shenoda Haile. The “Eritrean Justice Camp” knows both men who are visible in demonstrations and gatherings to highlight the predicament of Eritreans under the yoke of the PFDJ tyranny.

This week the two men became a topic of discussion after Eritreans in Sheffield, England, called for a public meeting to which they invited notable community leaders. I read most of the comments (mostly by Muslims) while holding my nose.

The average Muslim is aware of the Koranic story of Ahl AlKahaF, Surarh 18, Verse 19-26 (The People of The Cave) which Christians known as the story of “The Seven Sleepers of Ephesus”. And I wondered if people who just came out of a cave didn’t post the comments. This edition of Negarit is my spontaneous reaction to the comments I read in frustration. And I believe there is a source for all of that noise.

The Assault Is Not New

A few years ago, when I warned that the Eritrean legacy is under attack, and defended the case of Hamid Idris Awate, many didn’t see the reason for my reaction. Naturally, tampering with the pillars of a building leads to the crumbling of the entire edifice; once Awate is discredited, it is natural the entire Ghedli legacy is put in question. Thereafter, the illegitimate becomes legitimate and there remains no sanctity for anything Eritrean: legacy, sacrifices, nationhood. Then, is it a surprise that a few vagabonds have been desecrating our martyrs?

The demoralizing is still going on unhindered and everything we hold dear is being besmirched. Maybe a few critics are doing it with good intentions, to avoid a repeat of past failures, but for most of them, the assault aims at erasing our history and crippling our dreams for the future. The assault on the Eritrean legacy is relentless, vile and extremely obnoxious.

If not for the few reasonable and patriotic (even faithful) exceptions, the nasty comments about the picture of Sheikh Mohammed and Abba Shenoda are a deliberate continuation of the destructive campaign with a goal to destroy anything Eritrean. And that can only come from those who do not understand the Eritrean resolve of honoring their legacy. They do not appreciate the tenacity with which Eritreans will fight back, regardless of any factors, internal or external. The fact that Isaias and his clique tarnished the fruit of our struggle, the fact that the PFDJ regime usurped the sovereignty of Eritreans, the fact that a few noisy revisionist elements found space to attack our history and our unity, will change nothing. It’s just a bumpy road that we must break through.

This Needs to Be Said

What follows below might annoy some people. I really do not give their annoyance any weight, their ego is not more important than the Eritrean nation. Who in his right mind would object to a Christian and a Muslim notable sharing a seat in a national public meeting except those who dwell in caves? Some were even more callous: they accused Sheikh Mohammed of apostasy for taking a picture with a priest donning a Cross! What is odd in a priest who dons a cross? And strangely enough, they are all worked up when their Christian nemesis badmouth Muslims and threaten them with genocide! What is the difference between the two extremist camps who think they represent the noble Eritrean Christians and Muslims? Is the Eritrean womb barren to settle for such fanatics for leaders? Not at all. The Eritrean womb is still fertile. But the nation is going through acute anxiety caused by the ruling clique. The nation is going through tribulations that it will surely overcome.  Only the fools doubt that.

But such has become of the state of our nation. The voices of the fringe of the Eritrean Diaspora are too loud to ignore though it is too hollow to take seriously.  Nevertheless, it is an annoyance: as the Tigrinya saying goes, it’s lice inside the pants forcing a brave person to undress. Such outright assault on the cohesion of the Eritrean society, despite the many attempts by successive rulers to break it, was unfruitful. And they better learn from that.

During the era of the liberation struggle–which is maligned by those who feel empowered by the ill governance of the country—only the chaff of the combatants conspired for their narrow interests. The rest of the loyal patriots stayed focused on the betterment of the Eritrean society. Sadly, this is where we have reached: today vagabonds think they can successfully divide the people, along all sorts of cleavages—if they don’t find enough, they create new cleavages.

The sectarian vagabonds agitate for confrontation, knowing any fire that erupts will not burn them; they will stay safe in their adopted countries, while they plan for the beleaguered Eritreans to fuel the fires. And if, God forbid, they succeed, such fires are not controllable and would engulf all the region—beyond the confines of our immediate region, beyond Sudan, Ethiopia, and Eritrea. I wish they wise up a little and stop calling for mayhem and turmoil on Eritrea or any other country.

First, Clean Your Own Yards

Once a relative told me, “wise Christians and Muslim leaders should first clean their own yards before they can embark on repairing the dented national unity.” Naturally, given the Eritrean context, I objected to his view though I found it thought provoking to ignore. He believes that, “every sect knows its dirt better than the other… but people should not clean their yard only to throw their dirt in the neighbors’ house over the wall.”

Throwing your dirt to the neighbor’s house is a source of so many problems and almost everyone knows where it leads. Even in the West, bad blood often develops between neighbors when one of them throws his lawn dirt on the neighbors’ front yard.

In short, Muslims and Christians alike have so much dirt in their own societies to blame each other. But who is doing the blaming? Of course, the rascals, the vagabonds, the despised lots among us, not those whose intentions are clean and want to live and let live in a stable and prosperous Eritrea. So much was invested in that goal, that dream which was within reach if not for the deranged rulers of Eritrea who cannot live except as prison wardens. They are the root cause of our predicament. If not for their failure to create conducive environment for citizens to sort out their problems, the spoilers wouldn’t have dared to challenge Eritreans on their unity and cohesion.

The state of the beleaguered Muslims is no secret—it is chaotic and keeps splintering along tribal and clannish groupings. No one admits it, but most do it in an obvious way.

On the faith aspect, the problem of literalists must be addressed. It has become all too common to inject inter-Muslim dialogue with heavy religious quotes—not only from the Kuraan, which would be reasonable, but traditional and historical quotes, poetry from pre-Islamic times, and Haddith quotes attributed to the prophet. They throw a barrage of quotes and expect you to either accept their reasoning, or they will scoff you…or worse, they will consider you an apostate. Some of these extremists think they are divine simply because they quote divine scripture, and their weapon is “Tekfir” (branding someone an apostate), and in the hands of extremists, that is a serious matter.

What does Sheikh mean?

It is important to note that Islam doesn’t have a clergy, or an ecclesiastical hierarchy, a Sheikh simply means an elder. And if a person is considered righteous, then automatically he becomes a community reference. Otherwise, generally Muslims do not have intercessors equivalent to the Christian practice of confessions, or an equivalent of “Abat Nefsi” except for some Sufis who seek intercessions from “saints”(Awliy’a). However, the Muslim demography is plagued by self-imposed individuals, institutions and countries, that act the role of Abat Nefsi for Muslims. But they are not welcome in my life and the lives of people who share my views. I respect those who deserve to be respected, regardless of their faith or race, I was raised  to be loyal to age, and to humble myself in front of the learned, the selfless, and the  righteous.

If you can see, I am already embarking on clearing my own house together with people who agree with me. As for my Christian compatriots, believe me, you cannot help in this endeavor because you have enough in your hands. I would appreciate it if you also start cleaning your house. And as my relative said, if we do that, surely we will prepare a better ground to address our issues calmly and responsibly. We should embark on a serious challenge against those who consider the Eritrean citizens pawns in their political games.

A Muslim growing up in Eritrea, I never heard of any of the terms that are now too common: Rewaafid, Khwaarij, etc. And no one can claim the Muslims of our region are less Muslims than others. In fact, it is sad to see some people resuscitating political conflicts that happened many centuries ago, in far lands, and forcing them on our society.

Finally, those who think they can win an argument by simply parroting a myriad of religious sounding quotes are trespassing on the thinking faculty of others. Those who think they are divine because they can quote divine scripture should know they have no divinity. They are simple mortals like anyone else.