The USA May Impose Visa Restriction on Eritrea 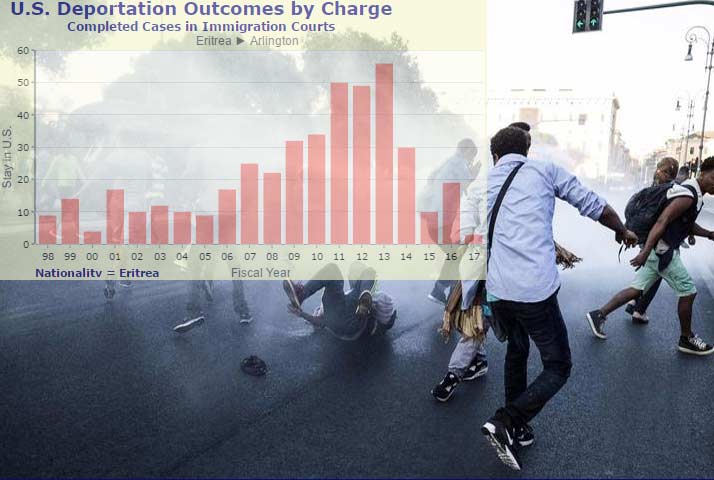 Since 1967, Eritreans have been escaping their country and ending up in different countries of the West where most are now naturalized citizens. In the Middle East however, where the laws do not allow naturalization, many have lived for decades and died as aliens. Still, many others were deported and handed over to the regimes they escaped from to be imprisoned, executed or disappear with no traces.

In 1967, entire villages were uprooted due to the scorched earth policies pursued by Emperor Haile Selassie of Ethiopia who was deposed by a socialist military junta in 1974. But the new regime was no better than the emperor and heralded an all-out war to defeat the Eritrean revolution for self-determination. The seventeen-years of bloody conflict that followed caused hundreds of thousands more to escape their country. By the time, the escape routes led to new destinations beyond the immediate neighborhood. However, hundreds of thousands of Eritrean refugees still live in Eastern Sudan in makeshift camps teeming with second and third generation refugees.

In 1984, many sides, including intelligence departments, collaborated with the Sudanese regime of Jaafer Numeiri in helping members of some Eritrean factions to be dispersed in the West, including Australia. The bulk of them were transported together with the Ethiopian Jews known as Bete-Israel or Falasha out of Sudan in a covert project known as operation Moses.

In 1991 all Eritrean territories were liberated, and in 1993 the country formally became independent and joined the United Nations. Thereafter, a struggle era organization changed its name to the Peoples’ Front for Democracy and Justice (PFDJ) and installed itself as the sole governing body, criminalized competing political organizations and formed a transitional government—immediately it embarked on militarizing the nation and was engaging in conflicts with Djibouti, Sudan, an Yemen.

In 1995 the government issued a Proclamation on National Service No. 82/1995 of 1995. By 1998, it became apparent that the so-called national service was indefinite when it clashed with Ethiopia over a border village. The bloody war lasted for two years and around 100,000 lives were lost from both sides. In addition, tens of thousands of people were uprooted and displaced.

The endless wars and the indefinite military service added to the flow of refugees and since the war stopped in 2000, Ethiopia has established around ten camps where it houses tens of thousands of Eritrean refugees of all ages. For most of the youth, the Ethiopian and Eritrean refugee camps became transit stations in their escape routes to better places in the West.

According to international refugee agencies and human rights organization, between 2014 and 2016 about 100,000 Eritreans have entered Italy. The USA and Canada have also settled many Eritreans from the Ethiopian refugee camps.

Eritrea does not accept its citizens that host countries want to deport to their country. The few who were forcefully deported to Eritrea by Sudanese security officers ended up in jails and their whereabouts is unknown. A few who were deported by Egypt and other countries also faced the same fate.

In the past, the USA has failed to convince the Eritrea regime to accept its citizens whom it wanted to deport to their country. The recent refusal by the Eritrean authorities is the reason for the visa sanctions that the Department of Homeland Security wants to be imposed against Eritrea.  Such visa sanctions usually restricts nationals and government officials of those countries from securing entry visas to the USA

In a statement it issued on Wednesday, August 23, the Department of Homeland Security has asked the State Department to sanction Eritrea, Cambodia, Sierra Leone, and Guinea for refusing to accept individuals facing deportation from the USA. If forcefully returned, Eritreans face the risk of imprisonment and torture.

It remains unclear whether the sanctions would be imposed or how many Eritreans are waiting to be deported. According to reports, the State Department declined to comment whether it was concerned that Eritrean deportees would be jailed or tortured upon return.