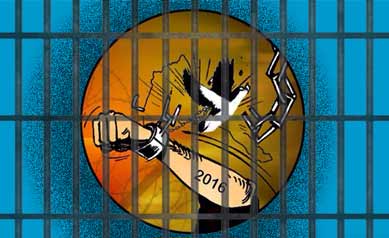 On April 14, 2016, Eritreans around the world will commemorate their imprisoned compatriots. Four years ago, a group of Eritrean activists declared April 14 “Prisoners Day”, and they have been commemorating it since then.

According to human rights organizations,there are thousands of Eritrean prisoners of conscience languishing in hundreds of prisons in Eritrea. Some have been held for more than two decades without charge or a day in court.

Prisoners who were lucky to either escape from prison or somehow be released state they never knew the reason for their arrest because they were not informed of what they were accused of.

When prisoners die in jail, the regime orders the relatives of the deceased to collect the body; other times, prisoners are just buried in secret.

According to Mohammed Juma Abu Rashid, an activist who resides in the UK, “a prisoner, Sheikh Mohammed Mranet, was jailed less than two-months after the independence of Eritrea in 1991.”

Mohammed Mranet is a veteran of the struggle era and was in charge of a clandestine cell; he worked closely with the Eritrean Liberation Front.

Mranet was imprisoned with tens of teachers from Keren in the early nineties. When the Isaias regime imprisoned him, Mranet was a judge.

Eritrean prisoners of conscience include teachers, religious leaders, veterans of the struggle era, professionals, artists, traders, sheikhs and priests, as well as veteran combatants and leaders of the EPLF, the organization that defeated the Ethiopian occupying forces and ushered the independence of Eritrea. Among them are ministers and army commanders and other senior members of the ruling party and the government who were Isaias Afwerki’s close associates.

Many members of the group of activists running the activities related to the April 14 commemoration are the children of prisoners. Some of them were between one-year and four-years old when their parents were imprisoned or disappeared in the early nineties.

This year’s commemoration will include a major seminar in London.

Eritreans residing in other cities, including Melbourne, Australia, have already started a campaign to spread awareness about the plight of Eritrean prisoners of conscience.