The Conditions of Eritrean Refugees and POWs In Djibouti 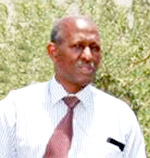 Djiboutian authorities declared that they have dealt with more than 500 Eritreans who were members of the Eritrean military. Out of those, 235 have already been settled in third countries such as Canada, USA and Europe; Djibouti is working on the files of the remaining persons to have them settled in third countries. Djibouti also calls on the international community to pressure Eritrea to disclose the whereabouts of Djiboutian detainees, POWs of the border battle between Eritrea and Djibouti in April 2008.

According to Tewekel, there are 265 POWs and detainees who escaped from the military service in Eritrea and are now housed in the Police Academy detention center. According to him, the Eritreans are held in three centers.

The first group is composed of 19 Eritrean POWs captured during the border conflict with Eritrea. One of them is suffering from mental sickness. The POWs have asked for a special room for him; Colonel Abdellah promised to arrange that.

The living conditions in the camps is difficult in temperature that reaches 40 centigrade.

In his visit to the detention centers, Tewekel accompanied the chief of the Djiboutian police Colonel Abdellah; the detainees said he was the first high ranking official visiting them to see their conditions and listen to their complaints.

The POWs are concerned about their fate and they do not know for how long they will remain in detention or where they will go. They complained from lack of air conditioning, medication, and doctor’s visits. They also complained for not being allowed to sleep in the open to avoid the heat inside the rooms.

Colonel Abdellah gave them the choice to return to Eritrea through the International Red Cross (IRC) if they so wished or wait to be settled in third countries. He said that Djibouti was talking to concerned parties such as the IRC which is responsible for the POWs. He also informed them that he will see to it that the rooms are air-conditioned and they are allowed to sleep in the open. As for medication, he said that it is the responsibility of the IRC.

The third group is in better condition but they wanted to know whether they were considered refugees or prisoners and why they are not housed together with the refugees because some of them are separated from their wives.

Colonel Abdella said they were refugees and soldiers but not POWs, and that they were separated from the rest of the refugees for extraordinary reasons due to the conflict with Eritrea, “but we deal with you as brethren.” Tewekel stated that in Eritrea, the entire population is militarized and the only civilian is Isaias Afwerki.

Colonel Abdellah promised to transfer the five civilians to the civilian camp.

According to Colonel Abdellah, Djibouti pays the accommodation expenses for the refugees and the detained.

Tewekel appeals to the Eritrean Diaspora to support the Eritreans detainees and refugees in Djibouti.