Six more class action lawsuits have been filed against Nevsun Resources after Brent Cook, the editor of Exploration Insights, in an exclusive interview to The Gold Report, characterized Nevsun’s multiple  revised reserve estimates of Bisha gold mine in Eritrea, as shoddy work [1].

The lawsuits allege that the Canadian mining firm, Nevsun, knew but failed to disclose that its efforts at the Bisha mine were producing a material amount of waste rock instead of gold ore. The lawsuit further alleges that Nevsun failed to timely disclose that the gold ore extracted from the Bisha Mine was materially less than the amount estimated by its models.

So far, thirteen law firms have filed class action lawsuits against Nevsun. At the center of the issue are the controversial comments made by Mr. Scott Trebilcock, Nevsun’s Vice President of Business Development & Investor Relations, in a phone interview on   March 8, 2011 to Mineweb[2]. He said, “Our objective is to double reserves,” a few weeks after Nevsun had revised up the estimate to be 28 million tones at 1.78 gram/tons gold, 38.9 gram/tons silver, 1.6 percent copper and 3.15 percent zinc.

Mr. Trebilcock also stated that “most of the extra reserves will come from inferred resources sitting below the existing open-pit design in the primary zone of the deposit. All told, inferred resources at Bisha weigh in at 10.6 million tones at 0.67 gram/tons gold, 47.78 gram/tons silver, 0.91 percent copper and 5.67 percent zinc.” Trebilcock further added, “We’re talking pretty substantial,”

[Editor note: Here is a perspective to the reader on the ratio of what 1.78 gram/ton means. It compares to the ratio of the weight of wedding band (3 grams) to the weight of an average car (4000 pounds). One metric ton is equal to 2200 pounds. In other words, to extract 3 grams of gold, 4000 pounds of waste rock and soil needs to be processed.]

Following his statement, Nevsun stock went up by 11% in a period of a week. However, ten months later, shareholders were shocked to learn that the reserve estimates were cut by half and the stock price dropped by 40% in a single day.

Mr. Trebilcock, who is based in Eritrea and whose total annual compensation (calculated by Bloomberg[4]) for 2011 was US $499,345, also made a passing comment on Nevsun’s plan to diversify political risk by acquiring copper projects elsewhere from the cash it generated from Bisha.

By the end of the summer of 2011, sources informed Gedab News that word was out in Asmara that Nevsun was manipulating production schedules and that its earlier upwardly revised estimate was unwarranted. Nevsun 2011 annual report indicates that gold production tapered by the end of fourth quarter of 2011 even though the downward revised estimate was announced to investors two months later on Feb 22, 2012. 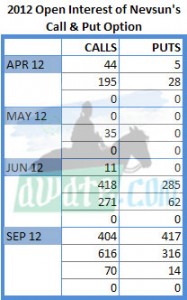 Meanwhile, more facts have come to view regarding Nevsun’s announcement to buy back its common shares. Except for the slight change in the Nevsun financial ratio because of reduction of numbers of shares outstanding, the repurchase announcement did little to move the stock. Perhaps one reason that the stock has not tumbled further has to do with the fact that 78% of the early shareholders are institutional investors who purchased the stock when it was under a dollar and have taken enough profit and do not need to exit completely. Individual investors seem to have taken the brunt of the losses.

The Toronto Stock Exchange has approved the plan by Nevsun to purchase back up to 2% of its own shares in the open market starting on March 26, 2012 and continuing until September 26, 2012. The purchased shares will be cancelled by the company and will not be kept as treasury stock and thus will reduce share capital in the balanced sheet, a sign management does not foresee a favorable market condition to re-issue them.

The key word in the repurchase announcement is ‘up to’ meaning that it is just a plan to purchase back any number of shares up to 2%, a move that  was intended to restore investor’s confidence as was previously reported onby Gedab News, March 19, 2012. Companies often announce repurchases and then fail to complete them [4]. It remains to be seen if Nevsun will disclose its repurchase activities in its third quarter report.

Also at issue is the lack of information on whether Nevsun officers and directories have financially benefited from first revising up of the reserve estimate in early in 2011 and then revising it down in February 2012. Publicly traded companies based in the US must file Form 3, 4, and 5 with the SEC to disclose when their officers purchase, sell, or exercise stock options. But unlike the SEC of USA, Canada does not have a strong regulator at a  federal level. Its securities market is managed by agencies at Canada’s 13 provinces providing a far less regulatory restriction than the USA and resulting in the disproportional number of Canadian start-up companies operating in developing countries. Hence, this information is hard to come by and Nevsun has not volunteered to disclose such information to its shareholders.

Analysts who follow Nevsun have revised their earnings estimate for Q2 and Q3 2012 by half and kept Q4 2012 estimate unchanged. Nevsun options also echoed similar outlook as evidenced by the number of the recent open interest positions for the expiration cycle of April, June, and September. For the strike price of US $5, the call to put ratios are 7.0, 1.45 and 1.9 for the months of April, June, and Sept, respectively, with no put open interest for May.

The buyer of the an option has the right, but not the obligation, to buy a block ( in this case a 100) of the underlying stock while the seller of an option, in return for a fee, is obligated to sell the  underlying stock should the buyer so decide. The buyer of a call option purchases it in the hope that the price of the stock will rise in the future while the buyer of a put option hopes the price will fall. The seller of an option assumes an opposite position that of an option buyer. The contract specifies the period and strike prices at which the buyer can exercise the option

The number of open interests increased from 130 contracts on Feb 20 to 616 contracts on April6, indicating that they were opened after the stock dropped 40% in one day. The total number of open interests in terms of equity shares are (206,400 from calls and 112,700 from puts) is less than the average daily traded shares but offers a glimpse into the stock’s future. These leveraged positions suggest a positive outlook for Nevsun at these expiration dates, which coincide with quarterly earnings reports, are optimistic of the stock price short-term performance. However, in addition to the large bid ask spread, these options are very expensive to buy because of the high historical volatility of the underlying security as well as the high implied volatility of the options that is obviously driven by the political risk exposure of Nevsun. The historical volatility is five times that of S&P, indicating the political risk premium being discounted in the option prices. The high implied volatility for the front months options reflects the anticipated engineering assessment of Bisha reserve by a third party sometime in second quarter. Those who are buying these options must know something about the assessments that the general shareholders or the public does not know. The future increase in stock must be large enough to compensate the delay of holding these options for a long time. Even though Nevsun trades at NYSE, its officers and directors do not need to file inside trading activities with the SEC.