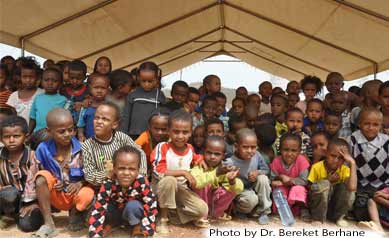 News coming out of Eritrea indicates that refugees are escaping from the country at the rate of about 7,000 people every month.

Since the beginning of September, the situation in Eritrea has become tense and that the population is nervous and living in anxiety and panic.

In the first half of October 2014 alone, the United Nations Office for the Coordination of Humanitarian affairs (OCHA) reported that 1,700 refugees have been registered in Ethiopia compared to 1836 refugees in the whole of September.

The report indicated, “At present, more than 200 Eritreans cross the Ethiopian border each day.” It added, “The number of daily refugee arrivals spiked since the first week of September” and the sudden spike in arrivals is causing, “congestion at the reception center.”

Though minors have been leaving Eritrea for a few years, in the last few months the number of unaccompanied minors reaching Sudan and Ethiopia has increased drastically.

This situation has given life to the human trafficking trade that had relatively slowed down for a year or so; now, they are charging escapees as high as $3000 per person to help them cross the borders to either Sudan or Ethiopia.

The transaction of human trafficking charges and ransom money is widely conducted inside Eritrea where, allegedly, many individuals affiliated to the regime are involved.

Bleak future, lack of freedoms, unavailability of work, and endless servitude of the youth in government projects, are the main reasons why Eritreans leave their country.

The recent crisis that is brewing within the financial arm of the ruling party that monopolizes the economy has also greatly contributed to the spike of flight of Eritreans from their country. The financial crisis has resulted in an acute shortage of fuel (oil) supply.

Refugees reaching Sudan are mostly not accounted for, while in Ethiopia they are meticulously registered. Thousands of new escapees are being added to the hundreds of thousands of refugees who have been stranded in squalid camps in Eastern Sudan.