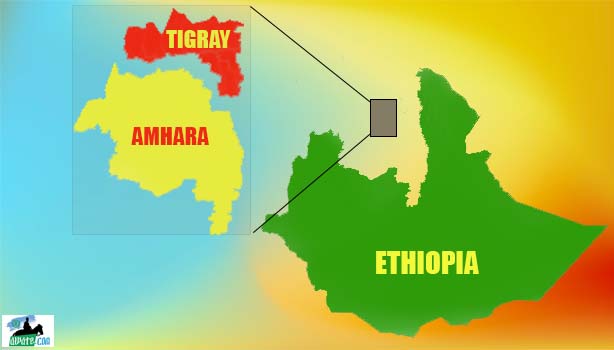 Gedab news learned that Eritrean refugees in  May-Aini and Adi-Harish refugee camps in Tigray, have not faced major displacement. The refugees are still in the  camps where UNHCR is expected to reestablish its presence very soon.

Workers of the Refugee agency in the camps, mostly Tigrayans,  fled the camps when the war between the Ethiopian federal forces and regional Tigrayan forces started.

There are many underage refugees in the camps, particularly in May-Ayni.

Caught in the crossfire, so far, the refugees have sustained minor casualties. Several persons were wounded or killed in the crossfire during the earlier weeks of the war.

According to the resident of the camps, Tigrayan and Amhara militia forces are around the camps where they clash intermittently. In other areas, the fighting is more intense, particularly around May-Tsemri. No reliable news is available from Shimelba and Hntsats, bigger camps located in a major fighting area.

Elsewhere, the real war on the ground seems to be relegated to secondary level as the propaganda war became more intense and significant. Moreover, Diaspora Ethiopians continue to spread hate speeches to agitate for more bloodshed through social media platforms.

In the absence of formal verifiable news from the warring sides, the anxiety among the people of the Horn of Africa region has reached a serious level. An observer said, “the social media war among partisan diaspora Ethiopians has exasperated the situation as they incite for more violence and hate.” The official media has not fared any better broadcasting little information or unverifiable news.

The Ethiopian federal government has blocked all communications within Tigray. However, some refugees were able to make calls by climbing on high hills for better reception. After a month of total blackout, it’s not clear whether the government has allowed a limited communication in the area or the signals are an overflow from adjacent areas. The telecommunication services in the Amhara region that borders Tigray region is still unhampered.