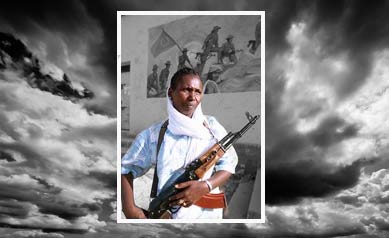 Since last Spring, when the army started to instruct conscripts returning to their units to stay at home until further notice, the Eritrean government has been facing difficulties in maintaining a properly manned army.

A conscript who has escaped Eritrea informed Gedab News, “the government can’t feed the army, so they told us to stay at home to mend for ourselves.”

The conscript had stayed in his village for five months with his parents before escaping to Sudan and is now planning the second leg of his journey to make it to Europe. He said, “I can’t stay with my ailing parents who depend on a small farm to feed themselves … hardly enough to feed them, my handicapped brother, and my widowed aunt.”

Several units of the Eritrean army are hallow and exist only in name, and often, “you find a squad guarding the installations of a camp that used to house a battalion.”

Many conscripts have taken advantage of the extended leave and left the country; the army is now facing difficulties in recalling them.

In what appears as an attempt to control the situation, the Eritrean immigration department has suspended the issuing of exit visas, but that hasn’t stopped the flocking of people who are crossing the borders of the country.

Insiders say, “the regime thought it could simply declare them AWOL and like the old times sweep the streets to forcefully return every missing conscript.”

Only a little over a third of the twenty-thousand senior-year high school students who were supposed to report for the last round of training in the Sawa military camp did so. The rest simply ignored the call and either left the country or went into hiding.

Around the country, some youngsters have resorted to brigandage and several mugging incidents by “youth holding sticks” were reported in Asmara. Residents in poorly lighted neighborhoods with narrow alleys “are so terrified of the situation they do not move alone at night.”

In order to ameliorate the shortage of soldiers, and keep order, the government has been trying to assemble the militia who were supposed to report to several localities, but the calls to report for “training” were largely ignored.

In urban centers, “very few militia reported, particularly in towns like Keren, Adi Kieh and Ghindae … only one person reported from Edaga Hamus” neighborhood of Asmara. It is worse in the countryside where citizens in many villages defiantly refused to report. In many places the dateline for reporting has been postponed for a second time.

Reports indicate that Ethiopia has deployed its forces on the South and Southwest of the Eritrean borders and its reconnaissance scouts are monitoring the region.

A teacher from southern Eritrean told Gedab News, “The regime is acting as if these are signs of an imminent Ethiopian incursion into Eritrea, and this has added to the anxiety of the population.”

Adding to the already building tension, on October 16, 2014, Sendek, an Ethiopian Amharic newspaper quoting official sources stated that the federal prosecutor has charged six residents of the Beni Shangul-Gumuz region for receiving political and military training in Eritrea. One of the charges is an attempt to disrupt the Ethiopian renaissance dam.

In March, 2012 Ethiopian forces attacked the camps of Ethiopian rebels group trained and hosted by the Eritrean government. The attack was believed to be a retaliation for “terrorist acts the groups carried out in Ethiopia.”

Ethiopia has a long standing policy, which was repeated by its Prime Minister in New York recently, that it will retaliate if it ever catches any of its Eritrean based opposition conducting “an act of terrorism in Ethiopia.”

Previous A New Wave Of Escapees Leaving Eritrea
Next An Interview With Dr. Berhan Ahmed