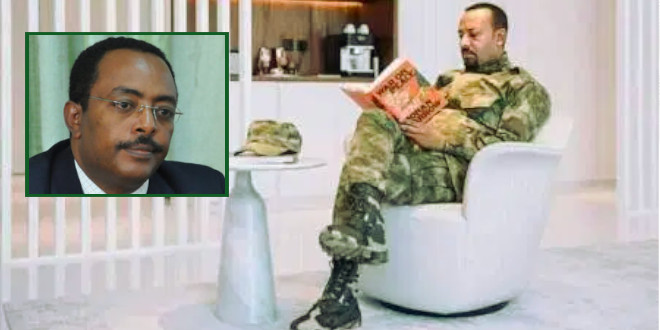 In the mid-seventies, a young boy attended a concert of a band assembled by General Werqu, the commander of the Ethiopian occupational army that spread from Karrora, to Umhager and Keren. The concert was held at Forto, where the young boy was jailed a few months earlier. Grudgingly returning to Forto as a spectator, he went through a tragi-comedic experience that is still vivid in his memory. Years later he wrote about it. Particularly, he remembered a certain low-rate singer named Gennene Debebe, who screamed a song of four, short, mediocre lines that he repeated for 20 minutes:

The singer had launched his singing career a few months ago in Asmara where he spurted his genius lyrics:

Gennene toured many Eritrean cities screaming the same song except he changed the name of the town he was in.

Currently, an Ethiopian propaganda musical troupe is touring Eritrea and it held a concert in Keren, similar to the one Gennene Debebe held decades ago. Certainly a few youngsters have grudgingly attended the show. In the future, at least one of the young children will write about the tragi-comedic experience just like I did. Yes, my hometown watched a supremacist singer shamelessly calling them Ethiopians, in Keren, the cradle of the Eritrean struggle against Ethiopian occupation. Even Hamelmal Abate, the Ethiopian singer, like many propaganda singers, sang flatteringly describing the people of Keren, a town she arrived to only a few hours earlier! It was a typical flattery of an  azmari-bet where tipsy patrons could not tell if what they hear through the loudspeaker is the voice of a braying donkey or a humanoid.

It seems the Ethiopian supremacists who can’t live without shedding blood for too long, are summoning the demons by endlessly provoking Eritreans, and they are blowing the whistle for the start of part two of the tragic past.  This time, the role of the collaborators and enablers of yesteryears is taken over by Isaias and his cohorts, while, Abiy Ahmed has assumed the role of the pompous Haile Selassie. The project manager is Radwan Hussein, Abiy’s ambassador, who was irritated by the Nov. 15, 2019 Gedab News that exposed the secret that he was not accredited more than a year after he arrived in Asmara. That concert is a revenge by Abiy and Redwan (and of course Isaias) because the news embarrassed them so much they wanted to prove to their patrons that their relationship is fine.

Here follows my story of “the young boy” who attended General Werqu’s concert decades ago, the precursor of the recent concert that I missed because I can’t visit Eritrea that has become a worse prison than the one I grew up in. It’s part of a chapter from my book “Of Kings and Bandits”.

COLONEL WELANA WAS NO MORE the supreme authority in Keren. The people were hopeful Werqu would be far better than him—no one could be worse than Welana. Werqu shunned the aloofness and scornful demeanor of Welana; he wanted to prove to the people that he was an enlightened man—and compared to Colonel Welana he was an angel. He immediately embarked on a pacification strategy and relaxed the curfew, pushing it back three hours to 9 p.m. For the first time since his early childhood, Jemal was reintroduced to the streets of Keren at night.

General Werqu carried his dark glasses and a wide smile everywhere. No one could read his eyes and he remained mysterious. He drove alone in a Jeep without guards, roamed about the bars, and sipped coffee in the verandas all by himself. He bowed his head to older people, a sign of humbleness and respect. In an attempt to portray a friendly image of the military and ease the tension, Werqu had began to learn the local language, though his heavy Amharic accent betrayed him.

Werqu looked like a professional soldier, someone who knows his enemies are the armed rebels and not the civilians who are caught between the fires. In a short time, he proved to be a refined soldier who doubled as a diplomat to win the fight against the rebellion. He must have despised Welana, he was never with him in his outing and instead, junior officers sat with him in the verandas of bars. The attitude of Janhoi’s soldiers had changed and they became less lethal in dealing with the civilian population. But all this was for naught.

“Don’t mistake the sight of the lion’s teeth for a smile,” Srnji said about Werqu, quoting an old Arabic poem, “he is still a Janhoi soldier.”

Janhoi had sat on the Ethiopian throne for almost fifty-years. He had stayed safe from the turbulences that shook the countries of the region. The rebellion had made a dent in his government but winning against him seemed still far away. Jemal wished officers like Werqu would depose Janhoi just like the officers in Sudan, Somalia and Libya had done. Then he thought it over and changed his mind—they would be the same soldiers who brutalized the people to protect the king. He laughed at the idea of protecting Janhoi in the streets of Keren while he lived in Ethiopia, a three-day bus trip away from Asmara; Jemal and his friends had to be jailed to protect Janhoi! The soldiers also protected Janhoi from innocent villagers whom they massacred in the hundreds!

Werqu was serious. He had assembled a musical band and invited the townspeople for a concert at the Tigu fortress. It was the first time for many to walk on the grounds of the ancient fortress, the heavily fortified Tigu hill. Jemal had been released from there about a year earlier. Now he was there with his friend Khalid. He glanced at the room in which he had been jailed and saw the low wattage yellowish light coming through the grill on top of the steel doors. He began to wonder what was happening inside and who might be there. Images of Mahmoud and Mubarek and the other prisoners flashed in his memory; he remembered Yegin with whom he had played checkers.

Jemal and Khalid walked further to the field to where the sound of the loud music came from. About ten musicians accompanied an Amharic singer, whose voice was lost in the piercing sounds of the brass instruments and drums. Another singer screamed a song about Keren in an attempt to sing in a local language. The people just watched more than they listened, not very amused. Curiosity had brought most people; they wanted to see what the notorious fort looked like. Now that the restraints of the curfew had been relaxed, they wanted to walk on the streets of their town at night once more. In Welana’s days, few of those who entered through the fortress gates had come out alive to tell about it. Everyone knew the concert was a propaganda ploy planned by General Werqu, the man with the lion’s teeth that was not smiling. The people just stood there as if against their will.

The light from the tungsten bulbs hanging on makeshift poles was glistening over the faces of the dancing soldiers. The music continued, obscure singers gave it their best try, soldiers tested their voices and band members sang more Amharic songs. Janhoi’s soldiers went into a dancing frenzy; most of them were villagers who were dancing in excitement as if it was the first time they were ever entertained. The concert, supposedly held for the townspeople, turned out to be an event for the homesick troops.

Jemal looked up to the highest point of the fort where the steep road with brick wall guardrails meandered to the top. He glanced to his left again, to the jail rooms and still wondered whatever happened of Yegin! He was in pensive mood until Khalid laughed hysterically, “Listen to that!” He said.

“Don’t you see who is singing? It is the prostitute from the Casino!”

Jemal saw the woman on the stage, she sung feverishly, repeating a two-word Amharic folksong for what seemed like eternity.

“Invited by Werqu and entertained by a prostitute,” Khalid whispered.

The troops didn’t think that way, they continued to swing and shake. Streaks of sweat flowed over their faces and soaked their shirts. Suddenly Jemal saw Mokria standing by the side with a blank face. Jemal had heard that the fat sergeant was gone and Mokria was reinstated in his old position as curfew enforcer; he seemed unhappy of its extension to 9 pm, now he would have less people to harass and jail. Jemal remembered all the sufferings that Mokria had caused. Kidane told him a lot about Mokria’s cruelty.

“Kidane and Omer! They might be doing some mischief somewhere,” Khalid said.

“Omer wouldn’t dare come to this place tonight; I see many soldiers who would kill him if he did,” Jemal said.

“I suspect Omer had started to drink; he can’t spend all that time with Kidane and not drink. You know, Kidane is not into tea.” Khalid said.

“Go and drink with Kidane if you want, not me anymore, I hate the smell. I almost died from throwing up the last time.”