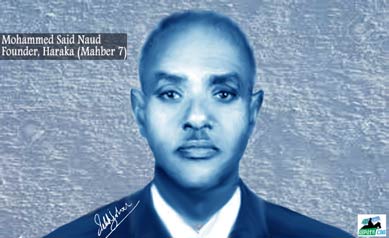 He is one of the fiery youngsters of the pre-armed-struggle era; a major personality of the late fifties and sixties. He is the visionary who saw beyond the Federation. An astute politician who planned ahead of time in preparation to the day when Haile Sellasie, as he foresaw, would abort the federation. He is the founder of the Eritrean Liberation Movement (ELM), known by its Arabic name Haraka and its Tigrinya name Mahber Shewaate. Our feature from the Fertile Womb today is Mohammed Said Naud, the legendary leader.

Mohammed Said Naud was born in 1936 in Sahel, Eritrea. After studying the Quraan, he attended middle school and high school in Port Sudan. After finishing high school, he was employed by the Eastern Telegraph Company in Port Sudan. At age 22, he resigned from his work and dedicated himself to the Eritrean case. On November 2, 1958, two weeks before General Aboud’s coup d’etat in Sudan, he founded a secret revolutionary movement, the Eritrean Liberation Movement (ELM), in Port Sudan.

In their first meeting, the members of the group agreed to expand membership by forming secret cells composed of seven persons. The secret nature of the movement was dictated by the prevailing suppressive nature of Ibrahim Aboud’s rule in the Sudan, who assumed power in a coup d’etat only two weeks after the founding of ELM, when Haile Selassie’s regime was almost finished with dismantling the federation arrangement.  This seven-member cell would be replicated within Eritrea.

Later, when the Eritrean Criminal Investigation Department (CID) uncovered a cell that belonged to the movement, all the apprehended were not able to name more than seven persons –members who belonged to their cell only. That’s why the CID coined the name ‘Mahber Shewaate” or “The Cell of Seven” to the group; the name follows the ELM to this day.

Due to the prudent and secretive nature of the movement, even Naud, the founder of the ELM, had to use aliases. He was known as Romadan Issa until it was uncovered and he had to change his name to Mustapha. The tradition of using code names started with his movement and many veterans of the armed struggle are still more known by their nom de guerre than by their real names.

Naud is a product of the post World War II era of rebellions and revolutions that engulfed the whole of Africa, the Arab region and the rest of the world beyond. He was influenced by various people in different parts of the world who rebelled to regain their sovereignty after having lived under the yoke of colonialism for too long. Leaders like Ghandi of India, Mohammed Ali Jinnah of Pakistan, Mao Tse Tung of China, Sukarno of Indonesia and General Giap of Vietnam influenced the young man. He was then determined to achieve for his people what the great men of the age achieved for theirs. In Africa, he looked in awe to the Mau-Mau rebellion of Jamo Kenyatta; the anti-French struggle of Ahmed Seko Touri of Guinea, and the Moslem Brotherhood’s struggle against the British colonizers. He was further inspired by the revolution of Gemal Abdel-Nasser of Egypt and the calculated move of the young officers he led and that eventually deposed King Farouq and ended the monarchy in Egypt. Naud was captivated by the revolutionary ideals of the world’s people. He aspired to follow suit and free Eritrea from the chain of federation with Ethiopia that he foresaw as a means used by Haile Sellassie to swallow Eritrea. Naud saw in himself a leader who would challenge Haile Sellasie and end the unwanted monarchial occupation of Eritrea.

An avid reader and an excellent writer, Naud aimed to mobilize the Eritrean society and lead a take-over of the government from within Eritrea. To this effect, the ELM was strongly committed to expanding its membership base. It penetrated the police and security apparatus in Eritrea and recruited followers and members from the Eritrean Police force in almost all police stations. The ELM recognized the Eritrean Police Force as an important element that would be at the forefront of the popular uprising during the final show-down with the occupation forces. The ELM gained a lot of support from the students and almost all professional unions and clubs. The Eritrean middle class was a dedicated supporter of the ELM: teachers, writers, artisans, traders and merchants were all represented in the ELM whose program was so clear that a takeover from within in a swift popular uprising seemed achievable.

Naud, admired for his sharp thinking and daring character, was full of energy and dedication. From his residence in Port Sudan, he had many times traveled to Eritrea incognito to meet members and appraise the situation in the country. In 1961, roughly two years after the founding of the ELM, he participated in an important secret meeting which was held in Asmara. The Asmara branch under the leadership of Yassin Aqedda organized the meeting which was held in one of Hassen Khiar Beyan houses. Representatives of ELM branches from all parts of Eritrea and Jeddah attended the meeting. That meeting is considered a milestone in the life of the ELM and was considered the first and the last meeting for any post-federation political organization inside Eritrea. A few months later, Awate started the armed struggle.

Awate’s launch of the armed struggle was a surprise to Naud and the ELM because it disrupted his plans to bring about a popular uprising that would end the Ethiopian occupation of Eritrea. Awate’s path was totally different from what the ELM had envisaged. Awate believed that nothing but an armed confrontation would bring about an end to the occupation. Naud’s efforts to communicate and coordinate with Awate were not successful because the messengers he sent to the Eritrean field to find Awate failed to locate him. Furthermore, Awate’s launch of the armed struggle was gaining sweeping support from the population. Not long after he launched the armed struggle, Awate died of malaria. His death was kept secret for fear of its negative effect on the morale of Eritrean patriots.

Soon, the ELM started to execute small-scale military operations inside Eritrea and several attempts on the life of important personalities who collaborated with the regime of Haile Sellasie were carried out. Such attempts were made on the life of Asfeha Weldemichael, president of the Executive Authority of Eritrea and Qeshi Dimitros, the staunch supporter of Haile Sellasie and the enemy of Eritrea’s independence. The real attempt, however, to organize a military presence was made just after the federal arrangement was dissolved and the Eritrean Flag was lowered on November 14, 1962. On December 19, 1962, members of the ELM who were officers in the Police Department made an attempt to form a military wing and escaped from their station after taking over considerable number of guns and ammunition. When the Ethiopian Army discovered of the incident, a force composed of 8oo soldiers supported by military helicopters went on a hot pursuit after the escaped patriots of the police force. The two forces clashed in a place in Dankalia where the leader of the group was martyred. Due to the unfavorable balance of power against them, the ELM members buried their weapons and crossed the sea to Saudi Arabia to reorganize themselves.

On the foreign front, the ELM started to look beyond the borders of Eritrea and Sudan to establish relations with foreign countries. Towords this end, Naud started a tour of North Africa that took him to Egypt, Tunisia, Libya and Algeria. He was successful in establishing relations and he opened an office in Cairo. Earlier, the ELM was able to buy a typewriter, the first major jump in the movement’s propaganda activity; Naud, the founder and leader of the movement, was also the only typist.

By 1965, after several attacks on police stations and personalities affiliated to Haile Sellassie’s rule, and the unfortunate failure of the Massawa police group, the ELM had finally organized a military wing composed of over forty members. The combatants entered Eritrea and continued mobilizing the Eritrean population for an armed struggle. Founded four years earlier, the ELF, which saw this as a duplication of efforts, and obsessed with unity to the extent of going violent, attacked the ELM’s force and liquidated it in August, 1965 in Ela Tsaada, Sahel. And that was the end of the ELM as a formidable organization.

But the ardent patriot Mohammed Said Naud did not give up struggling for the liberation of Eritrea. After the SudHa Ela congress, where the Eritrean Liberation Front-People’s Liberation Forces (ELF-PLF, the proto-party that gave rise to EPLF) was founded, the ELM became an integral part of the new organization.

Alongside Sabbe, Naud served in the ELF-PLF organization as a major leader for many years. When Eritrea was liberated in 1991, a short time later, Naud decided to stop life in foreign lands and traveled to Asmara. At one stage, he was the governor for the Sahel region. In 1996, Naud wrote a book of five hundred pages in Arabic entitled, “Haraket A’Tahreer Al Eritrea- Al Haqiqa We’tarikh” (Eritrean Liberation Movement – the Truth & The History”. In the introduction to the book Naud writes:

“…Now after 38 years from the birth of the Eritrean Liberation Movement, we ask ourselves: What was achieved from the objectives that we raise? I take the initiative and say in reply, our struggle has not finished yet, it continues. From our three objectives, the liberation of Eritrea only is realized. As for the other two objectives, namely the national unity and the formation of a democratic state, the struggle is continuing to realize them. And the path to these objectives is democratization – furnishing justice and equality among our people. And the struggle to achieve that would help us achieve a strong national unity, peace, stability and prosperity. But if we tread a different path, we will face unbearable difficulties. And so that this doesn’t happen, we are required to play a single tune which is: Eritrea is home to all Eritreans… they enjoy equal rights and obligations….and they equally participate in the construction and development of their country… and they safeguard peace and stability in their country with equal level of precaution and consciousness….”

The book is a rich source of information and a recommended reading for all who are interested in Eritrean history.

On September 16, 2010, Mohammed Said Naud passed away in Asmara where he had been living since he returned to Eritrea in 1991 just after the Ethiopian forces were pushed out of Eritrea. He was seventy four years old. The Eritrean ruling party’s website announced his death in two-sentences only: “Veteran Fighter Mohammed Seid Nawd was martyred today, September 16th 2010. The funeral service for the late veteran fighter would be held tomorrow at the Patriots Cemetery here in the capital at 10 am.”