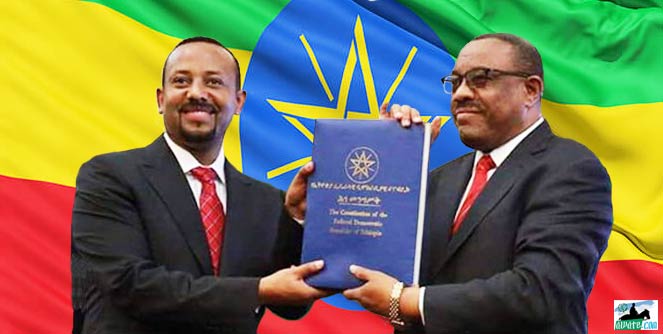 Americans do not declare something over, “until the fat lady sings”. It’s a colloquial language referring to a fat lady who apparently used to sing before the end of Operas. For the last six-weeks, everybody was waiting for the Ethiopian Parliament to sing and officially declare a prime minister. It did, and as many expected, it named Dr. Abiy Ahmed the new Prime Minister of Ethiopia. Congratulations Mr. prime minister.

Confirming the prime minister was a long process, but I found solace in browsing the social media platforms where many people were fixated on the faith of Abiy Ahmed. Many people didn’t know the Ethiopians were determined to confuse them. The discussions were reminiscent of the first Obama year when discussing the “Hussein” in Obama’s name seemed more important than his character and his leadership qualities. Leave the Ethiopian prime minister alone—neither the angels nor the demons choose the faith when they attach themselves to a person. And no one should care about his faith because the task was not to find a mosque imam or a parish priest but a prime minister for Ethiopia. At any rate, the horse-trading skills, the mixture of real-politics and consensus, and the overall maturity shown by Ethiopian politicians is admirable. Congratulations to all Ethiopians.

However, as I congratulate Dr. Abiy for becoming the prime minister of the Third Ethiopian Republic ©, remember that as an Eritrean, I am sick to the stomach with envy. And I cannot hide it. Unfortunately, I feel the Eritrean situation is no different than it was a long time ago. And the following anecdote illustrates that.

In 1994 I was part of a team sitting on a stage and managing the election of leaders for the Eritrean community. As voting started, a woman who was making tea in the kitchen came to the hall and saw people raising their hands. She exclaimed, “weyleke… id mlAal tejemiru!” (Oh… it’s time to raise hands!). She scanned for the local PFDJ “signal person”, a man named Yohannes, who had raised his hands in support of the motion. Immediately she raised her hand.

The mass-organizations of the PFDJ included many gullible but loyal members, and since they were not allowed to make independent choices, they were instructed to check and to vote for whatever the “signal person” for the day voted.  Like many others, the tea-lady had no clue what the voting was all about. That was the last meeting I attended among the PFDJ—I didn’t want to kill more brain cells.

Unfortunately, many Eritreans are still scanning the crowd to see what their local “signal person” is doing to stay in the groupthink parameters, to do what the Yohannes of the day is doing, and to mimic every word he says.

That being the introduction, the following is my message to the prime minister.

I hope, somehow, someone will bring this message to your attention. Also, I am hoping it will pave the way for a wider awareness about why Eritreans have failed, and how the Ethiopians who handled the Eritrean portfolio have failed (and failed us), and what we wish to see going forward.

Yesterday I became aware of your call for peace where you invited “the Eritrean government to show the same sentiment.” At the first glance, it sounds positive, but I and many of my compatriots, are not looking for a shaky peace deal that reconciles governments while the suffering of the people continues unabated.

Your Excellency, I understand that your concern is Ethiopian interests, and your responsibility is to pursue your nation’s agenda. No one expects you to be concerned about Eritrea at the expense of your country—unless it concerns Ethiopian interest. It is with that understanding that I wish you luck in establishing peace with the PFDJ. However, please bear in mind that after a few months in office, your predecessor, Mr. Hailemariam Desalegn, told Al Jazeera Television, “If you ask me ‘Do you want to go to Asmara [the Eritrean capital] and sit down and negotiate with Isaias Afewerki?’, then I will say ‘yes’.”

That statement, though it was said many times by the late Meles Zenawi, received a wide coverage and many gullible people thought the two countries were on the verge of signing a peace treaty. The wishes were never realized.

Your Excellency, I understand that diplomatic statements must include niceties and require such rhetoric. However, if that is your chosen path, you owe it to the people of Ethiopia and Eritrea, to work for a comprehensive peace that includes all Eritreans, and all Ethiopians. Sealing a deal with the PFDJ government (an illegitimate entity) will only elongate the suffering of the people on both sides of the border. The PFDJ pretends it’s legitimate by totting its guns.

Generally, I wish you can open a new page and help in rectifying the confused and destructive policies that the two-pronged Ethiopian government pursues in relation to Eritrea. And I feel ashamed to testify that the relations of the Eritrean opposition with Ethiopia has moved nowhere. It remained fruitless, damaging, and an utter failure. I have no formal relationship with the Ethiopian government, but I must own my actions—I have endorsed the relationship and promoted it with a heavy cost, and it pains me to see it has abysmally failed to be worthwhile.

Mr. prime minister, two decades is a long time—compare what Ethiopia has achieved in the same period, (imagine it was one failure after another) and apply it to Eritrea! That is why we are saddened, disappointed, and frustrated. And many of the victims of the PFDJ are on the verge of giving up and searching for an alternative to the dysfunctional relationship our opposition forces maintained with the Ethiopian government.

I will leave the boringly long details for another opportune time, but for now, let me whisper the following to your ears, though I understand that one way or another, as a senior official, you were involved in the affairs of the Eritrean opposition. But I have to say it:

The problem begins with the undefined, haphazard nature of the opposition’s relations with the Ethiopian government. Our opposition has been torn apart by two Ethiopian orientations: the diplomatic wing and the intelligence wing. Eritreans can guess, but we have no idea which of the two is the superior wing in the Eritrean case, particularly when we see select-favoritism, heavy-handedness, and interference.

Then, there is the other disorienting aspect affecting the opposition: the status of the so-called Sana’a Forum is vague and misleading. Sana’a, the capital city after which the office is named, is in an unenviable situation, and the remains of Ali Abdella Saleh, the Yemeni leader who signed the deal, has been buried a while ago. Sudan, supposedly the second partner, has long allied itself with Isaias Afwerki and has remained so until recently, and no one knows where its policies vis-à-vis the Eritrean opposition is leading to. So, it seems the Sana’a Forum is solely an Ethiopian affair.

The third crippling aspect is the Ethiopian policy concerning the opposition forces. The relations seems to have been always controlled by the local government of Tigrai as opposed to the Federal Ethiopian government. It’s true that Tigrai is the closest to Eritrea and the situation there affects it more than the other Ethiopian regions. But there also lies the problem: the Ethiopian policy towards Eritrea has been grounded in making Eritrea a replica of Ethiopia, Kilil and all, something that has been aggressively pushed on the opposition.

The inedible fruits of that policy are displayed everywhere, making Eritreans worrisome about the consequences. And though it is of a limited scope, we see troublesome, chauvinistic, primordial aspirations getting a new lease on life. If such dangerous developments are not checked quickly, it would certainly create instability in Eritrea, and that would certainly destabilize Ethiopia. Sadly, the agitators do not seem to understand that cross-border relations are not limited to linguistic affiliations, they can easily cause affiliations on other levels. And these can equally be tickled and cause the massaging of raw nerves as a reaction. I would think any sane follower of the politics of the region would understand the risk of such developments.

Here, let me state that I am part of a task group of Eritreans that took an initiative to establish formal relations with the Ethiopian officials to discuss such thorny issues. The task force was formed over three years ago and its initiative was passed to senior Ethiopian officials, four times since 2015. Unfortunately, Ethiopian officials seem to be very busy to even acknowledge receipt, as a formality if not as a requirement of basic decency. Still, the initiative is open, and the team that owns it is determined to pursue it further until it thinks it has met a concrete wall.

Your Excellency, I will conclude by wishing you luck in dealing with the challenges ahead of you, and in pushing Ethiopia further towards liberal democracy, further towards the rule of law, and gradually scrape the revolutionary democracy that has brought Ethiopia this far, though with admirable results, and usher the country towards a full-fledged liberal democracy. Importantly, I hope you would reach out to the Ethiopian opposition, those outside the EPRDF fold or in the Diaspora, and embark on a national healing process so that you can move towards cementing a political unity for the good of your country.

I wish you luck, and again, congratulations.