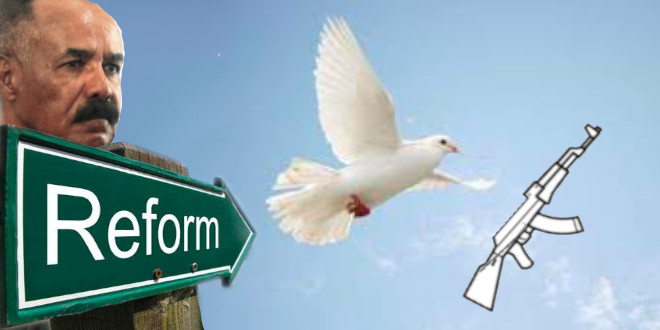 Eritrea has no constitution, no parliament, and no democratically elected president. The symbolic state machinery and institutions are not serving the country and the people. In the early 1990s, Isaias gained trust of the Eritrean people when he proclaimed democracy, freedom, and welfare to the people

At the beginning, he was a celebrated freedom fighter and a charismatic peoples’ leader. He provided hope not only for the Eritrean people, but for the whole African continent. Eritrea and its leaders became role models for many developing countries’ people.

Then, the atmosphere was inspiring and I published a couple of articles in the official Eritrean newspaper, “Haddas Eritrea” on the following topics:

This was in the right direction for a democratic government that should not censor opinions.

But Isaias has been a military leader for over 30 year when Eritrea gained its independence. It was naïve of us to expect a democrat out of a war hardened army commander with all facts on hand. His experience was about power and politics of war. In the late 1990s, the Eritrean People´s Liberation Front (EPLF) became the sole political party and the only allowed actor in socio-economical fields. Import of goods (nothing to mention about export), construction, transport, housing, etc., were and still are EPLF owned.

Just after the independence, many Eritreans who returned home hoping to start a business in their beloved country received many excuses from the state machinery in denying them licenses. Though on paper they should, EPLF did not want competition in the market so they had to create a lot of bureaucracy to the applicants who finally lost patience and left the country, ruined.

The poor people stayed inside the country, started complaining about lack of food, jobs and houses. They started questioning the ability of the regime to put things right. Surprisingly, Isaias and the regime started to act differently, distancing themselves from the people and finding different excuses for not doing many things. Like many dictators who once admired and celebrated freedom fighters, they refused to step down once they secured power. Isaias started to act like one.

The Eritrean people did not see this coming, at least not soon enough.

“Create crisis, threaten the people, divide them, and if that does not help detain all of them” is what all dictators do to prolong their stay in power and that was true for Isaias, too. Lies about foreign powers threatening the sovereignty of Eritrea; lies about Eritrean individuals, groups, and the free press plotting against the state of Eritrea and disobedient officials were painted with lies.

What would be more suitable in 1998 than to go to war against the former colonial Ethiopia, which was a “great friend” between 1991 and 1998? State of emergency was proclaimed, indefinite military service was instituted, parliament and a free press were closed, the drafted constitution was put on hold, dozens of long-serving freedom fighters possibly threatening Isaias’ power were arrested. Suddenly, Eritrea became a lawless country ruled by a tyrant—as John Locke says, “”Wherever law ends, tyranny begins”.

I will not analyze the background to the conflict since it is very blurred by different tales and there are historians who could do it better. Nevertheless, Eritrea did not afford to go to war; if it had a reasonable government that thought twice and looked for options before jeopardizing Eritrean lives.

Who fired the first killing shot that ignited the war, is not relevant. Why did two countries that a few years ago had a good political relation, open borders, and free trade declare war on each other overnight?

As in Eritrea, Ethiopia was led by a copious dictator, Meles Zenawi, who was a good friend of Isaias during the liberation struggle. Was it simply about power within and beyond each other’s borders? Did Badme really matter?

The war lasted between 1998 and 2000 and cost the lives of 100,000 people from both countries. The number of displaced people in Eritrea, and Eritreans who have been expelled from Ethiopia, was at least double that number.

Young people, the hope of the Eritrean future fled the country. Thousands died and still are dying in African deserts, detention centers, or drawn in the Mediterranean Sea while fleeing to save their lives. The world community screams and condemns the regime for its unwillingness to respect human rights and care for its own people. What the world community has not understood is, that it is exactly what Isaias and the regime want: Empty the country of its youth who could eventually become a threat to its dictatorial rule. Isaias has done his homework, “avoid the wind of the Arab Spring from blowing towards Eritrea”, a movement in which the youth will have a decisive role.

In April 2018, when Abiy Ahmed was elected as the prime minister of Ethiopia, he addressed the country’s Parliament with a proposal to withdraw from Badme area and make peace with its nemesis Eritrea. It did not only surprise Isaias and his regime, but the whole world–including the two countries’ people who have been longing the normalization similar to the period between 1991-1998.

Abiy’s olive branch to Isaias was so unexpected it put the Eritrean regime in an unmanageable situation. It took two months before Isaias reacted to the olive branch from Addis Ababa. In June 20, 2018 in his speech at the Martyrs Memorial Day, Isaias said he is prepared to send an envoy to Addis Ababa.

There is no counterpart to the Ethiopian Parliament in Eritrea, therefore Isaias hand picked and sent an envoy composed his two most loyal servants: Osman Saleh and Yemane Gebreab. It seems the Eritrean regime is composed of these three guys only since there were no other Eritrean representative ever sent outside Eritrea

After some shuttle travels between Addis Ababa and Asmara, a peace agreement was signed between the Ethiopian government and Eritrean regime led by Isaias.

The agreement harms the Eritrean people, but it benefits Ethiopia, which can now fully focus on bringing the country towards democracy and economic growth. Now Isaias has no external enemies.  Both Ethiopia and the world community have given him their blessings that directly or indirectly puts him in a position to continue oppressing the Eritrean people in even more cruelly and arrogantly.

Reforms in Eritrea will be delayed

The Eritrean people have a very challenging and difficult task ahead.

1)      The Eritrean parliament has been dissolved  and the constitution it drafted is on hold probably awaiting to be disqualified and “renewed” by Isaias.

2)      There are no political parties or groups to take over WHEN Isaias and his regime fall down. There is no freedom of speech, justice and human rights, to freely and independently build parties

3)      All ministers and officials serving the Eritrean regime are above 65 years of age, and those aged between 18-50 years are retained as slaves in endless military and national service. Thousands of the under 30 years olds have fled the country.

4)      Almost all Eritrean academics, scientists, capitalists, and potential political leaders reside abroad, there is no significant opposition in the country while the Diaspora groups are divided into two categories,

They do not contribute to the country or to the daily life of the oppressed Eritreans. And those living inside the country are terrorized, enslaved, monitored or imprisoned with no potential for an uprising.

In my opinion, there are three things that could happen in Eritrea:

1)      Some military officers could overthrow the regime (from a military rule to another) which would lead to a situation like that of Somalia, Iraq and other countries influenced by the Arab Spring. This will not bring any fundamental change.

This is not a good option:

2)      International pressures for change, side by side with peoples’ uprising and disobedience  would probably make Isaias react by easing control, such as limiting the power of the military and national service period to 18 months, and a modified constitution might “soon” be released …but he will not offer a fundamental reform, specifically surrender power. As he put it on the 28th Independence Day of Eritrea, “we have to be patient, we have to analyze in detail and not rush into reforms and changes”.

This is also not an option

3)      When asked about reforms post peace agreement with Ethiopia, Yemane Ghebremeskel from the ministry of information arrogantly and contemptuously said, “it is up to the Eritreans and the Eritrean Government to decide what and when”, meaning if Isaias wants to, “take it, or leave the country”

This is not an option either.

What is the best alternative for Eritrean people then?

I don’t think anyone has a workable solution or a proposal on what will be the political changes in Eritrea.  Maybe a combination of the three options above, maybe another. What I am certain about is that, the Eritrean people have a long way to go for a composite democratic reform.

The first and most powerful tool is, unity among the Eritrean people. A united people that the regime can no longer divide-and-rule is a threat to Isaias. If the regime knows that it can no longer deceive, manipulate, or threaten with reprisals, it might bring some radical changes.

The second tool is, a genuine support from the world community. Not only rhetorical condemnation, but a serious one with active support. Sanctions against Eritrea were lifted, Eritrea is elected in UNHRC and many countries praised the “peace agreement” with Ethiopia hoping for reforms. An isolated regime, specially from the Arab world, might bring some radical changes

I also believe reforms and changes in Eritrea should take place while Isaias and/or the regime is sitting; even if that feels like a bitter medicine, it is necessary. In the absence of other parties, groups or leaders, the regime must formally lead until at least an elected parliament is formed as the first task to appoint an interim government before Isaias steps down and lift a pen to edit the Eritrean constitution giving him (and probably his heir) power for life. Only then will the machinery start to roll.