Tsion King and The Degezmati Muslims 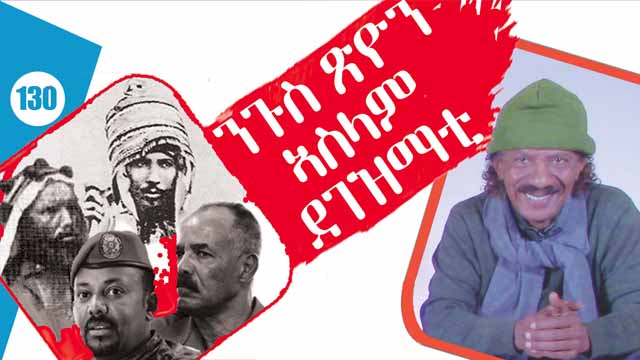 Until the 7th century, Abyssinia flourished under the Axumite Kingdom which replaced other kingdoms including Damot Belew, and others. It had good relations with the regional kingdoms as well as with the Romans, Persians, Indians. Then it collapsed.

Abyssinian presence in the Arabian Peninsula was so visible and the two cultures saw times of peace and war. Racially, both people claimed ancestry from Shem son of Noah (Semites) but in time, even that didn’t serve them.

After creating the Kebre-Negest myth in 1270 AD, the Abyssinian ruling class became a theocracy and all racial, culture and politics relations were made to serve the Church. Incidentally, the writer of the Kibre-Negest fables was Ibn Al-Assal. Another book that still shapes the Abyssinian Islamophobia is the narration of the 16th century conquests of Ahmed Gragn, is also written by Embaqom, Arab widely believed to a Muslim convert to Christianity. Today, most of the venerated saints of Abyssinia hailed from the Arab lands, including Abba Salama the most famous Egyptian Patriarch of Abyssinia.

Until European missionaries arrived, and later the Ottomans occupied the Red Sea shores, Abyssinia and the Arabs had a fair relation even when the Red Sea Dahlak Archipelago was under the Arab Umayyad rule. Arabic was visibly present in the Abyssinian the culture and the seals of the kings of the time carried Arabic inscription. Even King Yohannes’ seal had an Arabic inscription, and his governor of the Eritrean highlands had no qualms wearing an Arab garb.

In Eritrea, Muslims do not have as many saints but a few notable religious families, revered Sufis like Abdelkader Jelani, and the Quiraishi Mirqaniya family to whom Stti Alewiya, the black African belonged—she was the spiritual leader of the Eritrean Red Sea coast.

Axum was mainly destroyed by a queen named Yodit (aka Gudit, Esatu, Ga’aw, and many other names). The ruthless queen destroyed what little was left of the Axumite Kingdom.

Between 900 – 1137 AD, the Zagwe dynasty ruled the Abyssinian highlands Abyssinia; the dynasty ended when its last king Za-Ilmaknun the last Zagwe King was killed in battle by the forces of the Abyssinian King Yekuno Amlak, who claimed to be a descendant of Menelik, thus of king Solomon, and established the 2nd Solomonic dynasty. Abyssinian kings had to prove a Solomonic blood runs through their veins before they can be crowned, and most of the time, the church came up with fantastic stories to crown the powerful contenders. So did Yohannes claim a Solomonic ancestry and wreaked havoc in the region. But finally, the rule of the 2nd Solomonic dynasty ended in 1974 when the Derg overthrew king Haile Selassie.

Yohannes seal carries an inscription in Geez and Arabic. King of Kings Yohannes of Tsion and of Ethiopia. He was a bigoted and cruel ruler who cut the tongue of a theologian who contradicted him in a debate and ordered the blinding of king Tekhlegiorgis with a hot wire put on his eyes. Ras Alula was the absolute governor of Eritrea under king Yohannes.

The Conference of Buru Meda

Yohannes wanted to convert the entire country to one faith. To this end, in 1878 he held a theological council at Buru Meda, Wollo region of Abyssinia. Then he delegitimized all other sects and religions except his church which was known as Karra. Yohannes was so obsessed with the Christology debate of the time and the Buru Meda proclamation ordered the other Orthodox churches of Abyssinia (Sgga and Qbat), the Catholic, Protestant, and Muslim faith, as well as the Pagans, and others to covert and accept the Karra doctrines. If they refused to convert, they must either leave the territories he ruled over and go into exile or face the sword.

The proclamation was hard on Muslims, while most others could easily blend in and hide their faith, the Muslims had difficulty in hiding their faith due to some noticeable cultural traits that they couldn’t hide. They changed their names, their manners, and clothes to hide their faith—It was the time compound names became popular, Mohammed Berhan, Mohammed Hagos, Mohammed Saeed, Mohammed Saleh, Mohammed Nur, etc. And the women were given faith neutral names like Lemlem, Mebrat, and the like.

That was the time Ras Alula ruled the highlands and two of his deputies established camps carrying their names: The plateau of Adi Tekhlai and plain of Adi Gebru which today are large villages. As for the Tsegga and Qbbat, though they were forced to accept the decrees of the council, even today they still exist in small pockets in the region and to this day the Tewaḥdo faction dominates life in Abyssinia.

Complaining to the Naib

Abyssinian warlords travel with their pack animals, retinues, slaves, women, and children. When the men go to invade and pillage, their families are left in camps with a few guards and soon they established themselves where they settled. Until then, for instance, Adi Teklai and Adi Gebru served as internment camps for Muslims rounded up from their farms in the surrounding villages.

The Muslims could not bear the injustices and sought help from the Naib of Massawa who came to their rescue. He threatened Yohannes he will block Abyssinian access to the port unless he treated the Muslims nicely. Alula convinced Yohannes the matter was serious, and he devised a plan. Alula arranged for the Degiat of Tsazega to sponsor the Muslims so that they can have some freedom to move around and attend to their farms and houses, though most were taken by the hordes. Thereafter, the Muslims got a little relief. However, when Alula’s soldiers found Muslims moving freely, they harassed them: ‘You Muslim guy! Why are you moving around?’ The person would reply, “I am Aslamay Degezmati (Sponsored by the Degezmatch of the village of Tsaazega).

And that is the inspiration of the Islamophobia adopted by the bigots, the fascists who threaten Muslims: we will intern you; we will kill you; we will own you, etc. It’s that tradition they are dreaming of reviving. It’s probable they are children of the marauding peasant soldiers who arrived in the place with Alula and owned the land that earlier belonged to other people who were dispossessed of their lands. And they are not ashamed of referencing Israel as model of a religious state where they rule the rest. It’s the unjust anti-peace belief of “we own everything, and you do not exist.”

The mentality of intolerance and fanaticism of Yohannes is inherited by a segment of Abyssinian elite who never failed in agitating the masses using the language that Yohannes used in rallying his subjects. It’s even worse because unlike Yohannes whose agitation was spread through word of mouth at a very slow pace, todays sectarians use the internet to cover the world with their hate filled, bigoted messages. Still, they do not know what is behind the never-ending conflicts in our region or pretend not to know it. But it’s a conflict between hegemonic segments who come in different forms equipped with different reasoning fit for the time. But they are always true to their hegemonic aspirations. It’s the usual shifting alliances between the Abyssinian elite of the Amhara, Tigrai, and the Eritrean highlands with a little tweaking depending on the situation. The ruling elite have always abused their monopoly of power and they have nothing to show for it except ignorance, destitution, poverty, and bloodshed.

So, those dream of converting others or interning free citizens to appease their sick ego need to ask their Ancestors (abowatom and emowatom), to which sect their ancestors belonged before Yohannes forced them to convert.

NB: The above is a close translation of the content of Negarit 130 and is the 3rd part of a four-part series.