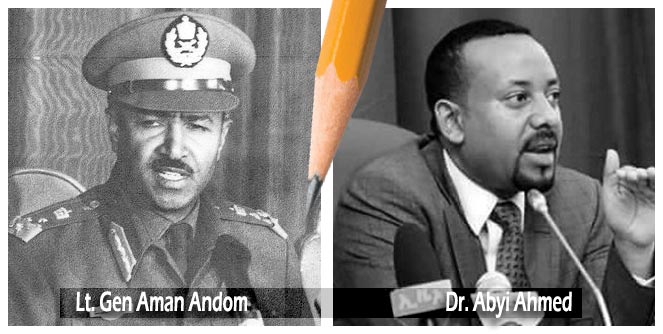 In our editorial published a month ago (1), we reiterated our long-standing position on the need for an end to the hostility between Eritrea and Ethiopia. We also hoped Isaias Afwerki would reconsider PM Abiy Ahmed’s proffer for peace rather than take a dismissive position as stated by his spokesperson tweeting the “ball is in your court”. Later on, we cringed when Isaias declared victory over the TPLF and at the same time announced his plan to send a delegation to Ethiopia. He also stated that he has accepted the peace offer because he surmised the ‘game is over’ for the TPLF’. Thereafter, we cringed again because we do not believe matters of war and peace should be considered lightly and be described by competitive sport metaphors.

Consequently, in a startling turnabout, the Eritrean ruling party abandoned its 18-year-old insistence of not holding a dialogue with the Ethiopian government until the last Ethiopian soldier leaves occupied Eritrea territories and the borders are demarcated. Instead, Isaias signed several agreements on peace and friendship with the visiting Ethiopian prime minister. And two days ago, the two parties declared an end to the state of war between the two countries. And a joint committee was formed under the foreign ministers of the two countries, to arrive at the final status of the border demarcation, including a multitude of thorny issues that are entrusted to the joint committee to study and propose solutions for.

True, the residents of Asmara gave PM Abyi a warm welcome when he arrived on Sunday, though the reception was not spontaneous. However, that was expected because the government had instructed Eritrean public servants, including teachers, days earlier, to line up in the streets of Asmara to receive the Ethiopian prime minister.

Take Two of the Euphoria

What appeared like a seemingly positive welcome of the Ethiopian delegation was reminiscent of the visit by Lt. Gen. Aman Andom, the chairman of the Derg, to Asmara on August 25, 1974 during which he gave a speech declaring the end of the imperial Ethiopian regime of Haile Selassie, and the end of the old practices towards Eritrea promising the people that his government would restore peace and prosperity in Eritrea.

In his second visit in 1974 following the massacre of dozens in Um-Hajar which was executed to undermine his peace mission, General Aman Andom promised to carry out an investigation into the crimes that were perpetrated on Eritreans by the second division of the Ethiopian army that was stationed in Eritrea.

Similar to General Aman who found himself at odds with the majority of the Derg leaders who hoped to crush the Eritrean liberation movement, PM Abiy’s peace initiative is a marked departure from EPRDF’s policy towards Eritrea which was mostly driven by the mutual animosity of the PFDJ and TPLF. Until PM Abiy was elected, the Ethiopia policy centered around a strategy of containment of Eritrea; the PM reversed that policy, and instead, decided to normalize the relationship with Eritrea.

Reconciliation is a prerequisite for peace, and admirably, PM Abiy Ahmed had acknowledged that the EPRDF government had committed acts of terrorism against the Ethiopian opposition. However, though PM Abiy offered condolences to the families of those who died during the Eritrean-Ethiopian border war of 1998-2000, he missed an opportunity to apologize for the crimes committed against the Eritrean people by successive Ethiopian governments, especially by members of the Derg who recently have been invited by his government to return to Ethiopia and who are already engaged in the Ethiopian political life.

The governments of the region, including PM’s, know very well that the Eritrean regime has been accused of committing crimes against humanity, yet, PM Abiy chose to cuddle a dictator for political expediency, to get on with his domestic agenda. It goes without saying that Eritreans concerned with human rights and the rule of law, considered PM Abiy’s speech as a display of utter hypocrisy: preaching peace and love to Ethiopians while failing to live up to his own moral standards when it comes to Eritreans.

Nonetheless, we welcome and hope this new development will help in ushering peace and reconciliation in the region. However, unless the people engaged in the suspension of their rationality, considering Abiy Ahmed’s visit as something surreal, that calls for the abandonment of realism and logic, for the sake of peace that has eluded the region for decades, there are many reasons why Eritreans are cautiously optimistic about the future. Needless to say, peace requires a willing, trusting, and worthy partner; that picture is not there yet for the following reasons:

Firstly, many Eritreans do not see peaceful and wise traits in Isaias Afwerki’s past behavior or disposition since he is still hell bent and preoccupied with settling old scores with TPLF at the expense of Eritrea’s wellbeing.

Moreover, just as Eritreans did not have a say in their future on August 1974 when they were represented by Amanuel Andemichael, the Derg appointed Governor General of Eritrea, today they are equally without a say on their affairs. Isaias Afwerki, with his narrow support base, rules with an iron fist and single-handedly decides on all matters of war and peace, and everything else in between, on behalf of Eritreans without their consent.

Secondly, as much as PM Abiy’s peace efforts appear genuine on the surface, just like the underlying reasons (famine and corrupt feudal aristocracy) that drove General Aman Andom to appeal to Eritreans for peace, the most compelling reason PM Abyi gave the Ethiopian parliament for his policies is, reducing the military budget which is draining the Ethiopian coffers at a time when the treasury is facing severe foreign exchange shortage.

Thus, both General Aman and PM Abiy were motivated to seek peace for reasons specific to Ethiopia’s internal problems and any improvement of neighborly relationship with Eritrea is tangential at best–it may or may not help PM Abiy Ahmed to overcome the Achilles’ heels that his predecessors stumbled upon in Eritrea. But regardless, we are afraid, just like some Eritreans were euphoric after hearing Aman Andom’s speech, we feel they are equally euphoric after hearing PM Abiy’s speech. Unfortunately, it is wise to remember that the Derg brutally brought Aman Andom’s initiative to an end.

Two weeks after his inauguration, PM Abiy Ahmed stated that [2]:

“the crisis with hard currency will not be solved today, nor will it in the next 15 or 20 years. There is an urgent need for more cooperation with the private sector to find a solution…”

We believe this urgent need for a hurried peace is what motivated the EPRDF ruling coalition after it was pressured by the international community to bring about political and economic reforms. Last fall when Ethiopia’s foreign exchange reserve plummeted with only enough reserves to pay for a few weeks of Ethiopia’s obligation, Christine Lagarde, the Managing Director of the International Monetary Fund (IMF) visited Ethiopia, the first visit ever in the organization’s 72-year history, to underscore the severity of the currency shortage. It is widely believed that the IMF director delivered a message of the impending dire economic consequence if Ethiopia fails to reform. She basically told the government that the writing was on the wall, a fact that the EPRDF and TPLF failed to see in their marathon meetings which they convened in the fall of 2017.

As a result, the Ethiopian Birr was devalued by 15% in October 2017–current exchange rate of the Ethiopian Birr (ETB) peaked to 38 ETB to one US dollar and dropped to 27.5 ETB presumably due to the UAE depositing $US 1 Billion, a lifeline to Ethiopia’s central bank to ease the hard currency crisis[3].

So far this year, Ethiopia defaulted on three Chinese loans which led China to scale back its investment in Ethiopia, while local contractors are complaining that the government is not meeting its financial obligations. Earlier this year, the IMF assessed the risk of debt distress in Ethiopia as “high” compared to the “moderate risk” rating assigned to it in 2017.

PM Abiy reportedly said that adding to the crunch is the dwindling remittances from the Ethiopian Diaspora, which had fallen for political reasons. This shortage was compounded by a decline in exports–many factories that generated revenues were burned down during the last few years of ethnic unrest. Saygin Dima, the manager of a Turkish textile firm told Reuters that at least a third of his factory was burned down [4]. The decrease in foreign exchange reserves has also been dwindling due to the general decline of coffee price, Ethiopia’s biggest foreign currency earner, which dropped by 60% from its peak in 2011, including the price of gold which dropped by 30% since mid-2011. Coffee and gold make up 25% and 11% of export earnings, respectively, of Ethiopian exports in 2016[5] .

Ethiopia, a country of 105 million people, heavily depends on imports, which totaled $US 16.7 Billion in 2016 and exports totaling US$2.8 Billion for the same year [6]. The country has had the fastest growing economy in Africa during the last decade, but the severe shortage of hard currency is expected to slow economic growth. The wait time for small investors to obtain a letter of credit (LC) from a bank in Ethiopia to import goods is more than a year. Depositors at Ethiopian banks are prohibited from withdrawing their own foreign currency unless they can prove that it will be utilized for importing goods in the manufacturing sector.

Moreover, the political, economic, and humanitarian challenges that Ethiopia faces are daunting. To his credit, PM Abiy managed to calm the ethnic unrest for now, but he has yet to address the underlying causes. For instance, the Oromia-Somali ethnic strife has internally displaced more than a half million people. In addition, the four-party EPRDF coalition, which suffers from its own schism and corruption, is unable to resolve a multitude of ethnic and historical grievances. There are worrisome alignment and realignment of political parties with some groups threatening the ethnic federalism that held Ethiopia together for the last 27 years. Worse, the demonization of entire ethnicities by some opposition groups will certainly further exacerbate ethnic tensions and lead to more violence and consequently, calls for the imposition of law and order, which often comes as a heavy-handed solution, is inevitable as witnessed in the aftermath of the Arab Spring uprising.

Hence, the aforementioned circumstance that compelled PM Abiy to seek peace will need to remain favorable and the attendant risk factors should stay manageable for him to complete his peace mission and at the same time get on with his domestic agenda.