Posted on September 4, 2018 by Awate Team in Pencil 7 Comments 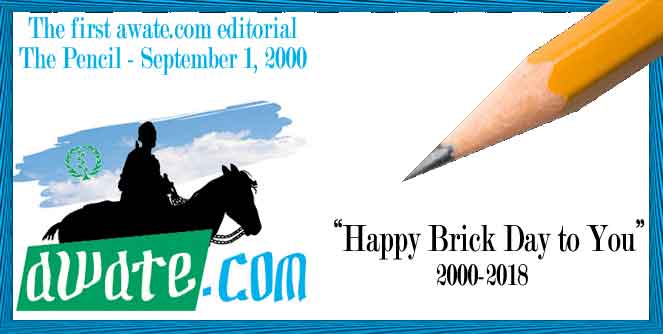 [This was the maiden awate.com editorial, “The Pencil” that appeared on September 1, 2000. The first day of the launch published the following articles:

A new window for self-expression. An extension of the fierce struggle to be heard. A blessing of the electronic age. An addition to the sister websites that cater to the needs of Eritreans…and the region beyond. Ladies and gentlemen, welcome to awate.com.

This site was conceived almost a year ago with an overly ambitious vision to serve the whole region of the Horn of Africa. In the initial design, the home page had a title: AWATE – the North Eastern Africa location, serving Eritrea, Ethiopia, Somalia, Kenya, Djibouti, and Kenya. By God, I was not kidding when I said the initial vision was overly ambitious.

What changed the vision (and killed the ambition), is a quick layman assessment of the situation of the region. The very high tension between Eritrea and Ethiopia that this site was conceived to contribute towards its defusing was ignited. It became a savage fire eating everything on its way. That came as a splash of cold water on the face after which, one is wide-awake and completely recovered from the terrible and ambitious hallucinations. After that, what else is there but to abandon the mission altogether? Yet, it was a reminder for us, as Tigrigna saying had it, to ‘look for the exact size of shoes’.

After all, even something called IGAD has become history. The acronym stood for something fancy that fought desertification, environmental degradation, disease, and anything evil… which by extension, made IGAD a noble organization. Then, they felt like making its name fancier. They changed it to mean something like ‘Inter-governmental Agency for Development’ – IGAD.

The funny thing is that IGAD created more deserts than it inherited. Eritrea and Ethiopia have been at each other’s throat for more than two years. The comb for which the two bald men fought is not yet found. The Somalis, reportedly, are proving that a country with a government is not necessarily better than a country without one. They are challenging civilization by offering private security officers and a private army. Again, Somalis are not taxed; they pay for services rendered – direct services! Satellite communication services with clear transmissions given on many enclaves under the patronage of a Warlord or a tribal chieftain.

As an observer remarked, “pieces of Somalia will develop internally and independently until they decide to form a country on their own free will”. That means Somalia will evolve from a public consent unlike the rest of Africa, where imposed colonial boundaries have become a never-ending malady.

Sudan is walking on the tracks of Haile Sellasie and trying to force the Southerners into a unity they do not want. I do not know a lot about Kenya except that the old man would not sign the title deed for the Real Estate named Kenya and relinquish power. Djibouti is Djibouti is Djibouti… a perfect joker card anyone would wish to have in a busy Vegas gambling table.

How do we go about our mission – that mission of making bricks! We really do not know and we were never brick makers. Nevertheless, at times, we claim to be the best there is. When we claim to be brick-makers, we direct our readers click the following (www.awate.com) & (mission statement) and see the recipe. When we claim to be masons, we ask you to contribute with your constructive bricks in the form of pictures, documents or articles to us. If you do not do that, there is a good chance that the very bricks that hold this site will crumble and, we have to blame ourselves; we will not have the vision to make neither bricks nor houses. Happy brick day to you.