Posted on September 6, 2018 by Saleh "Gadi" Johar in Negarit 6 Comments 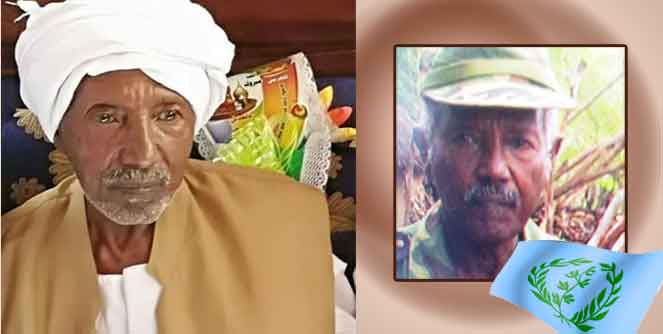 In the Name of Allah, the Most Beneficent, the Most Merciful.

“Among the believers are men true to what they promised Allah . Among them is he who has fulfilled his vow [to the death], and among them is he who awaits [his chance]. And they did not alter [the terms of their commitment] by any alteration –“ The Holy Koran.

The heroic leader, Hamid Mahmoud Hamid passed away in Kessela, Sudan, where he has been living exiled from his home after the liberation of the Eritrean territories, a struggle that he was part of since his formative years. Yesterday, his body was interred at the Hassen and Hussein burial grounds in Kessela.

The much-loved Hamid Mahmoud was a heroic leader who led the Eritrean liberation army in its most difficult times. I know him in the mid-seventies when I was in Hamassen when he was a commander of the army that closed on to Asmara. I walked with him on the outskirts of the city, in the villages of Tseazzega, Hazega, Himberti, Adi Tekhlai, Adi Gebru, and as close as the Radar installation. I had an opportunity to learn from him a lot after he literally forced me to his unit to become a translator for the then visiting journalists, Nicholas Downey of BBC, Gwynne Roberts, who was on an assigned for the Financial Times, and Jerome, a French photojournalist whom I think worked for Paris Match.

My memories of Hamid are mixed with memories of hunger, fatigue, frustration and funny anecdotes. One of the anecdotes stand out: my hair was so long because I never cut it for about two years. It was badly infested lice infestation. Hamid tried to convince me to cut it, but thinking I was Samson, I felt I would lose everything if I cut my long curly hair. But though Hamid was no Delilah, he prepared a pair of scissors and assaulted my hair while I was sleeping. It was too late after the first quick cut and no resistance would help—I submitted angrily, and I sat under a tree in Adi Hannes giving him ownership of my head which he mercilessly left with little hair.

In Adi Tekhlai, I was among the first to meet the two servicemen who were taken prisoners by a squad under the leadership of an Iraqi trained combatant, Efrem, who later had trouble in his ear after a bomb blasted close to him in a battle. The reporters were so happy they finally found a scoop. Gwynne Roberts was so excited that he decided to travel back to Sudan to send the interview films to London. He did and in two weeks, I was listening to the news on BBC, I think it was in the village of Dem Sebaay. Close by were two donkeys carrying the television camera and gears—and new and used film rolls in sacks.

I am recounting this just to express my feeling of loss because I never met Hamid after those days, I always wanted to see him, and I wanted to see if he had saved any of the pictures we had taken at the time. Though I planned to visit Sudan several times, but never got the chance to do that.

To date, I never heard anyone who raised Hamid’s name without admiring his strict commanding qualities and humble country boy demeanor. That is Hamid, who joins the line of heroes who are buried outside their country for which they paid with their lives. It’s in time like this of this that we need to remember the agonies and pain must stop. Eritrea is not narrow to accommodate its children as the tyrant makes it seem. Why should the fate of our heroes be buried in exile without breathing the air of a country?

That is the long journey of Hamid Mahmoud, in a very brief note.

At this moment, as we express our feelings, trying to immortalize our martyrs, and suppress our anger by imitating the patience of the likes of Hamid Mahmoud, we have to remember that it is upon us all– freedom loving Eritreans–to reclaim our pride, our dignity, and close the era of intolerance, oppression and bitterness for good. And the way we should do that is very clear: eradicate the rule of tyranny from the face of our beloved country.

I would like to pass my condolences to all the colleagues and student of Hamid, and on behalf of the ELF, to its leader Hussein Khalifa, and to the members of the organization at large. I also pass my condolences to the family and relatives of the late Hamid Mahmoud. As for me, a thankful student of Hamid, his name will always stay in my memories as a man from whom I learned a great deal in the struggle for which he stayed true until his last breath.