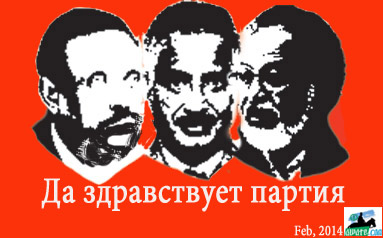 Another new “winter project” is upon us; Medrekh is its name.

To its credit, Medrekh has introduced another obscure term to the Eritrean Diaspora politics: Monocracy. I hold the PFDJ tyranny is not mono; it  is being played in stereo. I have a long held belief that any thought of reforming the regime is as bad as giving it a new lease on life.

A few years ago I learned from Adhanom Gebremariam, a relatively new Tigrinya lexicon which encapsulates my thinking: “sur-neqel”, the complete uprooting of the PFDJ’s unjust system. With that in mind, I believe any attempt to maintain the status quo by only removing Isaias, in any manner it is explained and justified, is futile. Eritrea needs a regime change and not palace coup d’etat.

Since I heard about Medrekh in March of 2013, I remained skeptical choosing to give the initiators the benefit of the doubt; in the end, I cautiously formed my views about their project. At this moment, I believe I have enough information about Medrekh and will partly share it in this edition of Negarit and more in subsequent editions where, among other things, I will address Mesfin Hagos’ status in Medrekh, which completely contradicts the claim some leaders of the project are making.

I hereby apologize to my friends who are within Medrekh; I do not question their decision to jump on the Medrekh wagon with the intention of doing their part in the struggle to unseat the PFDJ tyranny. But I hope they weigh their position carefully.

Allow me to congratulate you on launching Medrekh, a platform through which you have declared to fight the Eritrean tyrant.

Two weeks ago, I and my colleague Saleh Younis met Dr. Assefaw over lunch. He was charming. He still maintains a disarming and soft-spoken personality despite the thinly sprayed stinging remarks. As I promised Assefaw, I hereby share with you my personal views, both as a concerned individual and as a stakeholder in the well-being of the struggle against the PFDJ regime.

Discussing national issues requires openness and honesty and I hope you understand my views in the spirit I write them: to help you avoid the pitfalls of the past so that your project doesn’t become one of the numerous winter projects that had confused the opposition camp every year-end, to silently wrap up with no explanation afterwards.

At the outset, I would like to appeal to you to reevaluate your communications record; a weakness that is feeding the rumor mill…something the opposition camp doesn’t need. This is the main reason why I am expressing my views to you privately to avoid another season of demoralizing squabbles. Please help avoid another round of draining and negative public discourse.

Over the years, I have been actively involved in the opposition camp; sitting at the front row, watching the events (and dramas) of the opposition camp unfold, limp, and wither away. I have also been vocal in informing my readers in order to keep the promise that I had made when I first decided to fight the oppressive PFDJ regime; I have restrained myself from writing about your movement from fear of contributing to other confusion.

At this moment, I have a few concerns regarding your activities: (1) you are cannibalizing the existing activist entities instead of grooming your own. This doesn’t expand the opposition base; it hollows it out; (2) you are not contributing towards building a broad-based opposition which is the best way to defeat the PFDJ; (3) your position vis-a-vis the PFDJ is not clear; (4) the claim that you have connections in Eritrea may or may not be factual but the last entities that made such claims didn’t deliver on them; (5) at some point you will have to address the people and unless you prepare them by introducing yourselves, you will not get past the question of “where were you all these years?”

In what follows, allow me to elaborate on the above from the angle of: will your project work and what is the risk of a collateral damage.

Finally, please note that for the last two years or so, the opposition camp has been gaining unprecedented steady momentum. Kindly appreciate this momentum that the opposition camp has built with little resources, and refrain from damaging it. It is natural that many will see you as eagle-eyed politicians coming loaded with money to snatch the toil of others; you need a little humility to ameliorate the suspicion and skepticism. Of course, Eritreans have the right to struggle the way they see fit. But as a member of the broad opposition camp against the PFDJ, I appeal to you to please reconsider the way you are pursuing your affairs.

The above has been my attempt to help you see your image as perceived outside your closed circle; I hope you will be convinced to make the necessary adjustments.