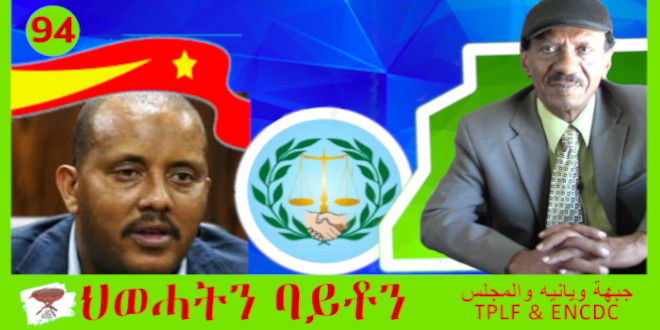 In my last episode I briefly mentioned Getachew Redda and I promised to return to him. But then I thought about it and realized that I have no issue with what he said apart from the one point which I addressed enough. Going to great length will put me in the position he was criticizing, nitpicking, and I decided against it. And since he is an intelligent politician, I chose to tell show a perspective that he might have missed. I trust his judgment.

Dear Getachew, I have nothing against what you said in your lengthy interview except what I mentioned last time . So, you had your say and I had mine, and we move on to more important issues.

I always wonder about the reason behind our region’s people infatuation with quarrels. Once more, last week confirmed to me we are.

After I mentioned “Getachew” in my last episode, several people tried to agitate me: “chfchf abello, keytgedfo,” while fewer heaped insults on me thinking they were defending him. Both sides have no constructive feedback; they just want to watch a quarrel, and I am not giving them the pleasure.

If today I vehemently attack Getachew, I know people will swarm just to watch a virtual wrestle. Unfortunately, if you had two store fronts, and you made one a library and the other a bar or a discotheque, you can guess which one will become overcrowded and which one will have a few patrons. I don’t try to attract the latter. That is why today many people will be disappointed because I will deny them the pleasure of watching a virtual quarrel. Instead, I will communicate with you honestly hoping to shed light on the core issues and because I trust you are more than capable to understand my perspective and not consider me an enemy for raising some thorny issues as some people did.

Dear Getachew, let me raise a few issues that happened during the struggle era, particularly concerning the Tigrai organization.

In the seventies and eighties, hot debates raged about the Soviet Union and whether it applied its political ideology correctly: aglassi, algassi diyu aykonen? That debate resulted in the formation and breakup of alliances. I was never a fan of Marxism though I proscribed to the prevalent progressive rhetoric—who among our generation wouldn’t? Equality, social justice and all the good things were our core values. But the political ideology of the Soviet Union was so important to the TPLF, and to certain extent to the EPLF and ELF. Therefore, cpmpared to that, defending Awate’s name was no worse than that. Why would that be less important? I will leave that to you. But in hindsight, knowing that someone inserted a stick in a moving wheel, I still believe the unplanned sounding remark against Awate is one of the reasons behind the many fracturing that followed.

Dear Getachew, you divided the Eritreans opposition forces into three categories, which is the view of the TPLF, which is natural for you, but not for me or many of my colleagues.

You accepted some of the shortcoming from the TPLF and that was noble of you. However, the Eritrean opposition went through heavy-handedness and interferences, some subtle others not so. The handlers at what was known as Sanaa’ office must have carried TPLF views and wanted to impose it on the opposition. The problem as I saw it is that the TPLF forgot the problems associated with a struggle once it became a government. However, it would be dishonest of me if I claim the opposition didn’t commit blunders and embarrassing things. But still, I always complained that in an alliance, at least that is how I understood the TPLF- opposition relations, the mistakes are mutual. Both had their hands in the failures we know so far.

Please imagine Qernelios was the Soviet Union of the seventies and tell me if the TPLF would be willing to swallow his pronouncements. First, you mentioned the opposition’s reaction but downplayed the action that ignited it. We have also to ask, why did he decide to start his attack if he knew “there was a worse shifta in Eritrea?”–to use your words! What emboldened him to confront his colleagues who were his allies in the Eritrean opposition? Didn’t he know many were silently struggling to bring the factions together, including the Islamist, ethnicity centered and other groups? Do you think the opposition was moving aimlessly? No. The opposition understood what ails it and what hinders it from achieving a unity of purpose. Unfortunately, the Sana’ forum had deqi wshTi and deqi Wesen within the Eritrean opposition. And if you honestly analyzed it, the deqi wshTi sided with Qernelios while those considered deqi wesen were furious about the irresponsible statements regarding Awate—that was not accidental. Furthermore, Awate was not the reason per-se, but the trigger that exposed what was in the chest. Please give the opposition some recognition, its members understand that much, at least.

Worse, it was not the orphan remark alone. What was happening after that incident and before it, was a manifestation of what we were fighting now. The opposition couldn’t accept representation by people who had no commitment to the Eritreans cause unless it is in synch with the Sanaa Forum’s views—and that entity had hegemonic influences. We didn’t like people who were not in the struggle, (the unknown people you mentioned), and who appeared like newly bought cows in a cattle barn, without undergoing scrutiny. The opposition’s grievances were well-founded and properly assessed– concerning individuals who sprung out as organizations and brought to conferences hastily. Worse, many of them were manufactured, provided recognition and supplied with resources, in Mekelle. To this day, most have become a thorn to Eritreanism and those of us who know the chronology of events cannot blame the Eritreans opposition for the destructive adventure.

Dear Getachew, could you please discern who is at the forefront of the regionalist, sectarian, and bigoted groupings that are standing against anything patriotic Eritreans stood for? You will get your answer after you see their mixed age group, but unfortunately, once a punching bag, is always the punching bag: the Eritrean opposition.

For your information, most of the groups that sprung in after 2010 would have joined the opposition and transformed it if they were prepared to pursue the struggle on the long haul. They were not. But the Sana’a Forum and a few other officials did embolden them. They thought victory was at hand and they followed the path that would install them in Eritrea with little toil and sweat. Dear Getachew, the groups of a dozen or less people were all emboldened, though not by Eritreans. They had no organization, yet, they were hastily assembled when they discovered entry to the opposition can be secured with a fee of $100.

Dear Getachew, I take the unspoken message behind your remark seriously: focus on important issues. That is goodhearted and good intentioned, and I thank you. But that requires open, honest, and tangible discussion. I have always advocated for that, but I had my own disappointment that doesn’t fit here. In time I will mention a proposal that would have helped get us out of the quagmire, but unfortunately some people subdued it. Still, now that the situation has changed, the stage requires an honest appraisal of the past experiences, hoping we all stop repeating the scandal of compartmentalizing Eritreans by age, by sex, by sect, by political background, or by region. My main issue has been with the elite’s perspective of a one-dimensional Eritrea and not as one entity. That requires diligent work and we must understand and resolve it properly if we are to make meaningful strides towards achieving durable peace, stable and productive relations among our people. the archaic village rhetoric of we both eat zigni or we both speak the same language must stop because it leads to destructive isolation and disenfranchisement. That kind of thinking is counterproductive and not fit for this era which should be based on humanity and centered around the equality of citizens.

Finally, as you know, over the las few decades of PFDJ rule, in addition to the silly rivalry and squabbles between Eritreans and other peoples, particularly Tigrayans, has escalated to new levels. That crippling zero sum game must end and instead we must work for a future of peace and stability. We owe it to ourselves, our children and our beleaguered people. So far, wars and instability has damaged the lives of  successive generations in our region. It’s time we cleaned the old mess. It’s time we shunned partisan politics that has hampered development. It’s time we delivered our people who yearn for peace, to an era normal life.

(listen to a sample of an audio file exclusive to Awate.com. It’s a recording of an interview with the late Melez Zenawi…the rest I will present soon in a separate program about the Nile Dam)

Now for those who expected to see a quarrel, and listen to cheap shots, I am sorry for their disappointment. I keep my little energy for meaningful fights and there is nothing I would fight over with Getachew—I am encouraging honest dialogue. So, that is the kind of fight you should expect, not bloody fights as if that produces anything. Honest discussions have a potential of bigger rewards. And the rewards are in the horizon, fast approaching our beleaguered nation, because as usual, the rooster’s crow is getting closer.