If Hamid Idris Awate Were Alive!

Posted on September 1, 2000 by Beyan Negash in Articles 0 Comments 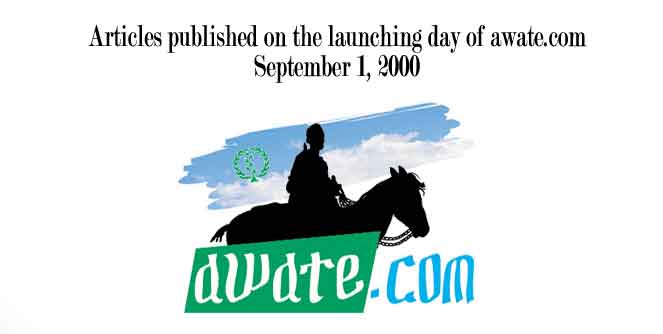 In this cyber age where information is disseminated at a nneck-breakingspeed to a point – leaving one, sometimes, to feel – as if one’s brain cells were about to get hay wired from the information overload, yet comes another website impetuously galloping, literally and figuratively, (see this new website) in its high horse with a numinous name, a name that educes a profound Eritrean history embracing within it – indeed, encompassing a paragon of the struggle of thirty years.

Awate.com will be launched, rightly so, on September 1st ,2000, coinciding with Hamid Idris Awate’s first day whence that bullet was fired (1961), marking the beginning of a long drawn out struggle to which the proceeding generation of Eritreans had carried the baton of the resistance movement until they were freed in 1991. I feel ineffably indebted, privileged, and honored to comment on the launching of this new website. I have been way too behind to stay in tune with the various existing websites and here comes another one pressing upon me to perhaps sleep less and venture further, so I may learn a great deal more.

The more the merrier succinctly applies here. And Awate.com has a very ambitious plans with a slight edge over the other existing websites in appealing not only to the Eritreans the world over but also to other Africans, especially those from the neighboring nations that are part of IGAD of which Eritrea is one, whose plights may not be identical, yet we would all be able to bridge the gap amongst us all. Narrowing the bridge of ignorance could only come as a result of dialogue. Dialogue is the only diaphanous elixir that will weed out ignorance and replace it with understanding, comprehension, and indeed one that will vivify what it means to be an Eritrean in the new millennium.

My sincere hope is that Awate.com becomes not only one that would exude and radiate such badly needed civil discourses with the world from without but also with our Eritrean world from within. Chasms of the abyss, the roots of which go as far back to the previous successive colonizers, need to be nipped in the bud. Again, the only panacea for such bad omen are best resolved through conversations and common understanding. Some might not see the socio-political revolution that’s taking place in Eritrea to a point of wishing to sleep through it all just like Rip Van Winkle that Martin Luther King has eloquently elucidated. MLK relates a story from his speech, the title of which is: “Remaining Awake Through a Great Revolution”: Rip slept twenty years…he slept through a revolution. While he was peacefully snoring up in the mountain a revolution was taking place that at points would change the course of history” and Rip knew nothing about it. He was asleep. Yes, he slept through a revolution. And one of the great liabilities of life is that all too many people find themselves living amid a great period of social change, and yet they fail to develop the new attitudes, the new mental responses, that the new situation demands. They end up sleeping through a revolution.”

Similarly, the very few in Eritrea’s case are resisting and fighting the overwhelming change that’s taking place in front of their eyes and thus are fighting it tooth and nail as though they were the only constabularies that know what’s good for Eritrea. Granted, they are not sleeping like Rip Van Winkle, but sometimes, it’s best to let the inevitable changes that must occur rather than profusely resisting them, one ought to just let it be, for there is no turning back now, the wind of change is galloping forward We might as well ride the band wagon of change.

It is because his land was taken from him when Hamid Idris Awate decided to fight for his by extension all the rest of Eritreans had followed his suit. I think if he were alive today he would be mightily proud of what his Eritrean children have accomplished. He would now have declared the time for raising arms to accomplish one’s goals are over. It is now na ew day in Eritrea and that the only mechanism left for us to accomplish equities in some pronounced inequities that are prevalent in Eritrea could only be ameliorated if & only if we sharpen our pencils, if & only if we put our pen into a paper, if & only if we fire away our fingers into the keyboards to share our concerns. To demand fairness, Awate would add, we would need to speak up in an unambiguous terms without any fear of retribution – for fear does crush the soul. And devastated souls might as well be long dead as I have been, he would add. Devastated souls know their existence by the carnality, which is less joyous and more inanely impish for its meaninglessness in such a context. To vivify and separate oneself from those of us who had passed on one needs and should compulsorily demand when one sees fairness being trampled upon. One must demand and compulsorily express one’s trepidations when one sees his people being unjustly used and abused. Lest you sleep through a socio-political revolution like that of Rip Van Winkle, Awate would’ve reminded Eritreans the world over. Change is inevitable sons and daughter of Eritrea.

Awate would continue to tell us about the exquisiteness of being deceased and the dinginess to it all while at the same time expressing the shadow bare bones of it and what it meant to be alive when he was on earth and that some extent of it should be spent wallowing and dialoguing over, however much less important those issues might seem to some – they all have the necessary part – a part that would become parcel of the whole without which life would be incomplete. The liminal nature of existence demands that both ordinary and extraordinary issues coexist hand in hand, thus, should be dealt with in such manner when it came to conversation. He would encourage the people of Eritrea to be a mirror to their government, not a distorted one but one that reflects accurately with its rear view mirror juxtaposed, serving as a reminder so as to refrain from repeating past mistakes by pointing out its shortcomings in whatever color it might come in. No one has a wholesale ownership and wholesale idea of what Eritrea means to us all.

Awate would’ve dissuaded and scolded those who think what everything a government does, wholesale, as mightily right. The soul of par excellence would’ve cautioned us to never turn him or any other leader – dead or alive – into apotheosis, the transcendence of a being into a divine one, nor to an idol, nor to an extraterrestrial constellation He would remind us of any government being not the necessary angel, but the necessary evil, an evil that always requires profuse checking and rechecking. For, he would’ve added, he had lived to see how corrupting power could be, providing as evidence when his land was taken from him, thus the inception of the struggle for a nation hood called Eritrea. Change is inevitable my beloved country men/women halt your irrational sense of constabulary roles and yield your resistance, for this change is for good of all Eritrea, Awate would’ve added.

Finally, the only term that Awate could’ve found that adequately express his feelings to this new dimension of Eritreanity when it came to this crucial junction that Eritreans the world over find themselves in would’ve been a sense of an awe inspiration, a numinous feelings, feelings that usually are associated with rthe eligious phenomenon. But then hadn’t Eritrea been more than a religion to most Eritreans, he would’ve rhetorically asked and that he would’ve assured us of this “liminality” that renowned anthropologist of religion named Victor Turner had coined. This betwixt, the state of being in between a phase of transcendence better known as liminal is precisely what Eritreans are experiencing at this phase of their history – a religious phenomenon except forthe affinity of which is tied to a nation called Eritrea instead of to some divine power.

Not only that but dare I also say what the Greeks call “daimon” is at work in many Eritrean consciousness and conscience. “Daimonic guide” is a feeling that we have no name for but we feel its clear and certain presence within us. These instinctual “motivation” and deep passion of the change that we feel its inevitableness, perhaps, is that liminality tinkered with “diamonic guide” urging us from within and forcing us to break open the cul-de-sac that had been obstructing our perception and views, which now is inchoately inching its way deep within many Eritreans psyche at an ever rapid speed. So, let’s keep the dream alive and fight for any Eritrean and the country Eritrea who might be slightly disadvantaged, for the country that we all put before anything else, and a slight disadvantage being one too much to burden him/her with. And we should demand for nothing less. Perhaps, closing with a moving letter written by a soldier that expresses one person’s liniality and daimonic guide would do ample good in order of putting things in perspective. Major Sullivan Ballou (in 1861) from the battlefield wrote to his wife, “… My love for you is deathless. It seems to bind me with mighty cables that nothing but Omnipotence could break; and yet my love of Country comes over me like a strong wind and bears me unresistibly on with all these chains to the battlefield.”