Ethiopian PM on a State Visit to Saudi Arabia 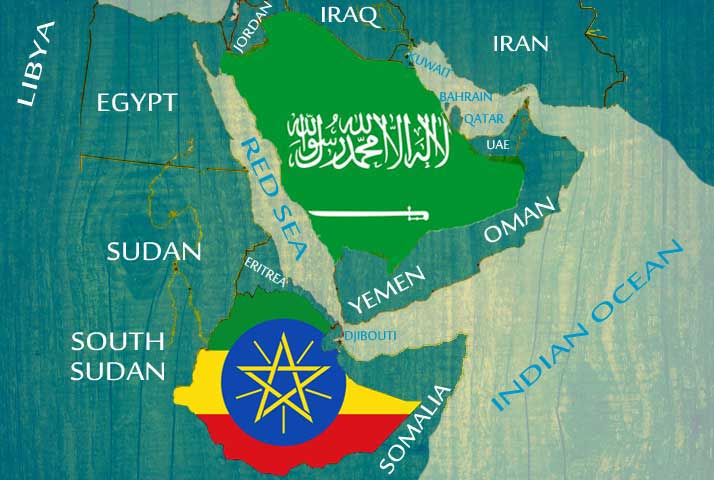 Bringing what seems an end to an almost two-year old speculation about worsening relations between Ethiopia and the Arab Gulf countries, Prime Minister Hailemariam Desalegn is on the second day of a state visit to Saudi Arabia. However, diplomatic relations in the region are generally unstable and may change with any new development.

On Sunday, November 20, 2016, the Ethiopian Prime Minister’s airplane landed at King Salman Air Base Airport in Saudi Arabia. He was received by Crown Prince Mohammed bin Naif and other senior Saudi officials.

In the evening Hailemariam Desalegn discussed economic cooperation between the two countries with the Saudi Deputy Minister of Finance Dr. Hamad bin Sulaiman Al-Bazei, and with the Saudi Commerce and Investment Minister Majid Al-Qassabi.

During his visit, Hailemariam Desalgen will also discuss regional security with Saudi officials.

Last year, several outlets reported unconfirmed news that Saudi Arabia and the UAE signed a thirty-year lease agreement with Eritrea to use naval facilities in its territories around the port of Assab, adjacent to Bab Al-Mendeb, the Southern entrance to the Rec Sea. By the time the rumors spread, Saudi Arabia was several months into its military campaign against the Houthis in Yemen.

The UN Somalia-Eritrea Monitoring group reported that it received reports of “400 Eritrean troops are embedded with UAE forces battling Houthi rebels in Yemen.” That report, that has been spreading since March of 2015, as well as other related reports about Eritrea’s involvement in the Yemeni war were never confirmed.

Reacting to the news soon after it was reported by the UN investigators in October last year, the Ethiopian prime minister had warned Saudi Arabia and UAE of consequences if the military cooperation with Eritrea would lead to the destabilization of Ethiopia. However, Desalegn also stated that Saudi Arabia and UAE “have assured us that they would not be engaged in activities that would endanger the peace and security of Ethiopia.”

Though he had dismissed the news as lacking evidence to support it, Desalegn stated that the two countries would “evacuate the area as soon as the mission [in Yemen] is completed.”

Many observers have based their analysis on that rumor and predicted of worsening relations between Ethiopia and the Gulf countries.

Since Eritrea and Ethiopia fought a fierce border war between 1998 and 2000, the two countries have remained in a no-peace-no-war situation.