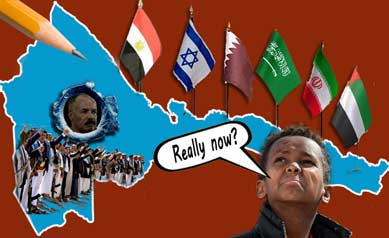 The claim that the United Arab Emirates has a military base in the Eritrean port of Asseb started out as a single, uncorroborated news report early this past summer and is ending the year being a major news story picked by many news agencies and UN investigators to the point that it is now an established fact. But is it? And, if it is not, why is the Government of Eritrea adamantly refusing to deny it and, in fact, having its satellite news sources fan the rumor?

The genesis of the story, the alleged United Arab Emirates military presence in the Eritrean port of Assab, is traced to May 9, 2015. That’s when a report appeared in the Turkish Anadolu Agency stating that “high-level delegations from Saudi Arabia and the United Arab Emirates – both members of the anti-Houthi coalition – visited Eritrea and toured a number of islands and ports close to Yemen, according to Eritrean sources.”

Quoting analysts, the report indicated “the Eritrean move to join the Saudi-led offensive [against Yemen] will help Asmara win support against its regional rivals Ethiopia and Djibouti, who have been quick to support the anti-Houthi onslaught.” And that, “joining the anti-Houthi campaign will also help Eritrea ease tension with the United States and remove sanctions imposed on the country by the UN Security Council in 2009.”

A blogger even went further with that news and entitled his blog “Saudis Visit Eritrea To Coordinate With Zionist Entity On Dahlak Island Navy Base?”

Also in May, the Indian Ocean Newsletter claimed that it “has learned that Asmara offered Riyadh to have the GCC military base in Eritrea rather than Djibouti.”

At about the same time, another news report added that the Saudi and Emirati officials crossed to Djibouti from Eritrea in a helicopter. Skepticism is warranted here: since 2008, when Djibouti and Eritrea came to blows over a border dispute, they have had an unresolved conflict requiring a third party, Qatar, to resolve the impasse with no success. How is it possible that Saudi and Emirati officials would cross from Eritrea to Djibouti?

In its October report, the Monitoring Group on Somalia and Eritrea (SEMG) repeated the above and, for good measure, added that Eritreans are embedded in the Emirati army. A quick reference to the footnotes shows that one of the sources that SEMG was referring to was a report by Tesfa News which, as the SEMG says, is “pro‑Eritrean regime media”; nonetheless, Tesfa News was merely aggregating a report originally filed by videonewsus which is part of the Turkish Anadolou Agency, the same originator of the news item.

Two days ago, a duo who consider themselves “experts on Eritrea” repeated the same story in a blog.

If It Is Not The Saudis or Emiratis, It Is Iranians…

On June 15, 2015,  Egyptian media giant Al Ahram quoted Ayman Shabana, a political science professor at the Institute of African Research and Studies at Cairo University, saying that Eritrea is “opening its land and the islands of the Dahlak archipelago on the Red Sea to Iran’s elite Quds Force and elements of the Iranian Revolutionary Guards, setting up an Iranian missile batteries near the Eritrean port of Assab, providing training, accommodation and [medical] treatment centres for the Iran-backed Houthis, stockpiling Iranian arms, and delivering them to the Houthis in the Yemeni port of Saada on small fishing boats, which wander between Assab and the Yemeni port of Harf Sufyan [in the Amran governorate, south of Saada].”

If you think this sounds definitive, Al Ahram then quotes the same professor saying, “But there is no conclusive physical evidence that proves the existence of Iranian missile batteries on Eritrean territory.”

…Or Maybe It Is The Israelis

For decades now, the presence of an Israeli base in the Eritrean Dahlak Archipelago has been a favorite subject of many in the Arab media. According to Wikilleaks report, the first such allegation was made in March 1973 , some 20 years before Eritrea’s independence. Kuwaiti Dr. Abdella AlNefisi, for instance, has been making that claim in the media for so long that he is now considered “an expert on the Israeli military presence in the Red Sea.”

What Is The Trigger For The Latest Rumors?

In April, the Saudi led “Resolute Storm” campaign in Yemen was in its second month and Isaias Afwerki of Eritrea, who has been suffering from the agony of irrelevance, was looking for a role to play in the crisis hoping to end his isolation and, finally, he traveled to Saudi Arabia.

In a visit arranged by Sudan’s Omer Al Bashir, on April 28, the Eritrean president met King Salman of Saudi Arabia. Immediately, speculations spread and several non-official news websites in the region and beyond basically repeated a version of Al Ahram’s report: Eritrea and Saudi Arabia agreed on a military and security cooperation to fight terrorism and piracy in the Red Sea, and not to allow any foreign interference in Yemen.

Outlets affiliated to the Eritrean government, however, promoted the visit as a ground breaking diplomatic, military and political victory, notwithstanding the fact that Saudi Arabia accorded a similar overture to Ethiopia, Djibouti, and Somalia.

On October 29, 2015, all of the speculations found an icing on the cake in a report published by Strafor, a Texas-based “global intelligence” company. Strafor adorned its report with a satellite image of  “Emirati ships” (plural) in the Eritrean port of Asseb, something it hadn’t done when, three years earlier, it had reported about “Iranian ships” in the same port. Given the size of the Asseb port, it is surprising that all these ships–Iranian, Israeli, Emirati–don’t run into each other.

In 2012, quoting the same Strafor, Israel national news had stated, “In 2008, Tehran struck a deal with Asmara to maintain a military presence in Assab–officially to protect the state-owned renovated Soviet-era oil refinery there….”

Strafor also reported that, “[a]ccording to Stratfor diplomatic and media sources, Israel has small naval teams in the Dahlak archipelago and Massawa and a listening post in Amba Soira.”

At 9,902 feet height, Amba Soira in the Akele Guzai region is known to Eritreans as the highest mountain in Eritrea, which would be a terrible place to locate an Israeli military base!

Now, on to the “Emirati ships” in Asseb, as reported by Strafor. Basic forensic of the photo shows the following:

1. Eritrea’s ambassador to the UN rejected claims that Eritrean soldiers are embedded with Emirati soldiers, but he did not deny that Eritrea is allied with Saudi Arabia in its war against the Houthis;

2. Eritrean websites affiliated with the Eritrean regime–Tesfanews.com and Eastafro.com–which are very selective about content they publish (always designed to rehabilitate the image of the Eritrean government or destroy that of Ethiopia’s) have publicized these claims.

Why is that?  There are only two possibilities: the news is true, or the news is false but a convenient falsehood. If it were true, the Eritrean regime would have gotten a benefit out of it. A deal of that sort will certainly secure Eritrea some fuel when the country has been without electricity ever since the downfall of Ghadaffi, who was the main financial backer of Isaias Afwerki. But power outages are still a daily occurrence; even the capital city of Asmara is dark most of its nights. Thus, we believe it is false and the Isaias Afwerki regime finds it in its interest to encourage this falsehood. Why?

Firstly, it wants to show the West that it is an indispensable ally in the Horn of Africa, even if it has to manufacture alliances that do not exist. It provides emotional relief to regime supporters and gullible observers, the so-called experts on the region, that Isaias and his regime have broken free from the siege they pushed themselves in. It might also advance lobbyist Herman Cohen’s marathon task to rehabilitate and “bring Eritrea in from the cold.”

Second, a regime facing severe economic hardship as evidenced by the flight of the youth, is now amenable to comply with Saudi and GCC countries request for some degree of cooperation.

But the Isaias Afwerki regime is not originator of these rumors; it is a free-rider. Who is fanning it? We believe it is none other than the intelligence services of what the SEMG coyly refers to as a “Horn of Africa member state.”

None of the above is to say that if Isaias Afwerki could a strike a deal to lease Asseb, to provide a base to anyone with large sums of hard currency, he wouldn’t. After all, in the early 2000s, he went on record (mostly through Girma Asmerom, his current ambassador to the UN, then the ambassador to the US) pleading with the United States to establish a base in Eritrea’s Red Sea. It’s possible that Isaias will strike a deal with the Saudis if the Yemeni crisis lingers on; we are simply stating that the claims made thus far are of dubious sources with questionable credibility.

We hope those who are parroting the story without any scrutiny (the so-called experts) will somehow demand a more convincing evidence before it becomes a yet another embarrassing episode of a classic case of rumor taking a life of its own and mushrooming to a major news only to be proven to be false in a matter of months.