Isaias Wants A Bigger Role In The Yemeni Crisis 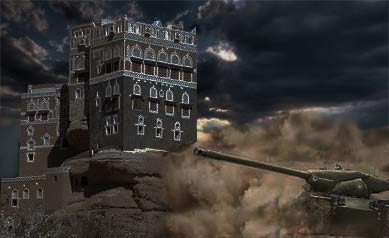 As many observers expected, the Yemeni crisis that has been brewing for many years has finally reached its peak. The Arab Spring phenomena that spread to most Arab countries had reached Yemen in 2011. Popular uprising culminated in the overthrow of the Yemeni strongman, Ali Abdullah Saleh.

Yemen remained unstable due to the unrest that has plagued most Arab countries. Presently, the unrest in Yemen and other post Arab Spring countries is being manifested in two types of distinct conflicts: to fill the power vacuum that was created in the aftermath of the uprisings, and a much nuanced rivalry between the of Shi’a and Sunni interests.

South Yemen has been a base for several groups, including AlQaeda and an assortment of others. However, it is Iran’s support of the Houthis that finally brought the simmering crisis of the region to a boil.

Though the world followed developments in Yemen for many years, most did not appreciate the gravity of the situation just like Ms. Mona Omar, the Egyptian ambassador to Eritrea, who a few months ago told AI-Monitor, “I don’t think that the threat posed by the Houthis to the Red Sea countries could spark a war in the true sense of a ‘war,’”

Eritrea In The Loop

On Wednesday night, Saudi Arabia launched an air bombardment of Houthi positions across Yemen. The operation, which is dubbed “Resolute Storm” (AlHazm), is a coalition led by Saudi Arabia and includes Kuwait, Bahrain, UAE, Qatar, Egypt, Jordan, Pakistan, Sudan and Morocco. Pakistan is the only non-Arab country in the coalition.

On Thursday, Saudi Arabia issued a warning threatening to bomb any ship trying to enter the Yemeni ports.

In Search Of A Role

Since it became headline news, President Isaias Afwerki of Eritrea has been trying to find a way to entangle himself in the Yemeni crisis, which basically has two dimensions: Internal Yemeni issue and Sunni-Shi’a rivalry. None of that concerns Eritrea, but the security of the Red Sea does.

On November 2014, Isaias Afwerki floated an initiative to discuss the security of the Red Sea with the countries of the region.

Though the Arab countries gave Isaias’ initiative a cold shoulder and politely hushed it, Fasil Gebreselasse, the Eritrean ambassador to Cairo explained that the failure of the initiative was due to the Arab concern about involving Israel in the security of the Red Sea.

In the same month, the Eritrean ambassador told youm7.com that, “the Arab countries rejected Israel’s presence [in the meeting] but it is possible for Egypt, Saudi Arabia, Eritrea, Yemen, Djibouti , and Sudan to meet and agree on a mechanism to protect peace and security in the Red Sea, without inviting foreign forces.”

Isaias has primarily invited Egypt and Saudi Arabia but he also sent feelers to several other countries along the Red Sea–none of them was interested.

A diplomat from the region informed Gedab News that the Eritrean president, “either thinks highly of himself or underestimates the Arab leaders to consider brokering any deal between the Arab countries and Israel, a feat countries with leverage failed to achieve.”

Djibouti has an unresolved border issue with Eritrea, and in December 1995, Eritrea and Yemen fought for three days over the Hanish Archipelago which three years later, the International Permanent Court of Arbitration awarded to Yemen.

The Yemeni franchise of the Arab Spring was inaugurated in the 2011 Yemeni popular uprising to unseat the regime of Ali Abdullah Saleh, who was in power in North Yemen since 1978, and continued after the 1990 unification of South and North Yemen, until he was deposed in 2012. He was 73 year old.

Tensions continued in Yemen when the Houthis emerged as a formidable force in North Yemen and challenged the central government. The situation was further exacerbated by Iran’s support of the Houthi rebellion. The Houthis, who are also known as Ansar Allah, belong to a small sect of the Shi’a, though they are the closest to the majority Sunni Muslims of Yemen who follow the Shaffie’ school of jurisprudence. Saada is the Houthis homeland, a region in North Yemen bordering Saudi Arabia.

Saudi Arabia shares more than 1500 kilometers of border with Yemen, mostly on the Empty Quarter, a harsh soft-sand desert in Saudi Arabia.

During the last six months, the Houthis swiftly fought their way from the extreme North of Yemen and captured large territories.They were about to occupy Aden in the extreme South of Yemen when the Saudi bombardment stopped them.

On Thursday the Yemeni president Abdu Rabbu Mensour was airlifted from Aden to Saudi Arabia. He had arrived in Aden last month after escaping from Sanaa where the Houthis had kept him under house arrest in his palace. On Friday, March 27, 2015, he arrived at Sharm El-Sheikh, Egypt, to attend an Arab League summit.

Egyptian battle ships are in the neighborhood of Bab El-Mendeb, the southern gateway to the Red Sea which is the lifeline for the Industries of Europe and North America. The northern exit of the Red Sea is through the Suez canal.

Shipping insurances and oil prices are expected to climb higher due to the Yemeni crisis and it is unpredictable how many nations will send their battle ships to the region. The USA and Europe will certainly have more, and visible, presence in addition to the forces they deployed to combat piracy a few years ago. USA drones are located In Djibouti, as Russian warships are lurking around.

Eritrean and Yemeni fishing dhows are sailing in the volatile region and will continue to do so, unless the sea is also set on fire.

Meanwhile, Eritrea is still watching the Yemeni crisis from 25 kilometers away; its president is planning to use the crisis to rehabilitate himself; its people are worried of its effects on their already deteriorated existence. We know how the war started, but no one can predict how it will end.