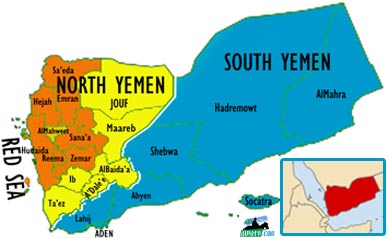 On Monday September 22, 2014, the Yemeni capital city, Sana’a, fell to the Houthi rebels with relatively little media coverage. Since then, the Houthi rebellion that started in the Sa’ada region of North Yemen, under the leadership of Abdulmalik AlHouthi, has controlled more territories; in the last two days alone they took over three regions, including Hudeidah. They now control about 85% of the Yemeni coastline on the Red Sea and about half the North Yemeni territories.

Yemen faces Eritrea across the Red Sea and on the north of Bab ElMendeb, the two countries are separated by a body of water about 20 miles wide. The Bab Al Mendeb straight connects the Red Sea to the Indian Ocean and many regional and international powers manipulate their foreign policies to gain control of it.

In the spring of this year, an Eritrean official accompanying Isaias Afwerki to Qatar complained about Prince Turki Al Faisel, Saudi Arabia’s former intelligence chief who now heads the King Faisal Center for Research and Islamic Studies, a think-tank in Riyadh. Saudi Arabia has reportedly accused the Isaias Afwerki regime of Eritrea for being, “a conduit to the Iran-backed Houthi rebels in Yemen.” At the time, Saudi Arabian and Yemen joint forces have been battling the Houthis in North Yemen.

The Houthis, who are named after their clan leader Abdulmalik AlHouthi, belong to the Zaidi sect of Yemen. The Zaidis, though considered Shi’a Muslims, are the closest to the Sunni Islam than any other Shi’a sect. However, beginning in 1980 when AyatoAllah Khomeini took power in Iran and fought a bloody war against Saddam Hussein’s Iraq for ten years, there has been increasing polarization between the Shi’a and Sunni Muslims. The conflict has now engulfed many countries in the Middle East, particularly Lebanon, Syria, Bahrain and to some extent Eastern Saudi Arabia.

Currently the proxy war is being fought in Iraq and Syria and it is expected to escalate and involve Lebanon and other places unless the ISIS onslaught on the region is brought under control. Different regional forces have been aligning themselves with one or another country, mainly Iran supporting the Shi’a, and Saudi Arabia supporting the Sunnis.

The recent Houthi rebellion is believed to be an extension of the bigger war in the region that has been suffering from  bad governance and poverty for many years.

In the aftermath of the Arab Spring, the Yemenis took to the streets and shook the power of president Ali Abdella Saleh forcing him to abdicate in a mediation brokered by the Arab Gulf States. However, like his predecessor, president Abd Rabbuh Mansur still faced worsening economic and political pressure made worse by an increase of attacks by the Arabian Peninsula franchise of AlQaeda. Yemen has not been stable for almost a decade now.

A few weeks ago, the Houthis who had slowed their rebellion erupted violently and marched towards San’a which they captured with relatively little bloodshed and surprised observers who expected worse. But for the most part, the fast advance of the Houthi’s was helped by the sudden collapse of the Yemeni forces who simply surrendered with no or little fight.

With the capture of San’a, the Houthis secured enough arms and resources to march in all directions; as of today, they control almost all the eastern half of North Yemen.

Meanwhile, development in North Yemen has prompted South Yemen to seek secession from a unity it reluctantly entered to in 1990 following a series of bloody wars between the two parts of Yemen.

On October 14, 2014, in a rally commemorating the 1963 revolution of South Yemen, politicians made clear calls for secession from the Yemeni union which a politician called, “The barbaric occupation of North Yemen.”

Regional governments are nervously observing the situation because given the turn of events in Iraq and Syria, and now in Yemen, they are facing difficulty in predicting where the events will lead further.

In 1995, Eritrea fought Yemen over the control of Hanish Archipelago; the case was resolved at the World Court. Eritrea lost the Hanish Islands which were at the center of the conflict.

Since then, the relations between the two country was lukewarm but occasionally tense due to Eritrea’s continual arrest of fishermen and their boats for allegedly fishing in Eritrean waters.

In the spring of this year, Eritrea promoted Mohammed Sheik Abduljalil, its previous consul in Qatar, to become its ambassador to Yemen.

Previous Eritrea: Few Embassies, Many Chanceries
Next The Commission of Inquiry on Eritrea: How Did We Get Here?