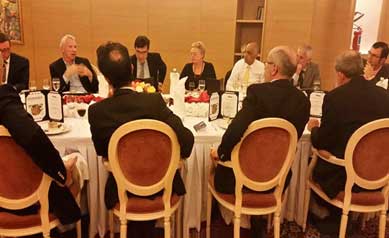 The democratic regime of Isaias Afwerki is known for its extensive informational (not propaganda) activities and thankfully it enjoys full monopoly over Eritrea’s airwaves and print media through which it has always been “Serving The Truth.”

The nascent Eritrean free press was squashed in 2001, as soon as it began to open its mouth and misbehave. Though some consider that an act of infanticide, the Isaias regime swears it was “just an abortion.” Since then, the regime has cleverly added to the arsenal of its media muscles: several websites stationed in the West, particularly in Sweden, Germany and the USA. A sigh of relief! Who needs a free press anyway?

On October 10, 2014, every media outlet owned or leased by the democratic regime of Eritrea showed President Isaias Afwerki receiving credentials of eleven ambassadors from many countries. The news made sure to remind readers of another batch of ambassadors: “It is to be recalled that President Isaias yesterday received the credentials of the Ambassadors of UK, Italy, Germany, European Union, Libya, South Sudan, Malta, Pakistan, Spain, Serbia, Canada, Norway and Tanzania.”

Obviously, it forgot to mention that the first group included a few gold-plated ambassadors.

It is crucial that you note, the president, may God protect him and give him longevity, has received the credentials of over twenty ambassadors in two days only. Marvelous!

When a president receives that many ambassadors, in two days, it proves that the democratic Eritrean regime has earned a certificate of good conduct and enjoys an excellent diplomatic standing among the world community. The dishonest and the uninitiated would dismiss the significance of the great events and would simply say, ‘that is not the case.‘ What is the case then?

The Asmara directory proudly lists a respectable (mind you, not inflated) number of embassies; while those who sinfully do not agree with the benevolent regime claim that Eritrea has the lowest number of resident embassies in the entire region. For instance, they claim that most of the diplomats that our beloved president received are non-resident ambassadors whose countries appoint them to Eritrea as a precaution for any eventuality, just in case they are needed—also to save their diplomats from boredom due to assignments in countries not as democratic as Eritrea.

The sinful erroneously add: there is no reason that compels most countries to appoint ambassadors to a country that doesn’t have good relation with its neighbors. That is a lie; we all know Eritrea has cozy relations with all countries, particularly with its neighbors. But the lies continue: the Eritrean embassy in Sudan, for example, is mainly engaged in intelligence operations, and that trade with Sudan is mainly contraband and is sub-contracted to (and handled by) smugglers. That kind of claim can only come from those who fail to recognize the greatness of the democratic Eritrean regime and its great president.

If that is not the case, are we to believe there are less than 20 permanent embassies in Asmara, mostly staffed by low level diplomats, and that the rest are run by ambassadors through a remote controller, from everywhere, Nairobi, Addis Ababa and Khartoum included? No at all.

A spoiler I know made calls to a few listed Embassies in Asmara; some of his calls were replied by Eritreans appointed as contacts—they do not have diplomatic status. Some are engaged in receiving and sending applications, and facilitating small transactions with the country they represent, and answering the phone, when the city power supply is on. The spoiler said, “a secretary answered one of my calls to a listed embassy number. When I asked to be transferred to the ambassador, the secretary told me the person in charge comes there after closing his shop in town and that he is an Eritrean who runs the embassy on part-time basis.” Of course, we do not have to believe that anti-Eritrean regime claim by the spoiler.

On October 12, Iqbal Jhazbhay, the South African Ambassador to the State of Eritrea (not Mandela’s South Africa, another one), stated that he was, “Glad to interact on the train with many of the 20 Ambassadors who presented their credentials to the Eritrean President.” But rumors had already spread around claiming that many of the visiting ambassadors left the country on the same day they arrived and didn’t make the train trip that Iqbal Jhazbhay enjoyed. Rumors! Now, would you believe his Excellency Iqbal Jhazbhay or the rumors?

The adorable South African ambassador is always excited (and genuine) when he makes statements (never bombastic); the haters characterize him wrongly and say, “he sounds more like an apprentice and mouthpiece of the Eritrean regime than an ambassador of South Africa [not Mandela’s].” Fortunately he is able to disprove their wrong characterization. He stated, “In the town of Nefasit, [I] had coffee at a shop where the owner interacted with Italian soldiers!”

You cannot talk about Eritrea without mentioning the Italians, can you?

Luckily, such miracles do happen in Eritrea; let me tell you why it is a miracle: the last Italian soldier left Eritrea after the defeat of the Fascists in 1941. A little math shows that was 73 years ago. If we assume that the man Iqbal Jhazbay met was 18 when he “interacted with the Italian soldiers”, he must have been born around 1923. And that, unless one uses a math different than the one Iqbal uses, the man is ninety-one years old this year. Yes. And amazingly he still owns a teashop and he runs it, in Nefasit, not in another planet that cannot be verified. Go ahead, verify it, you will find out his name is Methuselah. Iqbal is not talking of a person who owned the teashop decades ago though telepathy happens, it cannot be ruled out. This is the kind of miracle that the democratic Eritrean regime can summon to Eritrea!

There is no doubt the Eritrean regime is so loved and embraced by the world community to the extent that Isaias Afwerki also received a Vatican nuncio! But those who do not like the Eritrean regime claim it is a tyranny; they exaggerate and say that, “Most of those in Eritrea are not embassies, but legations, even if that is an outdated, obsolete term.” For God’s sake, the nuncio represents the Holy See! What would make them recognize the respect the democratic Eritrean regime enjoys in the world?

Success of the Eritrean democratic regime torments its opponents, and it wouldn’t be in the nature of the Eritrean regime if passes such a diplomatic success without milking it until it bleeds. Why, that would be against the doctrine of self-reliance that the Eritrean regime introduced to humanity! And that is why, again, on October 12, one of the proud regime websites carried news about, “another productive evening Dinner Roundtable discussion with Ambassadors.” It appears that was a dinner with, supposedly, ten ambassadors. Those are, it seems, the Europeans who often pay the PFDJ bills, and the bills of their would-be replacement, God bless them.

Two days ago there was news that the UN sanctions on Eritrea will not be lifted (another way of saying it will continue). Damn the UN.

Talking about the sanctions, after the “productive evening Dinner” in Asmara, two ambassadors hinted to some officials that they want to “have serious discussion with the Eritrean Government.” The source said, “their talk smelled of an attempt to reform the regime.” Excellent. Every Eritrean should feel jealous for not enjoying the aroma of what was cooking, after the dinner, regardless of what it smelled of, though surely it must have smelled yummy. Who knows, maybe the talk took place during a second unproductive dinner after the first “productive evening Dinner.” Two dinners! How generous of the democratic Eritrean regime!

Before I end this message of disappointment at my compatriots, let me tell you this: In a hush-hash voice, some Eritreans who actually refer to themselves as victims blame the ambassadors who supposedly had two dinners in one nigh, and pose a question: “why is it that the West never punishes the Eritrean regime for what it does to its own people, but only for what it does outside Eritrean borders?” They don’t know that “Outside borders is bad; inside borders is Kosher!” That is a preview of the upcoming new version of 1984.

Honestly, those who make such embarrassing remarks should be excused, they do not know how the benevolent and principled diplomacy of the West works. And they should know that the status of diplomats in Eritrea is supposedly (and hopefully) protected as per the definition of the Vienna Convention. Thanks to God there is no equivalent of that convention that protects (at least respects) the misguided Eritrean citizen. They haven’t suffered enough to deserve that kind of protection. Remember: Lies will set you free!

NB: Eritrean commonwealth image courtesy of the Eritrean regime websites that stays up all night “Serving The Truth.”