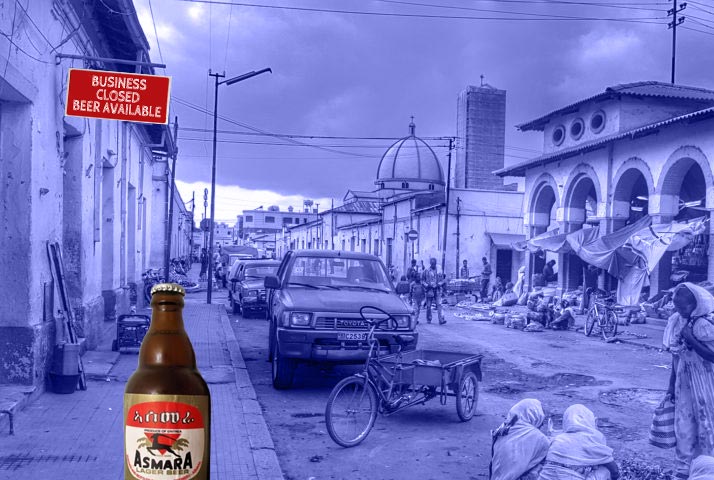 The recent government decision to withdraw the licenses of businesses and freeze their bank accounts has resulted in freezing the entire economy. Eritreans are complaining that the unpopular government policy has destroyed the already weak economy and made many people lose their means of livelihood.

So far, over 300 businesses that didn’t deposit their revenues in banks have been closed. Conversely, the ripple effect has reached the few suppliers and wholesalers who dealt with the closed businesses and they are also going through difficult times.

Villagers who supply the major markets with produce are watching their products go bad as restaurants and stores are not willing to buy them. A vegetable store owner said, “we cannot buy more when the vegetable and fruits that we already had have perished for lack of buyers whose businesses are closed.”

In addition, villagers who sell chicken, goats and produce to the major markets are not willing to receive checks for their sales.

Likewise, the owners of the closed businesses are also having difficulties paying salaries or end-of-service dues because their bank accounts are closed by the government. “Adversely”, a businessman said, “no one knows when and if they will ever allow us to reopen our business.”

Resentful relatives and friends of the business owners who were jailed by the security authorities, say, “neither the court nor the arresting officers have an idea about the fate of the jailed people.”

An economist veteran of the armed struggle said, “the ruling party never believed in free enterprise, its leaders always advanced command economy…worse, their policies are too intrusive and hindering the private sector from functioning effectively.”

Though the government proclamation requires businesses to pay for supplies and employee salaries in checks, not many are willing to accept checks except employees who have no other choice. However, “a closed business with a closed bank account cannot pay in any manner.”

Businesses affiliated to the ruling party, or those who have a close association with the government are going about their businesses unhindered, but the rest are either closed or trying hard to stay in business by devising smart ways to avoid being caught and to avoid the wrath of the government.

A resident of Asmara quipped, “you can only buy beer and a few other things with cash.”

A confiscated Italian relic, the only brewery in Eritrea and its flagship brand Melotti, is owned by the Eritrean government.