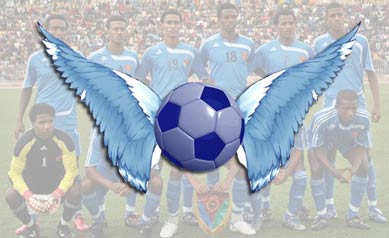 Ten Eritrean football player who arrived in Botswana with the national Eritrean team to play in the African qualifying matches for World Cup 2018, have absconded and sought political asylum in Botswana.

The Eritrean football team, “The Red Sea Camels,” had lost 3 to 1 against Botswana in Tuesday’s match.

The team is made up of players from the Diaspora as well as Eritreans still under the national service regime that is applicable to all Eritreans ages 18-40 for indefinite periods, sometimes extending over ten years. The Diaspora players have indicated their willingness to return home, though they do not live in Eritrea and carry foreign citizenship.

Most Eritreans who find an excuse to travel overseas usually prefer to remain behind to avoid the repressive situation at home. Travelling outside Eritrea is very strict, particularly for the youth, who escape out of the country braving the border areas where guards operate on shoot-to-kill orders.

The Eritrean delegation was composed of 24 people, including administrators.

Botswanan police have detained the ten players while a lawyer hired by EMHDR, an Eritrean group based in South Africa, is trying to protect the players from being forcefully returned to Eritrea. According to a source from Kenya, “the Eritrean government has deployed its diploamts in the region to pressure or influnce the Botswanan authorties to deport the players to Eritrea.”

The Eritrean team was composed of the following players:

While the names of the substitutes are: