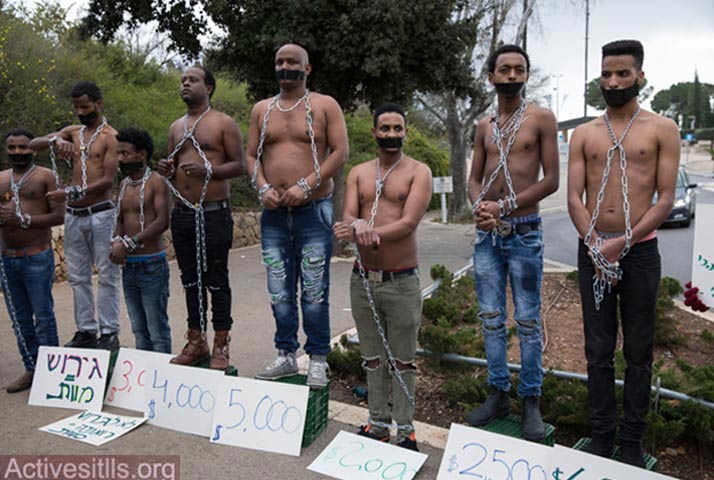 on January 17, 2018, Eritrean and Sudanese asylum seekers and activist staged a mock slave auction outside the Knesset in Jerusalem to protest Israeli plans to deport them back to the country they escaped from or to third countries. While Israel offered Rwanda and Uganda to receive the asylees at $3500 per person, Libyan Militias and ISIS has been auctioning them for $500 each as slaves.

In an interview that was aired Friday night on the Government-owned television, and in reaction to the refugee issues, President Isaias Afwerki of Eritrea disclosed that he asked the Israeli government to pay his government $50,000 per refugee to allow their return to Eritrea. Israel is planning a mass deportation of refugees to a third country if their country of origin refuses to accept them.

Though Isaias contested the number of Eritrean refugees in Israel, their number is estimated to be around 40,000 most of whom entered Israel illegally through the Sinai Peninsula, Egypt.

Isaias admitted to 20,00 refugees only.

The asking price to accept refugees to the country they fled from during the last ten years, based on Isaias Afwerki’s accepted numbers, is one-billion US dollars that Israel would have to pay Isaias so it can ship the refugees back to Eritrea.

In 1984, Isaias criticized the then Sudanese leader Jaafer AlNumeiri for collaborating in the selling of Ethiopians to Israel, while in 1991 he denounced the ex-Ethiopian dictator Mengistu Hailemariam as a man who sells his people to the same buyers. Rememmebrng that, an insider commented, “Maybe Isaias has planned for a ‘Reverse Operation Moses’ to blackmail Israel to pay him lots of money so that he can ship young Eritrean refugees who escaped his unjust and cruel rule, back to Eritrea.”

Most of the Eritrean refugees are youth who fled their country to avoid the indefinite “national service”, a mandatory conscription that is being enforced in the country since 1995. The national service conscripts are deployed in different mining, construction, and agricultural projects to provide free labor that many Eritreans and human rights activists consider “slave labor.”

While most of the Eritrean refugees escaped through the Sudanese and Ethiopian borders braving a shoot-to-kill order that the border patrols enforce, others were escorted to Sudan on military vehicles if they could afford the price that some Eritrean officers ask

Many of the escapees paid thousands of dollars to be smuggled by human traffickers who safely escort them to both Sudan and Ethiopia.

The smuggling ring is reportedly managed by senior Eritrean officers and their affiliates in collaboration with Sudanese officers who then sold them to the Beduin gangs in Sinai. Some observers suspect the extortion money and the proceeds from human organ harvesting was used to finance ISIS’ operations in the Sinai Peninsula.

Before Israel installed barbed-wire and deployed patrols in its border with Sinai, human traffickers charged between $20,000 to $40,000 to smuggle a person to Israel. Those who did not have relatives who would help pay the amount faced the risk of being taken hostage by the Bedouin smugglers and became victims of organ harvesting.

After the long journey to Israel, the ordeal of many African refugees, most of whom are Eritreans didn’t end because the anti-immigrant policies of Israel exposed them to internment and harassment.

Israel has given the refugees three months to accept deportation to third countries or face incarceration.