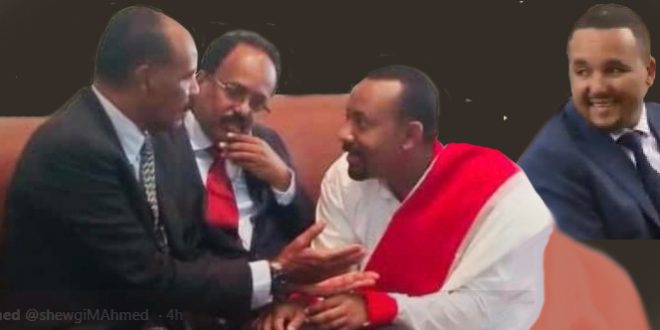 Objections by EPRDF bigwigs has delayed the long-planned visit by Isaias Afwerki of Eritrea to the Amara region of Ethiopia, which was announced over a month ago.

Isaias visit also triggered criticism by Mohammed Jawar, the director of Oromo Media Network and a popular mobilizer among the Ethiopian youth. On November 7, Jawar tweeted the following:

On Friday Isaias traveled to Gondar where the Ethiopian Prime Minister, Dr. Abiy Ahmed stated that Isaias’ grandfather is buried in Gondar.

Earlier, Dr. Abiy had altered the plans to avoid the embarrassment caused by Isaias’ visit which is only welcomed by Ethiopian nationalists on whom Dr. Aby pegs much of his popularity. In one of his speeches, he invoked the name of Emperor Tedros, the 19th-century king who committed suicide to avoid capture by General Napier in Meqdela, his hilltop fortress.

In 1868 General Napier had successfully led a British rescue mission to free 21 European hostages that King  Tedros took after the British government failed to respond to his request for military assistance.

Emperor Tedros is hailed by the region’s nationalists as a unifier while many present-day Ethiopians and Eritreans consider him a brutal expansionist who was relegated to the sidelines of Ethiopian history until he was rehabilitated towards the end of Haile Sellasie’s rule.

To remedy the situation, the Isaias visit was repackaged to appear as a tripartite meeting by hastily inviting President Mohammed Abdullahi Formaggio of Somalia as a face-saving ploy.

Abdullahi Formaggio arrived in Gondar one day after he was invited and accepted Dr. Abiy’s rash invitation in goodwill without realizing his presence was needed to cover-up and legitimize Isaias’ visit.

Several Somali politicians do not approve of their country’s interference in the Ethiopian-Ethiopian rivalry, or Ethiopian-Eritrean politics, that aim at squeezing the Tigrai regional government led by the TPLF.

Even after months of the much publicized “normalization” of relations with Ethiopia, Isaias Afwerki of Eritrea is still on a revenge mood to destroy his arch-enemies, the TPLF of Tigrai region. Observers in the region believe Dr. Abiy is playing in tandem with Isaias and in the plot.

Insiders informed Gedab News that “the three leaders are coordinating with the UAE to encircle and isolate Djibouti.” The UAE and Djibouti are not in good terms since “Dubai Ports World is bitter because Djibouti frustrated its attempts to control all the ports of the Horn of Africa region.”

Meanwhile, on Friday, while the three leaders were socializing in Gondar, three car bombs exploded around the Sahafi Hotel in Mogadishu, Somalia’s capital. Twenty-two people were killed and eighteen injured in an attack for which Al Shabab claimed responsibility.

A fourth bomb exploded as rescuers were rescuing the injured and a gun battle followed the incident. Reportedly, four of the assailants were killed in addition to the two suicide bombers killed in the cars.

On December 23, 2009, the UN Security Council Resolution adopted 1907 imposing sanctions on Eritrea due to Isaias Afwerki’s involvement and support of the Somali Al-Shabab group. The UN sanction is still enforced.

The Isaias government also supported the Yemeni Houthi rebels until three years ago when it switched sides. Since then it has been allied with the Saudi led coalition, providing an air and naval base on the Red Sea coast for the UAE forces that are involved in the bombing of Yemen.