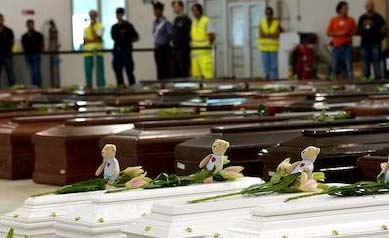 On Thursday, October 3, nearly 500 immigrants crowded on a 60-foot long boat originating in Libya were shipwrecked in Lampedusa, Italy when, due to mechanical problems–and the subsequent actions taken by passengers to draw the attention of rescuers–the boat was set on fire.

Despite the efforts of Italy’s Coast Guard, hundreds are presumed dead.

The incident has shocked the conscience of Europe in general and Italy, specifically, which has provided it with the wall-to-wall media coverage it warrants and declared Friday October 4th as a day of mourning.

On Sunday, Italy’s largest daily paper, Republicca, published a list of survivors compiled by the immigration office of Italy.  This is what the list shows:

Based on the data of the survivors, it is not unreasonable to conclude that almost all of the dead and the missing are Eritreans in their early twenties.

The realization of the magnitude of the tragedy, combined with the news blackout in Eritrea, has resulted not just in sweeping grief, but also righteous indignation among the Eritrean Diaspora communities.  Feeding this moral indignation is the callousness and indifference of the Eritrean government whose representatives have yet to publicly comment on mass media accessible to Eritreans in Eritrea.

The Network of Eritrean Women (NEW) has joined the Eritrean Youth Solidarity for Change (EYSC) in demanding that “the bodies of the victims be returned back home for proper burials.”  NEW goes further to demand that “all Eritrean political organizations, civic associations, youth movements, women organizations and human right activists…send their representatives to Lampedusa.”