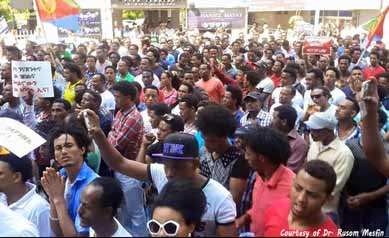 Until a few years ago, Israel was not a common destination for Eritreans, except a few elders who travel to Jerusalem for pilgrimage. Less than a decade ago, as life for Eritreans under the government became more daunting, where young people are subjected to indefinite conscription in the army that turns into long years of servitude and forced labor, the number of youth escaping across the borders increased drastically.

At this moment, the number of escapees leaving Eritrea is estimated at 5000 persons per month. The two major escape transit points, for a further destination, are Ethiopia and Sudan. To some extent, Yemen was a third transit destination until a few months ago when the civil war erupted there.

Most of those who reached Israel have gone through the ordeal of human trafficking, were held hostage, saw the body parts of their compatriots extracted, and witnessed rape and torture made it to Israel after their relatives paid hefty amounts of ransom to have them released.

The escape of large number of people encouraged criminals to exploit the situation by setting up a sophisticated human traffickers rackets. Soon, corrupt Eritrean and Sudanese officers were lured to join the criminal enterprise. While the Eritrean collaborators helped in smuggling and transporting the escapees, Sudanese collaborators apprehended the smuggled to identify those who have relative in the West, who could pay a ransom. Then they passed the contact list to regional smuggling rings that operate in the two major routes: Sudan-Libya/Egypt-Europe route, and Sudan-Egypt-Sinai-Israel route.

There are around 35,000 Eritrean refugees in Israel, though about 2000 of them are held in detention camps in the Negev desert. Israel considers them “infiltrators” and the law allows the warden to keep them for 20 months if not deported before that.

According to Human Rights Watch, thousands were unlawfully coerced and deported to third countries, mainly to Rwanda.

The ordeal that Eritreans have been going through for almost two decades was not taken seriously by the world community, though Eritrean activists and opposition elements tirelessly appealed and warned of the impending humanitarian crisis for many years.

During the last four years, the number of refugees flocking to the shores of Europe surged to unprecedented numbers and forced the panicked European governments to take the human rights situation in Eritrea seriously.

In 2014 the UN established the Commission of Inquiry on Eritrea which wrapped up its investigation and on June 8, 2015 by issuing a 487-page damning report detailing the causes that forces Eritreans, particularly the youth, to escape from their country through perilous borders in search of freedom. That is why tens of thousands of Eritreans ended up in Israel.

Last week, hundreds of Eritreans from across the United States and Canada demonstrated in Washington, DC, in support of the CoIE report and presented an appeal letter to the American authorities to provide their support for the Eritrean people.

On Thursday, about 2000 Eritreans demonstrated in front of the European Union Headquarters in the vicinity of Tel Aviv. The demonstrators expressed their support for the CoIE report and appealed to the Israeli government to recognize them as refugees in line with UN conventions.

As long as Eritrea is ruled by a repressive government under the leadership of Isaias Afwerki, the Eritrean situation will only worsen. According to the CoIE’s report, “systematic, widespread and gross human rights violations have been and are being committed in Eritrea under the authority of the Government.”

On Friday, June 26, Eritreans from across Europe will converge in the Place de Nations in Geneva, Switzerland, to demonstrate in support of the CoIE’s report and to appeal to the world to take stringent actions against. One of the organizers of the demonstration stated, “the repressive regime of Isaias Afwerki and his regime have been abusing Eritreans for over two decades, he should be forced to account for the gross human rights violations against Eritreans together with his inner circle.”