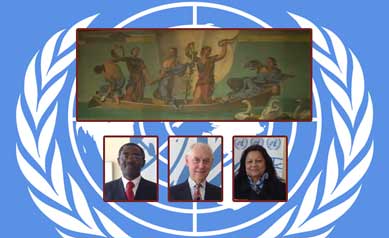 On June 24, the UN mandated Commission of Inquiry on Eritrea (CoIE) held a press conference. In his introductory statement, the chairman of the CoIE, Mike Smith, refuted claims by the Government of Eritrea that the commission is politically motivated and has sinister goals. He said, “…we have nothing but admiration for the country of Eritrea…we have a great deal of respect for the Eritrean people…we simply believe they do not deserve the system they found themselves with.”

In response to a question dealing with the duration of the mandate, Mr. Smith said that the CoIE’s mandate is virtually over; that the next steps are to be taken up by the Human Rights Council (HRC) and the UN General Assembly. The CoIE will report its findings to the General Assembly in October.

A reporter, quoting statements from spokesperson for  a “big rally estimated as 6,000 by its organizers”[the government organized demonstration held in Geneva a day earlier], asked how seriously does the CoIE take the rally, and claims that the CoIE relied on the exaggerated claims of asylum-seekers, some made by Ethiopians posing as Eritreans. And, isn’t the CoIE presenting the Government of Eritrea with two choices: opening up and implementation the CoIE recommendations or going down the path of the ICC [International Criminal Court]?

Mr. Smith began by answering the last question that, yes, the CoIE is the choice for Eritrea to either go down the path of opening up or heading to the ICC.  Mr Smith refuted the argument that the Commission’s report is based on exaggerated statements from individuals who have a vested interest in doing so to get their asylum status approved by stating that “many of the people we spoke to are secure in the place where they live now: their status is confirmed, they are working…and yet, their stories, about what happened to them, very much reflect those who are recently leaving, have more recently left from Eritrea and are in more vulnerable position.”   He went on to say, “We don’t believe we were duped…there was too much consistency in the way in which people were able to talk about their experiences…every story is different, every story is personal but the elements in the way in which they are treated, the way the system deals with them are sufficiently common that we are absolutely convinced that we described is accurate.”

With respect to the rally in Geneva, Mr. Smith was asked if they were called upon by the government or if it the rally was an expression of genuine feeling.

Acknowledging that the Eritrean Diaspora is deeply divided, Mr Smith responded that the Commission had found that people they spoke to had felt very intimidated in coming and talking with them because they felt that the system had reach into the countries they had sought asylum in and therefore “the government is able to influence the community quite a lot” through its youth organizations and the National Union of Eritrean Women (NUEW.)”

“And by that I mean officials who have overstepped the mark, who have abused people, who have tortured people to death or who have sexually abused young trainees…just examples of people who have been brought before the court and punished for that.  We haven’t had a single example of that.…or examples of people who have said, ‘they were charged with something; they were told what the charge was; they were brought before a court; they were given a lawyer to represent their interest; and at the end they were told their sentence. Almost never.  None of the people that we met…”

Asked about CoI’s bombshell statement that the crimes committed by the government of Eritrea may rise to the level of crimes against humanity and what the CoI will do about it, Mr. Smith referred to the recommendations that the Commission made in its report.

In response to a question on whether President Isaias Afwerki is personally culpable, Mr. Smith said it was hard for his Commission to state conclusively because, based on the 500 interviews conducted, it was hard to determine who was authorizing the arbitrary arrests as the arresting officers had no warrant and sometimes no uniforms.  Ms. Sheila Katheruth, a member of the Commission, who is also the Special Rapporteur to Eritrea, said that in the case of the “G-15”, government officials and parliamentarians who had been made to disappear since September 18, 2011, given their seniority, the order could only have come up from the highest power in Eritrea.

In response to a question equating the Government of Eritrea with the Government of the Democratic People’s Republic of Korea (DPRK), and whether there is “some sort of case to have a government in exile, or some sort of external… body which is trying to say how Eritrea should be run ..” Mr. Smith replied that his Commission’s mandate is different from the one given to the CoI on DPRK.  Regarding the question of whether there is a need for a government in exile given the large number of exiles and the likely response of the Government, Mr. Smith said the CoIE is “not going to step into that particular area, we make not comment on the political system… or the political future of the country, we are simply pointing out the range of abuses that are occurring as a result of the system that operates… advocating that the government should make the necessary changes so this doesn’t happen anymore…”

Asked to describe the magnitude of the problem and the size of Eritrean exiles, Mr. Smith referenced a report by UNHCR which showed that the size had doubled in 2014, compared to 2013.  Mr. Smith was unable to answer a question as to how many of those who had sought asylum had their applications approved by host countries.

A reporter who was trying to reconcile the government of Eritrea’s shoot-to-kill policy on individuals trying to escape the country with the accusation that the government also facilitates human smuggling, asked if CoIE has uncovered evidence that the Government of Eritrea is complicit in human smuggling.  The CoIE appeared uncertain and deferred to its recommendations where it had said this is something that has to be investigated as it didn’t feel it had the mandate to do it.

The following is the 25-minute video of the conference: