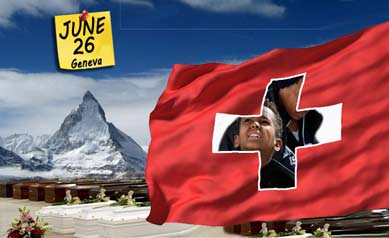 The pivot, the momentum, dear I stipulate, critical mass has been reached vis-à-vis the UN Commission of Inquiry (COI), which was published earlier last week. The larger hearing had begun this morning in Geneva, the epicenter of political earthquake reigning down on the PFDJ, it is panic time. Of course, we have seen yesterday the loyal or the coerced crowd out and about with its loud speakers and colorful images to accompany the compunction.

Prima facie, these noises may seem impressive, but dig deeper it is nothing more than desperation of the PFDJ gone busted. Yesterday’s opening remarks by the UN delegates, many of whom censured the Eritrean representative for the language unbecoming of a diplomat. The kicker was for the PFDJ to think that just because it has a wielding power over some Eritreans in Diaspora felt emboldened to intimidate and threaten Commission of Inquiry on Eritrea (CoIE) delegates in their hotel rooms. Needless to say, this did not go well for the PFDJ as several delegate attendees were ready to investigate.

Security has been beefed up in the premises. Whatever little credibility the PFDJ might have had left in its arsenal was just dashed away, save the delegate of China, which is predictable that it would come up with unsavory excuses. What matters to those of us who are on the side of justice is to do our part now and make the Amen Corner crowd appear dwarfs in comparison. But, of course, this requires discipline, organization, mobilization, all rolled into one. Can Geneva become a place of culmination in what is right with those who are on the side of uprightness? Yes it can. Yes it will. Yes if we allow it to be.

Fasting is supposed to be a time of reflection, a time of introspection – A time of purifying one’s soul. For that reason alone standing for justice in Geneva and showing our righteous indignation to the PFDJ, just one day, not only would it be inspiring, fulfilling, and straight out invigorating, but also that’s what the spirit of Ramadan would call for. To my Muslim compatriots throughout Europe, from Norway, Denmark, Sweden to Germany, France, Great Britain, and Italy; I urge you to spend a day and do your part in Geneva, and while you are at it connect with your brethren from all corners of Europe. Perhaps, Eritrean Muslims in Geneva can be your host for when you break your fast after spending the day with your brothers and sisters in Geneva seeking and supporting reasonableness on behalf of your countrymen and women. I know you do not need me to tell you that justice has been sorely missing in Eritrea, almost a quarter of a century and counting – spending one day of your fasting isn’t much to ask. In fact, that probably would go in the annals of good deeds like no other.

To all Eritrean Ethnic Groups

To the Various Regions of the Highlands

I say to you justice has no bounds, it traverses all boundaries. No Hamassen. No Seraye. No Akele-Guzai. No Logochuwa. Bring the pride of your region with you as that is your identity. After all hiding one’s identity to seek justice is contradictory in terms. Spend a day in Geneva with your intra-regional members of your society as well as with the inter-regional and inter-religious Eritreans across all geographical barriers. Plan to come for justice but stay there to network with your compatriots.

To the Gendered and not so Gendered Eritreans

I say to you come seeking for justice as justice knows no gender borders. There is no male or female when it comes to justice. Justice sees no gender as it judges based on right and wrong. Come to Geneva on the 26th of June, a day in which Eritreans from all walks of life will come seeking justice for their Eritrean brothers and sisters. This is a day of solidarity, a day in which it matters not what your gender is, but it matters a whole lot when you are seeking a lasting sociopolitical justice. Come to join your brothers in this good fight, a fight that will define the future of Eritrea as the PFDJ will not go down without a fight.

Finally, I would like to pose the following questions that I attempted to pose to the PFDJ supporter, it applies here to you justice seekers just the same:

So, all Eritreans who are seeking justice, who want to see the change they believe in, this is the first step toward reclaiming that “city upon the hill” that took thousands upon thousands of Eritrean lives, almost half a century of endless misery, this is the critical mass that had been lying in wait, the pivot of which and the momentum to which begins in Geneva – be there! No exceptions and no excuses. This is the rallying cry for all those who lost their lives that I am certain would rather have us stand shoulder to shoulder against impunity. We certainly do not want them turning in their graves in sadness and disappointment. “This”, in President Barack Obama’s words, “is our moment. America” [make that Eritrea], “we have come so far. We have seen so much. But there is so much more to do.” The 26th of June “is our chance to answer that call. This is our moment” to take Eritrea back from the jaws of tyranny and fulfill the promise of its people who paid so much with very little in return. The rule of the PFDJ is on its demise and its days are numbered, but we must all do our part by coming out in droves to show the world that the rudderless and compass-less regime must go. Must go now! Impunity no more!