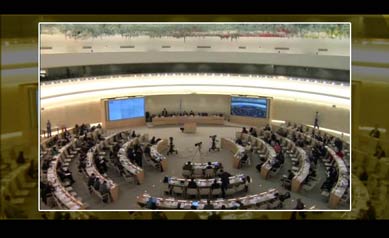 On June 23, 2015, the 23rd Meeting of the 29th Regular Session of Human Rights Council was held in Geneva, Switzerland. The interactive dialogue of the UN Human Rights Council on Eritrea was a meeting where the report of the Commission of Inquiry on Eritrea (CoIE) was openly discussed by UN member states in the presence of CoIE team: Mr. Mike Smith (Australia), Ms. Sheila B. Keetharuth (Mauritius), and Mr. Victor Dankwa (Ghana).

Several hundred supporters of the Eritrean regime were bused from across Europe to protest against the CoIE which they say is, “a tool of the USA government” and that they will “defeat it just like all previous conspiracies that tried to make Eritrea kneel down.”

In addition, it appears the angry pro-Eritrean government protest went a step further than protesting in a peaceful manner.

Reports from Geneva indicate that members of the CoIE were being threatened and intimidated since they arrived in Geneva for today’s meeting. Supporters of the Eritrean government are notorious for engaging in acts of intimidating individuals and entities they perceive to be enemies “of the government of Eritrea.” Such threats are instigated and managed by personnel from inside the Eritrean embassies around the world.

“it has been brought to my attention that the members of the commission of inquiry on Eritrea have been subjected to various threats and acts intimidation in their hotels and in the streets since their arrival in Geneva. Security around members of the commission has had to be redoubled and contacts established with the hosts country’s police. We have also taken security measures to ensure that the interactive dialogue proceed with calm and dignity. Substantive disagreement with members of the CoI or other mandate holders can always be expressed. It is however totally unacceptable for them to be subjected to threats and intimidation in the context of discharging their mandates which are established by the United Nations Human Rights Council”.

The USA delegate has stated that the harassment of the CoIE should be “fully investigated”, which was echoed by Australia and Belgium, while delegates of several other countries also expressed their dismay at the acts of threat and intimidation that the CoIE members were subjected to.

Reaction to the report

European Union delegate reacted to the report by stating, “We are deeply disturbed by your assessment that some violation may amount to crimes against humanity.” While the USA delegate stated that, “The Eritrean leadership rules through fear.”

The Australia delegation stated that “the perpetrators of such crimes must be held to account.” Focusing on tangible actions, the delegate added, “We would be interested to hear the commission’s view on mechanisms to address the accountability issues raised in its report.”

Delegates of other countries also noted their concern by the finding of the CoIE that stated crimes against humanity may have been perpetrated in Eritrea.

Djibouti, speaking on behalf of Cameroon and Somalia, called for the extension of CoIE’s mandate which very likely will be extended.

Slap on the wrist

Reacting to the undiplomatic language of Tesfamichael Gerahtu, the Ambassador of the Eritrean government, Mr. Joachim Rücker, the president of the Human Rights Council, reprimanded him by stating, “ I would like to ask the distinguished delegate from Eritrea to use a language in the future that is adequate for this council and preserves the integrity of our mechanisms. The commission is not ignorant and they do not have a sinister political agenda and this is not a travesty of justice. I must reject these formulations.”

Gedab News learned that the Swiss Federal Office of Police have already tasked a team of investigators that include senior cantonal police officers to investigate the matter. A member of the police stated that, “Switzerland takes the safety and security on UN delegates very seriously, we do not tolerate brigandage,”