Posted on November 1, 2014 by awatestaff in Awate Team 53 Comments 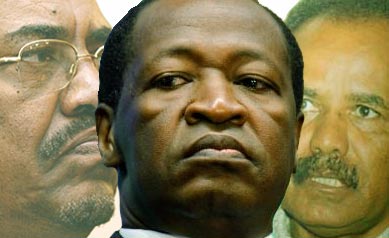 Over the last three days, we heard a beautiful African story from Burkina Faso; hopefully Eritrea and Sudan will take a lesson from it.

On October 28, 2014, protests erupted in Burkina Faso’s capital city, Ouagadougou, against President Blaise Compaoré who was awaiting a constitutional amendment by the parliament to be able to run for yet another term and extend his rule which began in 1987.

Two days later, Burkinabe protesters torched the parliament building, took over the television station and closed the airport. That action forced the parliamentarians to suspend voting.

The military forces, after dispersing in the streets to quell the protests, changed sides, dissolved the government and focused on the security of the country. A day later, on October 31, 2014, President Compaoré resigned and fled out of Ougadougou in an armored vehicle in a convoy ending his rule on the third day of the protests. General Honore Traore has taken over as president—Eritreans and Sudanese should pay attention.

Blaise Compaoré ruled Burkina Faso for 27 years; both Hassen Omer AlBashir of Sudan and Isaias Afwerki of Eritrea have been ruling their respective countries for over 20 years; both seem determined to stay in power indefinitely.

In 1989 Al Bashir became the chairman of the military council that deposed the elected government of Sadiq AlMahdi in a coup d’état. In 1994, the military council was disbanded and Al Bashir became the president of Sudan. His rule brought instability and unrest; violence engulfed Sudan affecting Darfur, Kurdufan, Eastern Sudan, and led to the cessation of Southern region. Despite his checkered record, recently he bared his intentions of running for president in 2015, to extend his 23 years rule. That would mean amending the constitution to allow him to run.

Isaias Afwerki of Eritrea is a little different; he doesn’t even believe he needs a constitution or a mandate from the people to rule. He seems to believe he has a divine right to rule indefinitely and thinks of elections and democracy as needless pretensions.

Here are four points that might help understand how he sees himself in relation to the country, its people, the presidency, or democracy:

Isaias is more like Bashar AlAsad who said, “I am not Bin Ali or Mubarek”, implying he doesn’t concedes to popular demands. Isaias doesn’t even think his arrogance and cruelty might end up taking Eritrea on the same disastrous path that has inflicted so much pain and suffering on Syrians.

Just like Bashar AlAsad, Isaias is well versed in the self-preservation game and knows that any concession from his part will certainly be escalated and lead to a downhill road that doesn’t stop. And that is why the Burkina Faso formula is the best and appropriate solution for Eritreans to end Isaias’ tyranny.

That is why Burkina Faso is an important reference for Eritreans who should learn everything about it: its swift success against a dictator, and even the trivial terminologies related to the Burkinabe people and their fresh and inspiring experience. Forcing out a power hungry man in two days, with only two lives lost, is something Eritrean skeptics and pessimist should ponder about: change doesn’t necessarily usher violence.

In 1984 under the presidency of the charismatic Captain Thomas Sankara, Upper Volta, the name given to the country by colonial France, was changed to Burkina Faso, a name that extols the people as upright and honest. Sankara was deposed and killed in a 1987 coup that was led by his then close friend and colleague, Blaise Compaore, the man whose rule ended yesterday.

Eritreans and Sudanese have seen popular protests in the Arab Spring to their North, an uprising that deposed Libya’s Muamar Gaddafi, Tunisia’s Zein AlAbdeen Bin Ali, and Egypt’s Husni Mubarek. They have seen it to their East when Ali Abdella Saleh wreaked havoc in Yemen which is still suffering from the repercussions of his rule. And now they see it to their West, in West Africa.

The Burkinabe bravery is a beautiful African story that all oppressed Africans should duplicate. Protests and demonstration are an inspiration and a right tool for the oppressed. The lack of response from the dictators to public demands is a clear sign that they do not give weight to the interest of the people but their individual ego. And that is why they have to be forced to concede and start the downhill road.

If they have a tiny bit of decency left in them, both Isaias Afwerki and Omar AlBashir should follow the route that the Burkinabe president took and abdicate before they take the people to destruction along with them. It is a must that the people and their opposition parties secure the initial concession and push them to the downhill road.