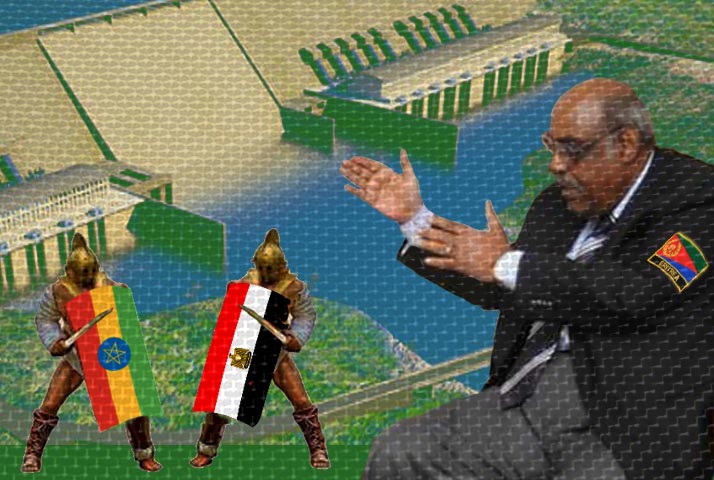 On Thursday, September 7, 2017, Al Masri Al Youm published an interview it conducted with the Eritrean ruling party ambassador in Cairo. Here we present the English version of the Arabic original, which was translated by the Awatestaff.

The Ambassador says, “some Gulf States” but given the context of the present crisis in the Arab Gulf, it is no secret he is accusing Qatar, in collaboration with the USA, is trying to make Egypt go thirsty by choking the flow of the Nile River to Egypt. Qatar used to be the main supporter of the Eritrean regime until the current Arab Gulf crisis when it betrayed Qatar.

In 2010, we have translated another interview Fasil gave to the same Al Masri Al Youm, where he made an outrageous statement telling his interviewer that, “the Egyptian security authorities who warn the Eritreans when they try to flee across their borders, something that pushes them to direct their fires to them if they do not heed to their warnings, with the aim of securing and protecting their borders.” Thus stating, that the Egyptian security forces have the right to shoot refugees crossing through the border.

That was his response to an incident where a few Eritrean refugees were shot by Egyptian security forces while crossing the Sinai desert into Israel which used to be a major escape route for Eritrean refugees. Hundreds of them fell in the hands of human traffickers—some were released after paying huge amounts of ransom while others had their human organs harvested by the criminals who roamed the Sinai desert. Many refugees managed to cross to Israel and many others have died in the desert.

The following is the recent interview, which was conducted by Samer Ibrahim for AlMasri Al Youm.
_____________
THE INTERVIEW

The Eritrean Ambassador to Cairo, Fasil Gebreselassie Tekhla, said that the relations between Egypt and Eritrea is strategic and historical and has been in good shape since the era of the late President Gamal Abdel Nasser. he pointed out that the common factor between Abdel Nasser and Abdulfatah Al Sisi lies in their sincere orientation towards Africa. But there are differences in the political conditions and factors in the region between the era of the two presidents.

in his interview with «Al-Masry Al-Youm», he added that the construction of the “Ethiopian Renaissance Dam” has no positive purposes in the interest of the Ethiopian people and that the decision to build it is political and not an economic decision. Ethiopia has a “Phobia” of Eritrea’s relationship with any other country, not only with Egypt. In addition, the Ethiopian regime wants to distract the people from [focusing] on their economic and political problems, and the idea of an external enemy is spread to them. He noted that some Western and Gulf countries are behind Ethiopia’s attempt to “make Egypt Thirsty” through the “construction of the Renaissance Dam. The full interview follows:

■ How do you see the relations between Egypt and Eritrea?

The relations between the two countries are in good shape, since the time of the late President Gamal Abdel Nasser. They are deep strategic and historical relations. Egypt has helped Eritrea in the time of its armed struggle to gain independence, and it provided us with arms, financial, and political support. It also helped our students and established a home for them. And it opened its colleges and universities for them.

■ You talked about Egypt’s support to Eritrea during the era of President Abdel Nasser. What about the relations between the two countries under President Abdel Fattah Al Sisi?

The common factor between Nasser and Al-Sisi is that they have an honest approach towards Africa, but there are differences in the political conditions and factors in the region between the eras of the two presidents. During the era of Nasser, the revolutionary tide, liberation movements and pan-Arab nationalism prevailed in the African continent. But presently, the future lies in economic exchange projects between peoples. And I believe that economic relations are what guarantees of the survival of the relations between countries, unlike political relations that can be negatively affected at any moment.

Al Sisi is also sincere in implementing the economic projects and development plans that are agreed upon. And his {recent] visit to Africa is not “a media show”. During the reign of Al Sadat and Mubarak, Egypt did not undertake a single economic project in Eritrea.

■ How do you see the Renaissance Dam crisis?

Eritrea has officially declared that the construction of the Renaissance Dam has no positive purpose in the interest of the Ethiopian people. The decision to build it is a political decision and not economic. We are not against any development project in any African country, but the dam is not for a developmental purpose.

■ What is the real purpose behind this “political goal”?

■ Who are these countries?

Any country that wants to fight Egypt will not resort to a direct military solution. This method no longer exists on the ground, so the last card in that war is to “make Egypt Thirsty.”

■Do you mean that Ethiopia wants to “make Egypt Thirsty”?

Not only Ethiopia, but some Western and [Arab] Gulf countries stand behind Ethiopia and support the construction of the Renaissance Dam. Particularly since the area where the Renaissance dam is located is not suitable for agriculture.

Here I would like to go back in history.

In 1993, in its first official representation as an independent state, Eritrea attended in one of the African conferences in Cairo, where the then Ethiopian Prime Minister Meles Zenawi was present. At the time, the relation between the two countries was excellent. And here Zenawi presented an idea: Just like the Arabs sell oil to us, we sell water to all countries. The Eritrean president strongly rejected the proposal, and here, the late General Omar Suleiman, the former head of the General Intelligence responded to him. He said to Zenawi: “And who are you to say that?”

■What is your position on the Entebbe Agreement?

Void, in accordance with previous international treaties relating to the Nile Basin countries.

■ Some political analysts said that Eritrea is the best party to exert pressure on Ethiopia because of the old war between them, and deepening relations between [Eritrea] and Egypt carries signals and messages that will quickly reach Ethiopia. What are your views?

Ethiopia has a “Phobia” of Eritrea’s relationship with any other country, not just Egypt. In addition, the Ethiopian regime wants to distract the people from [focusing] on their economic and political problems. The idea of an external enemy is spread to them. As an example, Ethiopia benefited a lot internally from the meeting that the former President Mohamed Morsi held with the national forces to discuss the crisis of the dam, to amplify the idea among the Ethiopian people. The more Eritrea works to strengthen its relationship with Egypt, Ethiopia accuses us that we will help Egypt to target the dam militarily through our territory. This is not a talk of nations, but “child play”.

In fact, Egypt does not want to target the dam militarily, at all. And it has no political gains in this matter. All African countries will not allow that, nor will we allow the use of our territories to achieve those goals. Despite the differences between Ethiopia and Eritrea, Egypt is free to establish strategic relations with any country of its choice, even with Ethiopia, because that is a political right of Egypt, and we have nothing to do with it.

■ What are your views regarding some media reports that were published in a number of foreign newspapers that Egypt has snatched Eritrea’s consent to establish a military naval base in its land?

Not everything that is published in newspapers is true. There is some news that is a mere “testing balloons”, and others are leaked on behalf of some Western intelligence services.

Our main disagreement with America is Eritrea’s refusal to establish a military base on its soil. If we had agreed to that request, we could have avoided many wars and international pressures on us. Our country does not make political concessions to any country, whatever type of relationship we have with them.

The Eritrean regime wants the Egyptian role to return again in Africa, not for our personal interests, but first for the interest of Egypt. If we look at the Suez Canal, we find that its security and the security of the global trade movement starts from the South [of the Red Sea]. A large part of the victory of the war of October 6 [1973 war over Sinai] is because of the important role played by the Egyptian naval forces in maintaining the security of the South [mouth of the Red Sea]. It is high time to highlight the role of Egypt and its emergence more than it is in the region.

■ What do you mean by “highlighting the Egyptian role” in the South?

■ What caused [Eritrea’s] differences with Ethiopia?

In 1993, the state of Eritrea was officially declared a state and we started to strengthen our foreign relations with the rest of the world countries. And here America began to set its conditions for us to return the American military base to our country again, in addition to providing some facilities in the Red Sea waters. We totally rejected the demands because we do not give up our right to decide freely, and our the sovereignty of our territories. Moreover, Eritrea is the only country that officially condemned the US invasion of Somalia. The League of Arab States did not issue a statement condemning that invasion. Even Mubarak said, “We understand” and he didn’t condemn the invasion. This is the biggest proof that the political decision at the time was not in Egypt’s hands.

All these reasons prompted Ethiopia to create a conflict with our country and occupied a border area called “Badme” to give us a harsh lesson, and to achieve many Ethiopian and American gains in the region. Following these events, the summit of Algeria was held, and America is the one who drafted the border demarcation agreement between Ethiopia and {Eritrea] from A to Z. And the three most important points of the agreement  that the border dispute is the responsibility of the International Court of Justice, and that the decision of the Court is final and binding to the parties, and any country that refuses to implement the resolution will face a number of international sanctions on it. The purpose of those points was to cripple Eritrea, because America was expecting the judgment would be issued in favor of Ethiopia. But contrary to the American expectations, the court ruled that the occupied territories are Eritrean territories and Ethiopia must withdraw from them. The border was demarcated in its new form, but Ethiopia refused to withdraw and implement the court’s decision. And since that time, the crisis is still pending between us because the solution is in the hands of America, which is the only country capable of getting Ethiopia out of our country.
_______________