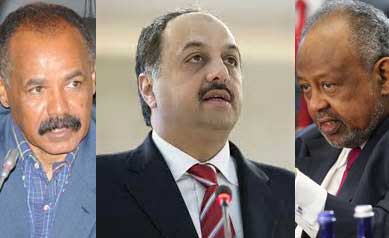 Isaias Afwerki of Eritrea has put the Qataris in yet another embarrassing situation. Dr. Khalid Bin Mohammad Al Attiyah, Qatar’s foreign minister, “has returned empty handed after a secret visit to Asmara.” Isaias Afwerki had promised to release the Djiboutian prisoners of war and hand them over to Qatar. Al Attiyah was supposed to bring along the Djiboutian POWs when he returned to Qatar.

Eritrea has been holding Djiboutian POW’s since its border clash with Djibouti. While Djibouti released Eritrean POWs caught during the 2008 border clashes, Eritrea has yet to reciprocate.

In 2010, a mediation agreement was signed by the two countries under the auspices of the Qatari Government. Since then, Qatar has stationed its forces on the border between the two countries and has made extensive diplomatic efforts to resolve the border issue. However, after more than four years, the mediation efforts are yet to bear fruit. Diplomatic sources indicate that it is very likely Djibouti will officially withdraw from the Qatari brokered mediation.

After several weeks of parallel Qatari diplomatic communication with both of Eritrea and Djibouti, and messages from Isaias Afwerki assuring Qatar his willingness to release the POWs, last week, the Qatari foreign minister hoped to return with the Djiboutian POWs when he flew to Asmara. He returned empty handed.

A source close to the Eritrean government told Gedab News, “I didn’t think Isaias will receive the Qatari foreign minister... oftentimes he sets an appointment for a meeting but cancels it at the last minute claiming to be busy or sick. That is why there are always rumors about his health conditions, that he creates himself.”

The source added, “between April 2-013 and April 2014 Isaias cancelled his visit to Qatar three times while Qatar covered up for him by taking responsibility for the postponement of the visits.”

Earlier in the talks, Isaias Afwerki had requested a face-to-face meeting between him and President Ismail Guelleh of Djibouti in Doha, Qatar, to be held on November 25, 2014, after which he promised to release the prisoners and hand them over to Qatar. That was rejected by Ismail Guelleh who adamantly refuses to meet Isaias before the POWs are released.

It took Qatar’s diplomats weeks of efforts to convince Isaias to release the prisoners after which they promised to hold the face to face meeting he proposed for normalization with Djibouti. But when the Qatari foreign minister arrived in Asmara to receive the prisoners, Isaias denied he had any Djiboutian prisoners and said the only prisoner Eritrea had was Master Corporal Ahmed Abdullah Kamil and he was already released to Qatar.

In its Resolution 2182, of October 2014, the United Nations Security Council stressed, “its demand that Eritrea make available information pertaining to Djiboutian combatants missing in action since the clashes of June 2008 so that those concerned may ascertain the presence and conditions of the Djiboutian prisoners of war.”

Observers say that, “it is very likely that Qatar will finally wash its hands from the mediation agreement and will not object to escalating the issue to UN.”

A diplomat who asked the “Eritrean foreign minister” for information was dumbfounded when minister Osman Saleh replied, “I know nothing about the prisoners or the Djiboutian border case, it is handled by Isaias personally.”

When traveling outside Eritrea on a diplomatic mission, Osman Saleh is always accompanied by Yemane Gebreab, the political adviser of Isaias Afwerki. It is believed that “Osman is a mere symbolic figure while Yemane is the real minister of foreign affairs.”

The Cracks That Isaias Used

After a divergence in foreign policies among the Gulf Arab states that escalated to summoning of several ambassadors from Doha to return home, last week Qatar and the Gulf states mended fences and the ambassadors who were recalled returned to Doha. The differences mainly centered around the the Gulf countries’ policies towards Egypt, mainly represented by the policies of Qatar and Saudi Arabia. While Qatar supported the deposed government of Mohammed Mursi, the previous president of Egypt, the other Gulf countries recognized the current government of president Abdul Fatah Al Sisi.

A Gulf Arab diplomat said, “Isaias used the crack between the Gulf countries to feed on their differences, now the door is shut and he cannot feed on it anymore.”

In the hope of aligning his position with the policies of Egypt, Isaias immediately started to cajole the deposed president Mursi and did the same when president Abdul Fatah Al Sisi became the Egyptian president.

Fasil Gebreselasse, Isaias’ ambassador to Egypt, has been instigating to inflame the Ethiopian-Egyptian relations by depending on the technical differences between the two countries over the construction of the Ethiopian Renaissance Dam. An Egyptian website quoting the ambassador stated, “Fasil Gebreselasse warned Egyptian authorities not to trust Ethiopia’s promise regarding the Renaissance Dam.”

Asked to comment on the news, an Ethiopian source said, “the Ethiopia Egyptian relations… has advanced so much that such a desperate attempt by Isaias and his ambassador does not have the ability to disrupt it.”