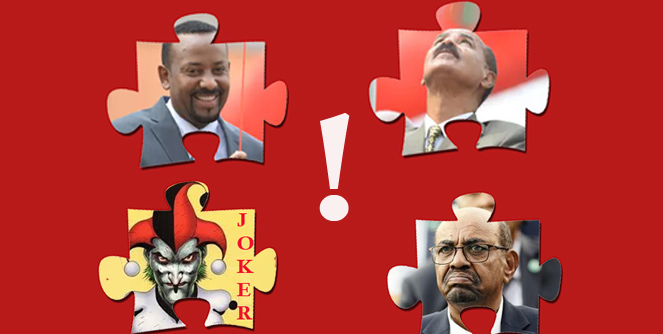 Since early 2018, the Horn of Africa region has been going through dramatic developments. The shaky security situation could get worse before it gets better if it does.

In Ethiopia, though popular uprising has forced changes, there is fear that some of the mobs could be thinking of running the country forever by sidelining the federal government. The risk is that such developments could push the government into becoming dictatorial. In Sudan, the confrontation between the people and the Al-Bashir government has deteriorated so much it seems the country is on a bumpy road for the umpteenth time. In Eritrea, nothing changes because the weakest link to change has proven to be the most difficult challenge. The police state that is insulated by fear and coercion has survived all the winds of change, how long the weakest link will survive before it snaps, is anybody’s guess.

The following is a news digest of the situation in Sudan, Ethiopia, Eritrea and other developments in the Red Sea Basin.

On December 31, 2018, South Sudan had announced the partial resumption of oil drilling from the damaged wells in its territories. Drilling is expected to resume on January 19, 2019, and is expected to partially cover the local fuel needs. Oil drilling was stopped five-years ago due to military conflicts and political squabbled between South Sudan and Sudan. The conflict led to South Sudan’s separation in 2011.

South Sudan claims the production stopped because of high acid content in the oil wells and technicians had to reduce the acid that caused corrosion of pipes and other installations. It’s expected to drill 20,000 barrels per day. Before the drilling stopped, South Sudan used to produce around 350,000 barrels per day

Meanwhile, Al-Bashir’s government accused the media, particularly Satellite television stations of fabricating news scenes and agitating the public. Tens of people have lost their lives during the protests as security forces used tear gas and live ammunition to disperse the protesters. Sudan harshly criticized the media and threatened to curb its activities in covering the protests that “jeopardize the security of the nation.” Though the main target is believed to be Al-Jazeera television station, a correspondent of the London based Al-Arabia television station has been expelled from the country. Sudan has also warned local television stations not to air reports from local reporters about the protests. On the other hand, Sudanese activists have demonstrated in front of the Aljazeera office in London for disregarding the Sudanese protests.

According to government sources, some robberies and looting had occurred during the protests. But some lawmakers have pointed to the excessive use of live ammunition by the security forces against the protesters.

Though the protests started in Khartoum and Atbara, the capital of the River Nile State region where the anti-government demonstration erupted on 19 December 2018, it has spread to Omdurman, Port Sudan. The protests have spread throughout of Sudan and lately is spread in Gedaref, an agricultural town close to the Ethiopian and Eritrean border where large numbers of protesters took to the streets.

On Sunday, Jan 6, demonstrators marching to the presidential palace to demand from President Omer al-Bashir to step down were stopped by security forces. Riot police arrested many protesters, including university teachers and journalists. The protests that were triggered by economic failures, mainly the increase of bread and fuel costs, has been escalated to a demand to remove Omar Al Bashir who has refused to abduct power.

Sudanese security forces on cars without plates roamed the populated areas of Khartoum to disperse crowds who were preparing to march to the presidential palace. However, large crowds managed to break the police cordon and marched to the palace where they chanted anti-government slogans until they were dispersed with tear gas and live ammunition.

While the Al-Bashir government has managed to organize its supporters, who rallied in support of Al-Bashir, major opposition parties have declared their determination not to stop protesting until Al-Bashir steps down. Several dialogues between political parties, a major one in 2013, has not produced a fruitful outcome as Sudan continues to suffer from worsening economic hardships. Al-Bashir came to power in 1989 backed by Islamist forces and toppled the democratically elected government of Saddiq Al-Mahdi.

The recent protests have attracted a huge number of women, mostly young students and professionals. An unprecedented number of professors also joined the protests. Many of them were arrested.

On Wednesday, Al Bashir along with his party apparatchiks and government officials joined a rally surrounded by heavily armed forces. It was the first pro-government rally since the recent protests started on Dec 19. The rally that was carried out at the Green Park was organized to counter the anti-Al-Bashir protests and it attracted about 800 people. Internet connections and Mobile phone networks were blocked around the park as soon as Al Bashir arrived.

In an impromptu speech, the embattled Al-Bashir singled out China, Russia, Kuwait UAE, and Qatar, for standing behind him. However, he still vows to stay in power regardless of the popular protests demanding his removal.

However, in a statement issued on January 9, Western Troika–the United Kingdom, Norway, the United States–and Canada, have called for the respect of human rights without declaring their position on the demand of the protesters. Yet, they cautioned the government could be sanctioned if it didn’t stop arbitrary arrests and the use of force to disperse the protesters. They also warned Sudan’s actions will impact the relationship with other countries in the future.

The Humera-Omhager border crossing which was informally opened last summer was closed on August 4 without announcement after it remained open for a few weeks. The Eritrean-Ethiopian border has been closed since the 1998-2000 war.

The major Zalambessa-Serha crossing in the central region was also opened in September but it was suddenly closed two weeks ago without explanation.

On Jan 6 the border crossing at Omhajer-Humera was opened again with fanfare in the presence of Abiy Ahmed and Isaias Afwerki. The opening is supposedly based on “article 3 of the Joint Declaration of Peace and Friendship” which a government official mentioned, though no Eritrean or Ethiopian knows the details of the agreement signed on July 9 between Abiy Ahmed and Isaias Afwerki.

PM Abiy Ahmed had landed in Tesseney where he arrived with a delegation to attend the OmHajer-Humera border crossing ceremony. The PM’s delegation included Dr. Debretsion Ghebremicheal, the president of the Tigray state and Mr. Gedu Andargachew

Meanwhile, residents around the town of Shire in the North of the country blocked, for the second time in a week, an armed force contingent from leaving the border region over security concerns. They wanted the forces to stay put expressing border security concerns with Eritrea. The forces are now stranded in the stadium of the town. The forces were moving heavy equipment from the border town of Zalambessa, a crossing point between Eritrea and Ethiopia. The border town was recently closed without announcement.

PM Abiy said he recognized the right of citizens to ask the reason for the deployments assuring the people the government will defend the region if it was attacked. However, he stressed only the government has the absolute right to move the national forces based on security and defense needs.

The blocking of the army has stirred controversy among partisan Ethiopians who accuse the Tigray region’s ruling party, the TPLF, of orchestrating the move. A parliamentarian referred to the action as a ‘detention’ of the army, which again stirred more controversy. According to reports, the use of the word ‘detention’ incensed the Deputy Chief of Staff who said, “no one can detain the defense forces.” At the same time, he acknowledged the government of Tigray has no hand in the move by the people who blocked the forces.

PM Abiy Ahmed and Isaias Afwerki have signed a number of trade and economic agreements including the use of the Eritrean port of Assab. In August 2018, Ethiopian media reported about the UAE plan to build an oil pipeline that runs from Assab to Addis Ababa. The UAE maintains a military presence in Assab from where its fighter planes fly bombing sorties against the Houthi Forces in Yemen. The plan to construct the pipeline was announced in Addis Ababa soon after the Ethiopia Prime Minister Abiy Ahmed met Ms. Reem Al Hashimy, the state minister for the UAE’s international cooperation.

On December 12, 2018, Saudi Arabia invited five Red Sea basin and Gulf of Aden countries to discuss the formation of an alliance. Representatives of Sudan, Djibouti, Somalia, Yemen, and Jordan met with the Saudi hosts.

The shipping lanes in the red Sea are of vital strategic importance to the Gulf States and the industrial world. It is not known why Eritrea which controls over six hundred miles of the Red Sea coast and about 200 islands, was not invited.

On November 2014, Isaias Afwerki had floated an initiative to discuss the security of the Red Sea with the countries of the region. However, the Arab countries gave Isaias’ initiative a cold shoulder and politely hushed it. Fasil Gebreselasse, the Eritrean ambassador to Cairo explained that the failure of the initiative was due to the Arab concern about involving Israel in the security of the Red Sea. Though Isaias has primarily invited Egypt and Saudi Arabia and he also sent feelers to several other countries along the Red Sea–none of them was interested at the time.