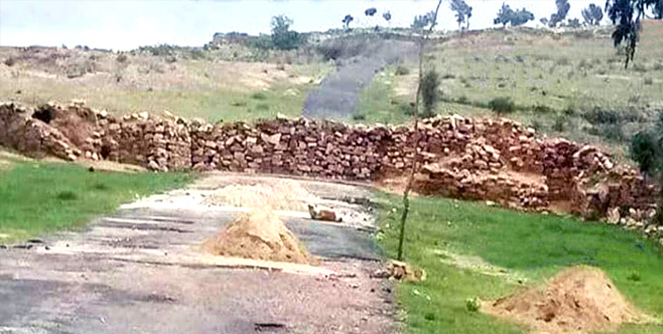 A little over three months after it was haphazardly opened, the Ethiopian-Eritrean Border was closed from the Eritrean side which now requires Ethiopians to have entry permits. The decision to close the border was passed to the Eritrean border guards on Christmas Eve.

The Eritrean side didn’t explain the change of policy and now requires permits issued by the Federal Ethiopian Government. Similarly, Ethiopian authorities stated they have no official information regarding the Eritrean decisión.

The border remained closed since the two countries went to war between 1998-2000, a gruesome war in which over a hundred thousand people were killed. In addition, hundreds of thousands of people were displaced from their villages and some of them still live in makeshift camps.

Until recently, the borders were guarded by soldiers who were on a shoot-to-kill order. Many Eritreans escaping the country to avoid the indefinite military service, poor employment prospects, and severe violations of human rights, were shot and killed while crossing the border.

However, since September 10, a border crossing checkpoint at Zalambessa-Serha, in the central region, was opened following the agreement between Isaias Afwerki of Eritrea and the Ethiopian prime minister, Dr. Abiy Ahmed. People and goods were allowed to move across the border freely with no permits or visas.

Immediately after the border was opened, thousands of Eritreans rushed to Ethiopia to take advantage of the border opening either to travel further and join family members in foreign lands, or in search of better employment and educational prospects for themselves.

At the same time, Ethiopians crowded the streets of Eritrean cities as tourists, or to meet long-separated family members, while merchants flooded the markets that suffered from an acute shortage of different merchandise.
Another border crossing checkpoint that was briefly opened between the Ethiopian town of Humera and the Eritrean town of Um-Hajer over the Tekezze River was closed on the beginning of August 2018.

Still another crossing point at Bure south of the Eritrean port of Assab is either closed or open depending on unpredictable intermittent decisions by the Eritrean authorities.

The border also has also faced problems related to Exchange rates between the currencies of the two countries since neither of the two governments had planned for it ahead of time.

Since the border opened, over 30,000 Eritreans have crossed to Ethiopia on a one-way journey.

The reason for the two days old decision by Eritrea is believed to have been triggered by the attempt on the life of general Sebhat’s on December 19, 2018. Dozens of colonels and other lower rank officers suspected of being part of a plot to overthrow Isaias Afwki’s government have been arrested. Their fate is still unknown.

Over the last few days, PFDJ trolls on social media have accused the TPLF of being behind the plot to “disrupt Eritrean security” and of masterminding the attempt on general Sebhat Efrem’s life.

Currently, the situation in Eritrea is reminiscent of the pre-1998 border war period when the war of words and public agitation was at its highest. Now, taking advantage of the proliferation of social media, the agitation is being escalated on a daily basis.

Both the Eritrean government and the Ethiopian federal government are waging relentless media wars and exerting political pressure on the TPLF of Tigray region, which occupies most of the area between the two countries.