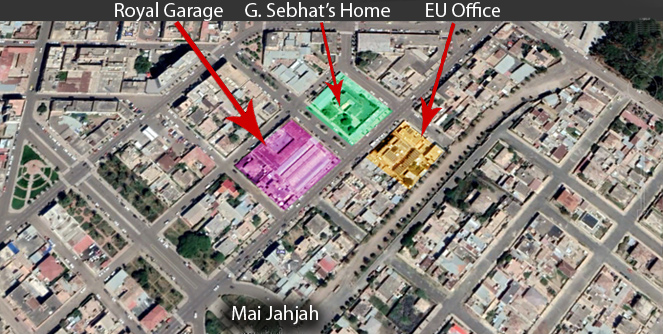 The assailant was apprehended by soldiers standing guard outside the European Union offices located across the street from the general’s residence.

Cries coming out of the general’s residence had alerted the guards who reportedly chased the assailant (or assailants) and caught him.

The general was reportedly accompanied by the president’s doctor and is now being treated at a military hospital in the UAE.

The incident that involved the general exposed Eritrea’s tightly closed nature. Even such an incident involving a top military officer, a four-star general, has created conflicting news. Five days after it happened, the state media is still quiet about it except for Isaias Afwerki’s ambassador in Japan who wished the general well in an orphan tweet.

One version of the story claims there was a second assailant who was apprehended in the city later in the day. The assailants are allegedly sympathizers of a clandestine anti-PFDJ military group.

This is the second such attempt on the life of a general since October 2007 when General Simon Gebredingel survived an attempt on his life. The 2007 incident was a result of a turf war between top military brass who wanted to safeguard their business interests. Many Eritreans believe General Sibhat became a target in a case of a similar nature.

Reliable sources informed Gedab News the assailant was trained at Sawa’s First round batch, and according to PFDJ sources, he had recently returned from Ethiopia after the border was opened. It’s not known whether he had fled to Ethiopia earlier or has left legally.

On December 14, 2018, scores of middle-ranking military officers were arrested while Isaias Afwerki was on a visit to Somalia.

According to officers and public servants who now live in exile, General Sebhat played a similar role in foiling the reform attempts of the G-13, G-15, and the Forto uprising of 2012.

According to a source, the conditions of General Sebhat Efrem was described as critical but stable. However, the situation in Asmara remains fluid as speculations about the motive of the assault on the general and its implications to the regime’s senior-leaders long-term survivability are swirling on the Internet. A caller from Asmara said, “the brazen broad daylight  attempt sent chills down the spine of the regime leaders and the diehard supporters.”

The flow of People and Information

Since a peace agreement was reached between the Ethiopian prime minister and Isaias Afwerki in June 2018, the borders between the two countries are wide open and have become porous.

An unprecedented number of Eritreans cross to Ethiopia daily, while Ethiopian tourists and merchants have found unrestricted entry to Eritrea.

Since the border was opened, about 30,000 Eritreans have sought refuge in Ethiopia taking advantage of the open borders. Until recently, crossing the border proved fatal to many Eritreans who attempted to cross it illegally.

Similarly, the twice a day flight provided by Ethiopian airlines between Addis Ababa and Asmara transports hundreds of Ethiopians to Eritrea where they require little or no visa restrictions to enter.

With the recent increase in the flow of people in and out of Eritrea, the regime is still able to conceal what is going on inside Eritrea as it did since it took power in 1991. However, it doesn’t seem it will be able to control the flow of information for too long..

According to Bloomberg, Eritrea is the world’s least connected country where less than 0.9 % of the residents have access to the Internet. In comparison, Somalia and Ethiopia have Internet penetration rates of 1.51%, 1.61%, respectively.