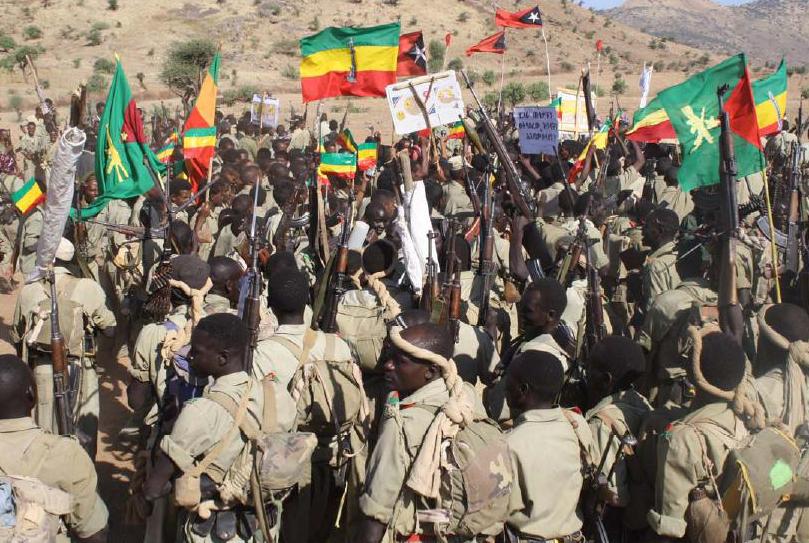 The Tigray People’s Democratic Movement (TPDM, known by its Tigrinya accornym De.M.H.T.) is one of half a dozen Ethiopian opposition groups stationed in Eritrea whose mission statement appears to have changed from bringing change to Ethiopia to fighting change in Eritrea by being President Isaias Afwerki’s last enforcement unit.

Over the weekend, TPDM was dispatched to Asmara to conduct routine roundup of Eritrean youth who have to be mobilized for military enlistment.  In previous dispatches, only TPDM members with passable Eritrean Tigrinya accents were recruited to conduct the roundup.  In this patricular mission, there appears to have been a breakdown and TPDM members with noticeable Tigrayan accents were roaming the Merkato neighborhood of Asmara and asking for “metawekia” and “mewasawesi“–Ethiopian words for “moving permit”– whose Eritrean version is “tessera” and “menkesakesi” respectively.

In the ensuing altercation among Asmara residents and TPDM, shots were fired near Hamasien Restaurant.

A TPDM soldier who was wounded by stone-throwing Eritreans was treated in Orota Hospital. When asked for his identification, he disclosed that he is an Ethiopian national and gave his address as Alla (near Dekemhare) and gave the name of his Eritrean handler.

Since the incident, the Isaias Afwerki regime has gone on full information-management campaign:

1. The area of the conflict was repeatedly visited by Brigadier General Teklai Kifle ( “Manjus”) and his deputy, Brigadier General Fitzum “wedi Memher.”   Both manage, among other things, the Ethiopian opposition based in Eritrea, and both are intensely loyal to President Isaias Afwerki.

2. Eritrean security officials locked down schools to inform them that those who conducted the round-up campaigns were Eritreans and the rumors that they are TPDM soldiers are not true;

3. In the neighborhood “zoba” (local administration) units, meetings were called with Asmara residents to tell them that those who conducted the roundup are actually members of Eritrea’s  “525” commando unit.

TPDM along with the Ogaden National Liberation Front (ONLF), the Oromo Liberation Front (OLF), the Afar Revolutionary Democratic Unity Front (ARDUF) and Ginbot Sebat (May 7th movement) all have received a base and training in Eritrea for nearly a decade.

On December 2009 (resolution 1907),  and again in December 2011 (resolution 2023) the United Nations empowered a group (Somalia Eritrea Monitoring Group) to monitor and report on Eritrea’s destabilizing activities in the Horn, particularly in Somalia and Ethiopia, and specifically forbade Eritrea to host opposition groups of neighboring countries.

Since then, many of the Eritrea-based Ethiopian opposition groups have either gone underground or have been severely weakened by Ethiopian security officials.

The one exception to this has been TPDM, which is now rumored to be Africa’s largest guerrilla force.

The “guerrila” force is a misnomer because it has been 4 years since it attempted any military campaigns against Ethiopia and is now essentially an Eritrea-based Ethiopian group with an Eritrea-based mission:

1.  Its base used to be at Harena, in the Eritrea-Ethiopia-Sudan border (Southwest Eritrea), near Humera, Ethiopia.  It has been moved to Alla, near Dekemhare.  This happened after Ethiopia’s March and April 2012 forray into Eritrea, where it conducted two raids and destroyed the bases of TPDM.  Now, the organization moves around Dekemhare, Mai Aini and Asmera–far from its alleged military targets: Ethiopian soldiers.

The move is also due to the Monitoring Group’s expose: officially, the Eritrean regime’s position is that there is “no evidence” that it hosts Ethiopian opposition groups.  Unofficially, it wants to assure its followers that it has managed to train a large Ethiopian guerilla forces capable of delivering what it has promised its supporters (and the Ethiopian opposition) for 12 years: the removal of Tigray People’s Liberation Front (TPLF), or “Weyane”, the core of Ethiopia’s ruling coalition, from power.

2. Almost all of the revenues generated from Bisha Mining were used to train, arm, equip, headquarter and maintain TPDM. There is stark difference between the living conditions of TPDM and that of Eritrea’s regular army, the Eritrean Defense Forces.  In meetings EDF officers had with Isaias Afwerki in Sawa last year, the Eritrean president repeatedly warned that EDF should not expect any change in its living conditions as revenues from Bisha Mining have already been appropriated.

3. As a fighting force, the Eritrean Defense Forces are practically non-existent.  EDF has been hallowed up by desertion by the thousands and what remains is a demoralized force and powerless officers focused more on self-enrichment than military cohesion.

4. The “people’s army” which was set up by Isaias Afwerki as an alternative to EDF is incapable of being his line of defense: they are the parents and grandparents of the youth they are ordered to “round up”–now considered a mortal threat–and they would not be capable of it: with little or no military training, they are not capable of doing anything more than protecting passive assets (banks, government buildings) and they are not part of any contingency plan to control crowds.

5. It appears that De.M.H.T. is Isaias Afwerki’s last line of defense, the same model that was used in Libya, Mali and Central African Republic: bringing foreign power with no hesitation of pulling the trigger against local citizenry.   However, the incident of last weekend appears to have been a miscalculation–the ground was not prepared to psychologically orient the people that “Tigrayans are our brothers”–and now, the security apparatus– Wedi Kassa, Simon Gebredengel, Tesfaldet Habteselasse, Manjus and Wedi Memher–is in full damage control mode.